EDITOR’S NOTE: It’s that time of year again! The annual Roaring 20s party at the Crane Estate in Ipswich, MA, promises to be bigger and better than ever!  This year’s event is happening Aug. 3 and 4. Click here for all the details.

Below is our story from 2018’s garden party!

IPSWICH, MA, Aug. 31, 2018 – As you walk up the hill to Crane Hill castle, bags inspected and tickets issued, a fluttering of excitement bubbles in the air. Wailing clarinets accompany a lazy version of 1933s I Hate To Wait performed by a live band, hearkening an era of glamour, elegance, and euphoria perfectly complimented by the meticulous 2,100-acre Crane Estate grounds. Antique vehicles wind through the landscape with their signature clicking engine, ooaga horns, and spoked white-walled tires transporting jubilant fans to the exceptional splendor of the Jazz Age, while reveling in complete immersion with spirits past.

Given the Gilded Age era grounds, one would never know they are in the present, except for the occasional observers clothed in modern garb breaking the illusion.

Created by Mike Hibarger of Boston Swing Central the annual Roaring Twenties Lawn Party is a fundraiser for the non-profit organization whose sole mission is to educate the public of the 1920s dance, the Lindy Hop.

Hibarger took time out to speak with me during this year’s party — which took place Aug. 3-4 —about his love of dance and efforts behind the Roaring Twenties party. It goes back to his early days, and his affinity for the nostalgic.

“As a kid I was always collecting these old things, I was a weird kid. I always had that thread going through my life. One day I saw an article in Boston Globe about swing dancing, and I thought that is so much better than club dancing. If I went to a club and asked someone to dance they would be tuned out, I thought that is not elegant, this is not interpersonal interaction with somebody, it didn’t feel very connected so I thought if I was swing dancing then I could actually do something that would be kind of cool at the time,” says Hibarger.

Convinced he needed a partner, Hibarger had a conversation with a young woman at a party who, unbeknownst to him at the time, serendipitously attended a Lindy Hop class every Tuesday and invited him to join her.

“After that class I never looked back,” Hibarger says, who cites his top jazz influences as Fats Waller and Count Basie.

“Hearing Count Basie and Fats Waller is just amazing, to me he was the Jay Z of his time. He was a virtuoso of the piano, he would sing a ballad and it would be beautiful,” Hibarger says.

Educated by the late, remarkable King of the Lindy Hop, Frankie Manning, master choreographer and an original member of the Whiteys Lindy Hop Troupe of the 1930s,” Hibarger feels it is his calling to keep the tradition thriving.

“It’s lost unless we keep it alive. The Roaring Twenties Lawn party is an extension of this.  Where else can I have a Lindy Hop festival with two stages and 3,000-plus people attending? People watch shows like Dancing With The Stars and they think it’s so cool; I want people to know they can do this. I want to say, ‘go on this journey — you will experience epiphanies, you will connect in a different way. I owe it to Frankie Manning to keep it alive. I learned from him. He was such a positive amazing person. He inspired me a lot.  I am a caretaker of it,” says Hibarger, his admiration, showing.

Most look back on the 1920s with a nostalgic lens; however the Jazz Age was actually an exciting combination of violence (think Al Capone), reckless abandon and sexual freedom. The closest era to this would be the Disco era of the 1970s as it mirrors its all-inclusive decadence. Instrumental in its origin, jazz was praised by young fans and oppressed by older onlookers.

It is imperative to remember that at the time, jazz was an entirely new sound, birthed from the blues of the deep South, primarily in New Orleans.  Jazz’s free-flowing form, accompanied with a raunchy undertone, fostered an “anything goes” attitude (Cole Porter wrote a song named Anything Goes specifically about the 1920s) — an era unwelcome by the generation prior, as its liberating expression led to “risque” women’s fashions, where skirts were shorter than had ever been in history, and ushering in the Flapper, an empowered woman who indulged in liberties of all sorts — something unheard of for the “lesser sex” during this historical time frame.

In fact, in the decade prior, ankle-length hemlines were the “modern” fashion. Fringe dresses of the ’20s accented dance movements that were meant to punctuate the feeling of reckless abandonment. For the first time in history in America, races intermingled on a social level and the  prohibition of alcohol led to underground nightclubs called Speakeasies, adding to its already titillating allure, all during a financial era where money poured from every orifice, allowing a young demographic a lifestyle never before seen in American history. 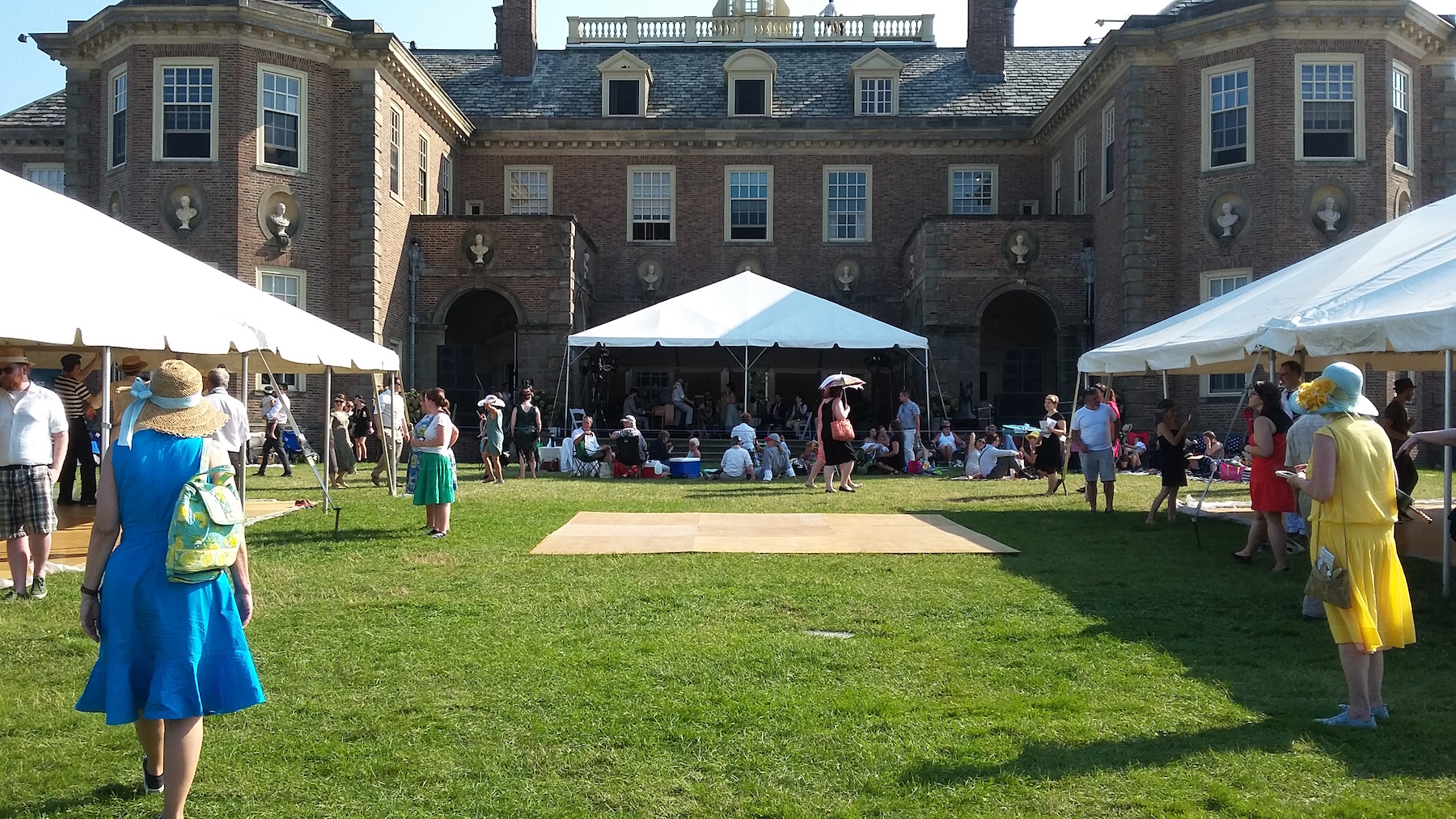 Held over the course of a weekend, and in its sixth year – with attendance swelling to over 3,000 revelers – Hibarger’s lawn party not only perpetuates itself through proceeds, but Hibarger also reaches out to children in the community, educating them about jazz and the Lindy Hop — nurturing the next generation of attendees.

Patrons set up picnic areas, from simple blankets to more elaborate awning-covered staging. The upper lawn is flanked by participants on both sides, and this is the area to see and be seen. Compliments are excitedly exchanged as attendees sashay up the middle while onlookers enjoy people-watching, silently rating the authenticity of costuming, separating “real” fans from novices.  Ladies glitter in the afternoon sun dressed in sequins, feathers and of course the obvious flapper fringe. Men are clean, sharp and tailored as friendly faces greet strangers and an atmosphere of languid ease surrounds the grandeur.

The estate instinctively sweeps one into the main area, where vintage vendors gather under a massive tent, complete with indoor chandeliers. Two dance floors, each flanking the stage where the live band performs, both comfortably accommodate partners and singles alike, allowing enough space for the Waltz, the Charleston and of course the Lindy Hop.

Participants surrender to the enjoyment of a lazy summer afternoon, bathed in elegance. After reveling in the entertainment, enjoy a languid walk along the half-mile rolling lawn where stress dissipates.  At its end, in turning to look back at the estate, an immediate likeness to the Great Gatsby comes to mind. Patrons abandon their belongings without a thought for their safe keeping while they are enraptured with the sheer beauty of Ipswich’s own Crane Estate.

Crane Estate’s picturesque grounds and Grande Allee promenade are the idyllic venue for parasoled ladies, cloched hats, suspenders and bow ties. The 59-room, 30,000 square foot castle, built in the late 1920s, Crane Castle was a summer home of the “Cranes” whose fortunes were amassed through the plumbing industry.

Hibarger, invited me to participate in the class happening that night, which I did. Partners were exchanged every few minutes, and with each new pairing, all were greeted with smiles and quick introductions. Simply put, it was fun.

As class was ending, I was surprised to see a slew of new participants entering through the doors, almost doubling the current number of attendees. With no respect for demographic, cultural origin or age, fans gather, connected by the common thread of the admiration of an era and “the” dance.  The transparency of like-minded individuals gathering for the sheer connectivity of the event was clearly evident, as delighted partners switched with each song.

As I sat back and scanned the dance floor, I realized that every person, in genuine authenticity, was smiling … or was getting ready too. A sense of innocent playfulness hovered as guests instinctively dropped their defenses in exchange for heartfelt honest human connection.

“I want people to have happy feet! Dance culture has so many things to learn and experience, you realize nonverbal communication,” Hibarger says, with quiet steadfastness. “Take the lesson.”

With that, Hibarger honors his mentor as he maintains the message of Frankie Manning, still written on his heart:

“When you are dancing with your partner, for that two-and-a-half minutes you are in love with each other.  You are corresponding with each other by the moves that you make –  it’s a love affair between you and your partner and the music.  I’m not interested in fame or glory. It’s just that I want people to know what a happy dance this is.” — Frankie Manning 1917-2009