MANCHESTER, NH – Police are looking for a thief whose face was captured on surveillance footage after grabbing a purse belonging to an on-duty nurse and stealing cash and credit cards.

On Dec. 17 at approximately 5:20 p.m. a nurse who was tending to a patient in another room discovered that her purse, which was in an unsecured room within 15 feet of where she was treating her patient, had been stolen. 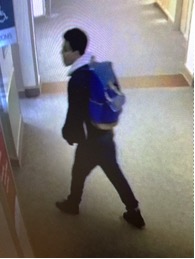 She noticed her purse was missing when she returned to the room so she reported the theft to hospital security. Manchester Police were dispatched, and officers spoke with both the victim and security staff members. Security staff located the purse inside a men’s bathroom prior to police arrival.

The thief removed three credit cards and cash, but left behind her personal and work cell phones. Several still photographs were taken from the hospital security camera of the suspect,  a male with black hair and glasses, who appears to be between 20 and 30 years old. He was last seen wearing a black Northface jacket with a gray hooded sweatshirt, jeans and a blue backpack.