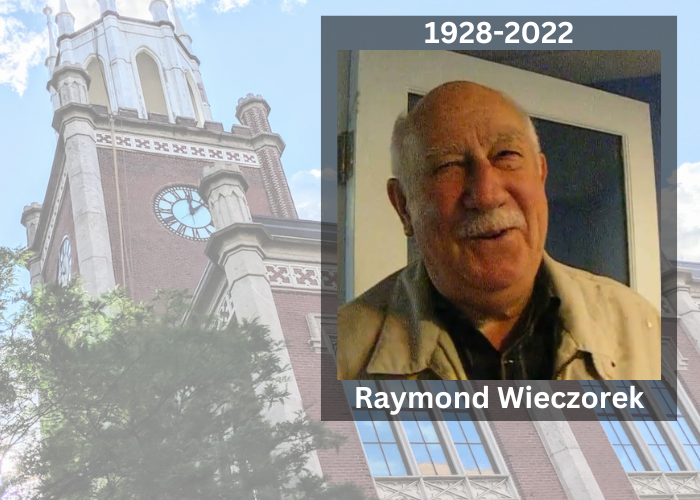 MANCHESTER, NH – He served the city he loved for a decade as mayor, and then the state for another decade as an Executive Councilor, but Ray Wiczorek’s spirit of dedication, pride and good humor extends well beyond his political service. His death Wednesday at the age of 93 wasn’t a shock to anyone aware of his declining health, but it marks a somber end of an era for the city which has lost one of its most influential and beloved leaders.

“There’s a great lesson in politics to be learned from Ray,” said Bob Baines, a democrat who beat Wieczorek, a republican, in the city’s 1999 mayoral race.

“When I was principal at West no one was more supportive of me than Ray, and while I did run against him for mayor, at the end of the day after the dust settled we became friends and we remained friends,” Baines said. “We need to see more of that today. Even though you are political rivals you can put that aside and keep serving the city, It was an honor to serve with him and losing him is a great loss for our family, a personal loss. We’re sad for the entire Wieczorek family.”

Baines served with Wieczorek on the Manchester Public Television board, along with fellow former mayor Sylvio Dupuis and former city alderman Dave Wihby. Former mayor Bill Cashin, who passed away in April of 2021, was also part of that board.

“Bill Cashin was chair of that meeting and at the end of his life we were meeting at Bill’s house because of his health issues. We’ve been meeting at Ray’s house lately for the same reasons,” Baines said. “I have to say being in a room with Bill Cashin, Sylvio Dupuis, Ray Wieczorek, and Dave Wihby three or four times a year was some of the best times I’ve ever had in my life. We had so much fun, especially with the banter between us.”

Wihby last saw Wieczorek last Thursday, just before leaving for Florida for the winter. He says he regarded Wieczorek as a father figure and mentor as much as a friend.

“Ray knew his health was failing. I told him I’d see him soon when he got to Florida, and he said, “if I make it,” which tells me maybe he felt things were winding down. He had that sense of humor to the end, though. Like last week he said ‘If only I had six more years as mayor,’ and I said, ‘You had 10! That was a lot more than most others,’ and he said, ‘I just needed six more to fix everything’,” Wihby said. “He and Bob would banter back and forth about their friendly rivalry but there was never a hard feeling between them.”

Wieczorek’s tenure produced the largest group of mayoral papers in the city’s municipal archives, accounting for 75 cubic feet of correspondence, reports, memos, brochures, contracts, programs and pamphlets.  And it’s no wonder, as the five-term mayor, often referred to as “Wiz,” oversaw the redevelopment of the Amoskeag Millyard and the Manchester-Boston Regional Airport as well as the creation of the civic center in downtown, now the SNHU Arena, credited with the economic rebirth of the city following the collapse of the banking industry in the early 1990s.

“When we went through those tough times when banks closed down and it was a deserted place, the city faced so many challenges. Ray held firm and held his own with his critics and made recommendations that brought us through those times,” Baines said. “The civic center was a political hot potato and the community was divided but he fought through that. Yet here we are today – that arena became a catalyst for the revitalization of the city. And even today, with the downtown becoming the center of activity with 2,000 apartments coming, a lot of that success can be traced back to Ray’s leadership.”

Prior to his political service Wieczorek was a prominent figure in other aspects of the city. He moved to the city in the late 1950s to raise his family, and had an insurance business. He served as director and president of the Manchester Scholarship Foundation in the mid-1970s, and was a founding father of the Manchester Housing and Redevelopment Authority, serving as chairman from 1986-89.

“Despite his age and his health, Ray was still very active and sharp as a tack,” Stewart said. During their visit they reminisced about Wieczorek’s time as mayor and the many challenges he faced.

“He had some great funny stories to tell – some of them part of the public record and some of them not,” Stewart said. Their paths first crossed in the mid-2000s, when Stewart worked for Manchester Neighborhood Housing Services – now known as Neighborworks Southern NH.

“Ray brought that to the city to help revitalize center city in the 1990s. I was a community services specialist and he was one of the incorporators of the organization,” Stewart said.

It may have been coincidental that Wieczorek found a home on Ray Street, when he moved here in 1958. But it was quite a deliberate honor when in 2011 the new three-mile highway connecting the Everett Turnpike to the Boston-Manchester Regional Airport was named Raymond Wieczorek Drive. It was a nod to his dedication and influence in the airport’s development.

He would have celebrated his 94th birthday on Dec. 9.

Within hours of the news of Wieczorek’s death on Wednesday, the condolences were circulating around social media:

“Ray Wieczorek served with a smile. As Mayor of Manchester and as an Executive Councilor, Ray took the time to listen and connect with his constituents one on one. He leaves behind a legacy that will inspire many for decades to come. But most importantly, Ray was my friend. Always there and never wavering. Valerie and I will miss him dearly.”

“I am saddened to hear of the passing of former Mayor Raymond Wieczorek. Mayor Wieczorek cared deeply about this city, and many of our beloved institutions, like the Manchester-Boston Regional Airport and the SNHU Arena, were made possible by his hard work. My thoughts are with his family and loved ones during this difficult time.”

“Susan and I are saddened at the passing of Ray Wieczorek after a lifetime of service to the City of Manchester and State of New Hampshire.

As Mayor, Executive Councilor, and after his time in elected office, Ray always had the biggest smile and an eagerness to work together to address New Hampshire’s challenges. He was truly one of the Granite State’s finest citizens and he will be missed. Our thoughts and prayers are with the Wieczorek family.”

I’m saddened to learn of the passing of Ray Wieczorek. Ray was a dedicated public servant and strong advocate for Manchester as Mayor and Executive Councilor. My thoughts are with his family and all who knew him at this difficult time.

For all the words assigned to Wieczorek by those who knew him best – funny, passionate, dedicated, focused – Wihby gets the last word.

“Ray was my friend, but he was much more. He was also a father figure. Sometimes he’d yell at me about the things I should have done, or didn’t do, but he was somebody who clearly you could see loved and cared about you – and the city, and just so many people. I don’t know anyone who might have a bad word about Ray,” Wihby said, fighting through the emotion brewing just below the surface. “He was a gentleman and a friend. I’m going to miss him.”