“Do you entertain plans of ever leaving this city?” asks exasperated horse trader Colonel G. Stonehill of vexatious Mattie Ross, a young woman looking to bring her father’s murderer to justice

“Yes, I am off early tomorrow morning for the Indian nation,” she says. “Marshal Rooster Cogburn and I are going after the murderer, Tom Chaney.”

“Cogburn. How did you light on that greasy vagabond?”

“They say he has grit,” Mattie replies. “I wanted a man with grit.”

With that declaration, young Mattie Ross sets off on her Big Screen adventure. She has hired an aging, eye-patch-wearing lawman to track down the killer of her father.  Cogburn is infamous for his willingness to shoot the blood letters and bad men he pursues under the shield of The Law.

The movie is “True Grit,” the true “True Grit,” and moviegoers will get to see the classic in theaters this week with four showing, on May 5 and May 8 (see below for details), when it is re-released to commemorate its 50th anniversary.  Rooster Cogburn is played by an actor who was the greatest star in the history of Westerns, a silver screen legend whom many consider the greatest movie star ever.

“For you who can’t read the number on my back, I’m John Wayne. I’m an American movie actor, and I work with my clothes on.”  The audience resonated with applause from attendees at the 42nd Academy Awards ceremony.

“I have to. Horses are rough on your legs. And on your elsewhere.”

It was 1970 and Midnight Cowboy, which was not a Western, was about to become the first and only X-rated movie to win the Best Picture Oscar. And John Wayne was about to win his only Academy Award for playing the one-eyed sexagenarian Marshal Rooster Cogburn in True Grit. The true True Grit.

Social media has resonated recently with revelations about a 1971 Playboy interview, in which John Wayne made politically incorrect remarks about African Americans and Native Americans. Wayne’s views were well known in his lifetime. By the late 1960s, he was extremely controversial due to his rightwing – some would say, reactionary – politics. His support of the Vietnam War was notorious, particularly in light of his failure to serve in the military during World War Two.

John Wayne was unrepentant. “I’m an American movie actor,” he told the Oscar audience. Nothing could be truer. For better, or worse, in his strengths and weaknesses, John Wayne symbolized America as no other movie star ever had or ever will.  John Wayne had grit. True grit.

“That’s the way the movies are,” Bob Hope said in his opening Oscar ceremony monologue. “Duke Wayne’s been around for years but nominated with him is Jon Voight, whose only motion picture experience was two years ago when he was a blood donor for Vincent Price.”

Jon Voight had corralled his own Oscar nomination playing a kind of drugstore cowboy, the would-be male hustler Joe Buck, a role that required him to be seen in the nude more frequently than had any other actor in a major motion picture. In Midnight Cowboy, Joe Buck – bedecked in cowboy drag – takes a bus from Texas to New York City, intending to score with women for money.

“I ain’t a real cowboy,” Joe tells one New Yorker. “But I am one helluva stud!”

Joe’s dream of being a male prostitute catering to rich ladies turns into a nightmare. He eventually winds up living in a condemned building with the petty thief Ratso Rizzo, played by Oscar-nominated Dustin Hoffman. Ratso addresses Joe Buck’s lack of success by attacking his cowboy persona.

“I know enough to know that that great big, dumb cowboy crap of yours don’t appeal to nobody except every Jackie on 42nd Street. That’s faggot stuff!” Ratso shouts. “You wanna call it by its name? That’s strictly for fags!”

A perplexed Joe Buck shouts back, “John Wayne! You wanna tell me he’s a fag!?”

That year’s Oscars were probably the first and only time that one Best Actor nominee referenced another nominee on film in the same year. Such was John Wayne’s prominence as a cultural figure.

If you’ve seen the Cohen Bros.’ 2010 remake, you’ve seen a movie that is remarkably faithful to the 1969 True Grit, and a little more faithful to the book. The Cohen Bros.’ remake was unnecessary, not just because True Grit already had been made, and made very well, but because no other actor could play a role created by John Wayne, a role so identified with him. Perhaps Clint Eastwood could have done it. The again, as great and as legendary as Clint is, no other actor was as synonymous with the Western and America as was John Wayne.

When True Grit was released in 1969, a moviegoer could see a real Western at a real movie theater, not a homage like the Cohen Bros.’ remake. The original True Grit was made by director Henry Hathaway and star John Wayne, two moviemakers who started in silent pictures and participated in the evolution of the Western genre in the sound era. This is the real thing.

Jeff Bridges played Rooster Coburn in the remake, and while he is a helluva movie actor and a treasure in his own right, Jeff Bridges is no John Wayne. No one was, except for the man who played him, Marion Morrison. An actor and man with true grit.

Enter The Duke, The Legend

The man who would beat out Dustin Hoffman and Jon Voight for the Academy Award for Best Performance by an Actor in a Leading Role was called “The Duke” by friends and co-workers who knew him from the time he was Marion Morrison. That was the name he was born with. Ironically, the “John Wayne” hero-worshipped by Joe Buck was Marion Morrison in his own cowboy drag. But where Joe Buck failed, Marion Morrison succeeded.

Morrison was a University of Southern California football player who, along with his close friend and teammate (and frequent future co-star) Ward Bond (known to Baby Boomers as the master of TV’s Wagon Train), got odd jobs in the movies at the end of the silent era. From moving props, he moved on up to being an extra, then to real acting gigs.

Knowing they had the makings of a star, the studio decided to rename him “Anthony Wayne” after a Revolutionary War general. But “Anthony” was considered too foreign sounding by one studio flunky. So, “John Wayne” was born. But it was Duke Morrison who created the persona “John Wayne,” and then lived it.

True Grit was released the same year as Butch Cassidy and the Sundance Kid, a monster hit that spoofed the Western genre with goofy humor. The song “Raindrops Keep Fallin’ on My Head” won an Oscar, as did William Goldman’s screenplay.  Duke Wayne himself handed out the Best Cinematography Oscar to Conrad Hall for Butch Cassidy.

True Grit was made in the classic style, but with a twist.  It was a role unlike any John Wayne had ever played before: A a fat, old ne’er do well, who even swore! Rooster Cogburn even shoots a man in the back! It was John Wayne spoofing “John Wayne,” the character he had created for nearly 40 years in a career that had defined the movie cowboy and defined American itself. Audiences and the Academy loved it.

In 1969, American legend John Wayne playing a character legendary in its own right with all the foibles of the real person behind the school textbook legends, was revolutionary and transgressive. In that, it was of a kind with such movies as Midnight Cowboy that changed American cinema forever, by depicting life with greater realism, no matter how sordid.

Here we have a legend, warts and all.  A character with plenty of bad to go along with plenty of good. A character illustrative of Abraham Lincoln’s wish for the “better angels of our nature” to triumph. Something more akin to John Wayne, the actor and human being, the subject of much love as well as much controversy.

See for yourself. True Grit is coming back to the big screen this week to celebrate the 50th anniversary of this John Wayne classic. Beautifully shot by master cinematographer Lucien Ballard, True Grit has a wonderful script played to perfection by such first-rate character actors as Jeff Corey, Bruce Dern and Strother Martin. There is also a memorable villain played by the great Robert Duvall.

Since producer Hal Wallis, himself a legend having produced such great classics as Casablanca (1942), refused the salary demands of Elvis Presley, country-singer Glen Campbell makes his movie debut in True Grit. Glen plays the Texas Ranger who helps Rooster and Mattie get their man. He also sings the title song, “Some Days Little Girl.”

Robert Duvall, a future Oscar winner himself who ranks with Gene Hackman as one of the supreme character-lead actors of the movies, plays the villain Ned Pepper, a notorious outlaw who let the killer of Mattie’s father become part of his gang.  Robert Duvall’s Red Pepper and three members of his gang face off against John Wayne’s Rooster Cogburn at the film’s climax. The odds of 4-1 seem prohibitive to everyone, except fans of John Wayne and The Duke himself.

“What’s your intention?” Pepper asks Cogburn. “Do you think one on four is a dogfall?”

“I mean to kill you in one minute, Ned. Or see you hanged in Fort Smith at Judge Parker’s convenience. Which’ll it be?”

“I call that bold talk for a one-eyed fat man,” Pepper replies.

And for the first time in Silver Screen History, the great John Wayne swears: “Fill your hand, you son of a bitch!” The Duke as Cogburn grips his horse’s reins with his teeth so he can take on the four villains while both packing firearms in both fists: A Winchester repeating rifle and a Colt .45, two guns that won the West.

You’ll have to go the screening of True Grit to see how it all turns out. Unlike the decades of movie bad men who crossed paths with the legendary John Wayne, you won’t regret it. 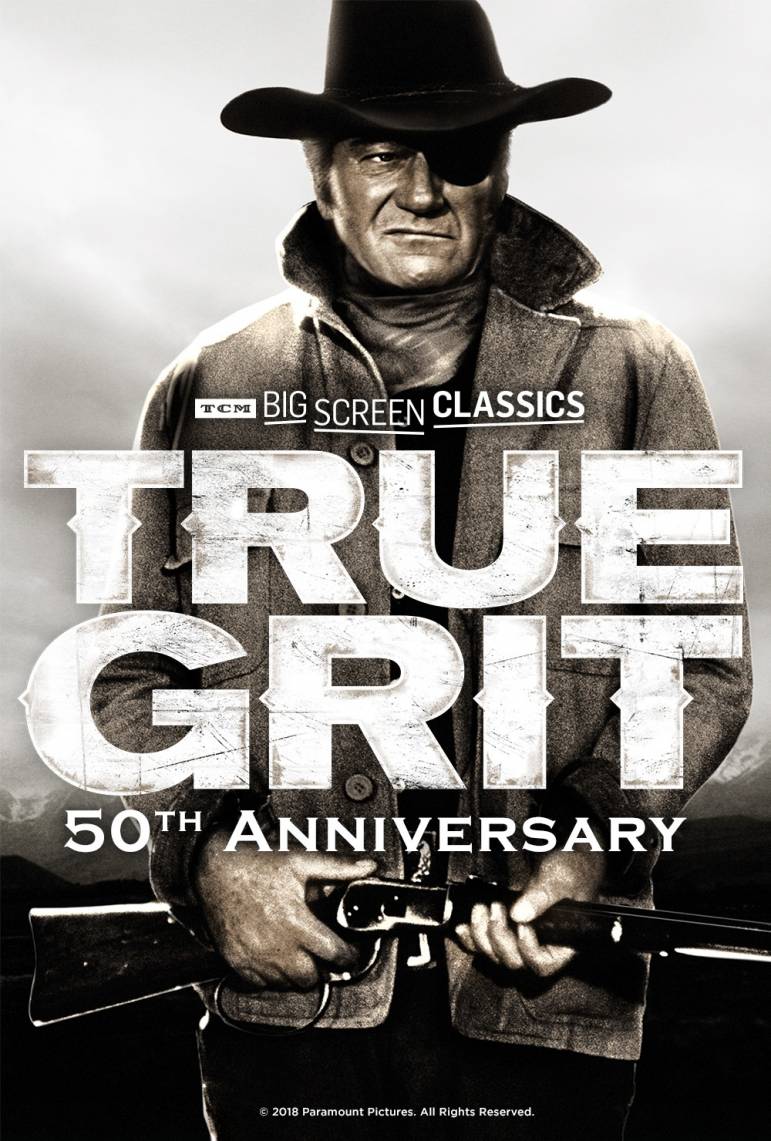 Fathom Events brings  “True Grit” to the big screen in NH. Check the website for all New Hampshire showings.

You can catch it locally on the following dates and times:

Jon Hopwood is a freelance writer from Manchester.