Here’s a slice of sage advice: Don’t harass Mike Tyson on an airplane.

A cell phone video of one of Mensa’s finest prodding, agitating and eventually throwing a water bottle at the former-heavyweight champion on a plane made its rounds on social media.

The result of said encounter was predictable enough.

Tyson kicked the shit out of the bibulous buffoon, thus reinforcing the age-old lesson that provoking a man who once routinely knocked out many of the world’s elite pugilists is patently unwise.

Unless you’re someone capable of standing toe-to-toe with Tyson.

Not to toot my own horn[1], but some 25 years ago, in a living room in a quiet Rhode Island-suburb, I kicked Mike Tyson’s ass.

I had recently received my first Nintendo Entertainment System (NES) as a Christmas gift in 1986. The system included the console, two controllers[2] and a copy of “Super Mario Brothers.”

Like a prepubescent moth falling in love with an illuminated bulb, I knew—in the marrow of my bones—that I’d found my calling with my Nintendo. But it wasn’t until my parents purchased “Mike Tyson’s Punch-Out” for my 12th birthday[3] that I would actualize my role in the universe.

I soon discovered that I was…a video game fighter. 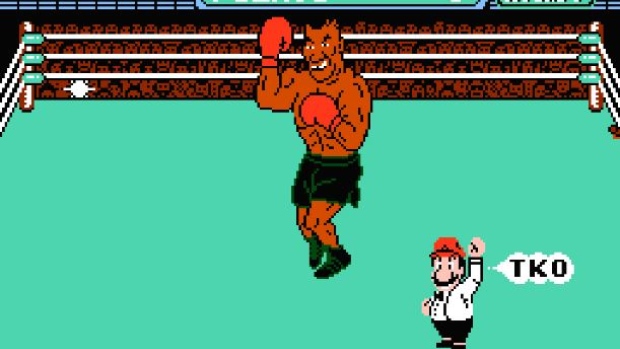 Hours upon hours a day went toward my training[4] as I honed my skills pummeling my weaker adversaries—Don Flamenco and Von Kaiser, you wasted my time. But some of my opponents gave me fits and, at times, had me contemplating quitting[5].

For example, I had trouble timing Bald Bull’s charge; Soda Popinski channeled all of my Cold War rage and was a slippery Commie; and The Sandman was immensely intimidating, his massive frame swallowing nearly the entire frame[6].

Did Tyson scare me with his flurry of haymakers that would send me to the canvas if they connected in the first 90 seconds on the fight? Did I doubt my ability to beat Tyson? Did I have any homework that I should’ve been working on instead?

Mike Tyson knocked me down, he knocked me out many times, he made me question my resolve as a man[9], but he never broke my 12-year-old spirit.

Then, on an otherwise ordinary Thursday night in my parents’ house, it happened.

No one saw me beat him the first time. It was 1987, and I couldn’t record a video so my friends needed to take me at my word[11]. Yet to this day, it remains one of the greatest achievements of my lifetime.

My guess is that the ninny on the airplane did not know how formidable an opponent he was facing with Iron Mike. Maybe the ninny never knew the abject humiliation, the rare discouragement of watching Tyson flex in the center of the ring, and wink after dropping him—ending the game, the quest, the dream.

Or maybe the guy was just a drunken jack-ass.

[1] My wife often says that if humility took a human form, it would look exactly like me.

[2] I did not get the system that came with the “Duck Hunt” gun.

[3] The dates here might be somewhat specious. I was laser-focused on beating Mike Tyson. I had tunnel-vision and didn’t have the time to fret over frivolities.

[4] Technically, I was a character named Little Mac, but Little Mac bore a striking resemblance to a 12-year-old Nate Graziano. I believe can all agree that this was no coincidence.

[5] I swore off the game multiple times, perhaps noticing some menacing patterns of addiction.

[6] Truth be told, I’m still frightened of The Sandman.

[7] Eventually, I happened upon a pass-code that would bring me directly to Super Macho Man, which was a tremendous relief, seeing fighting The Sandman was always iffy.

[8] After Tyson was knocked out by Buster Douglas in 1990, Nintendo removed Tyson’s character from the game, correctly assuming his image was sullied.

[9] I was late to start puberty, so at this point, I didn’t have girls and curves to distract me from my goals. Of course, all of the aforementioned questions could be applied—without slight modifications—to the pursuit of finding a girlfriend.

[10] Years later, when living with my buddy Jon in our mid-20s, we both tried to relive our childhood glory and beat Tyson again. I also started dating my wife at the same time, and she would come over to our apartment and watch Jon and me fight Tyson. I don’t think she was all that impressed, nor do I know why she agreed to marry me after said bouts.

[11] I understand why many people might not believe me. The incidents of young boys lying about beating Mike Tyson’s ass were epidemic at the time. I would, however, beat Tyson again at my friend Jim’s house with Jim watching. I never knocked out Mike Tyson, however. I always beat him on decision.