With communities buzzing about the most recent culture war on Critical Race Theory, I’ve had the chance to attend several school board meetings where there were people either outside or inside school board buildings protesting something they know little about. I don’t want to get bogged down in the term, who wants to use it and who doesn’t, I just want to see our communities understand how the racism of the past still exists today, embedded in all aspects of our society and is harming all of us including those who think racism may be benefiting them.

Let me explain what I mean. For way too long those classified as white in our communities were handed a story that they are the inheritors of a great nation and if they are struggling it is because of those different from them – often Brown and Black people.  Some have accepted this narrative and are open about their negative feelings towards Brown and Black communities, while others do not openly admit their biases or negative feelings, they nevertheless carry them and at times these biases manifest in ways they don’t recognize as stemming from deep racist beliefs they hold, often unintentionally. For those who accept that they could be holding biases that need examination and work to be dismantled, there are so many groups and books that can help people explore the ways we are conditioned to see others in our society as harmful or threatening. Those who decide never to examine their biases are at risk of continuing to feed into the negative feelings they already have.

Because there is an intentional strategy being deployed by elites that is meant to divide people and keep us blaming each other instead of examining the real threat and harm to all our lives. Nothing brought this home to me more than on August  9th at a Nashua school board meeting. A white supremacist group showed up covering their faces, chanting and screaming. I watched them for a few hours as counter-protesters stood bravely against them. Some of these white supremacists were recognized and apparently, it was even known how some of them had been fired from their working-class jobs. Without taking away from the fact that white supremacists cause real harm and violence to our communities – and we should never downplay this reality – something happened while watching them. It became very clear to me that these people were actually really hurting and I began to wonder if their convictions were more about their fear than their hate. Could it be that they had come to accept that people like me and other Brown and Black community members were just the easiest scapegoats to blame for their problems because this is what they were being fed by FOX News and others?

As I sat watching these deeply angry people, I thought, “Wow, their anger is justified against the system that doesn’t allow them to thrive, but their anger is misplaced.” I so badly wanted to tell them, “What harms you is harming our communities too. What if we link arms and organize against those who convinced us we are our own enemies while they continue to benefit from the distraction of blaming each other?” Let’s organize against the elites who prop a system that pays poverty wages while they continue to fill their pockets with our earned labor, or the real drug dealers in the form of pharmaceutical companies that benefit from charging unaffordable prices and push medicine that will ensure they continue to rake in money? Or the elites who have convinced us that the problem is affirmative action instead of the fact that college is inaccessible to the majority of people in this country so that they can keep a grip on ensuring the status quo and continue to benefit on the backs of the majority.

The truth is that in the richest country in the world we can’t have nice things because of extreme inequities that are embedded in the economic system. Powerful interests have rigged the political system and strategically used racism to keep the rest of us divided. In their version of things we are told that every step towards racial justice is a step backward for white families, but this is not a zero-sum game. It is only with cross-racial solidarity will we be able to create a political mandate for high-quality universal health care for everyone. If White, Black and Brown working and middle-class communities came together there is nothing we couldn’t accomplish.

While linking arms against those behind the curtains – the elites – may be far from happening now, given how well orchestrated this cultural race war has become, I’m still holding on to a glimmer of that possibility. I still hold on to the hope of seeing the unrealized promise of this country of being a true multiracial democracy where everyone can thrive and prosper. To get there we need to reckon with our past and present reality, but we also need to unite across the lines that have been used to divide us. This is a future worth fighting for. Please join us. 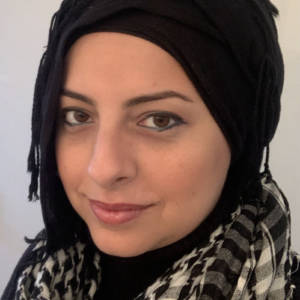 Asma Elhuni is a proud Muslim-American and is the Movement Politics Director for Rights & Democracy New Hampshire [and is helping lead the NH Unites For Truth campaign learn more at rights-democracy.org/nhunites.