Preface: About two hours after I finished writing the essay you are about to read, my daughter slipped in our driveway, taking a digger into the rough asphalt and gravel. The result was an evening in ER as a kind and patient doctor meticulously plucked tiny pieces of rock out of Little Bean’s knee. No stitches, but a pretty decent wound that will still be healing as you read this.

Also, she earned something to take home.

“I can give you the rock,” the doctor said to my teary-eyed daughter, who nodded.

The final, largest pebble, pulled out of her knee, now sits in a jar as part of her rock collection; a tiny little black stone. In all the permeations of the universe, for my daughter’s knee to find that little bit of rock in the way it did… well, that was a keeper.

“It’s a souvenir,” my daughter said.

A trophy to how remarkably tough she can be.

I tell you this as a past prologue to the tale ahead. You’ll see why. 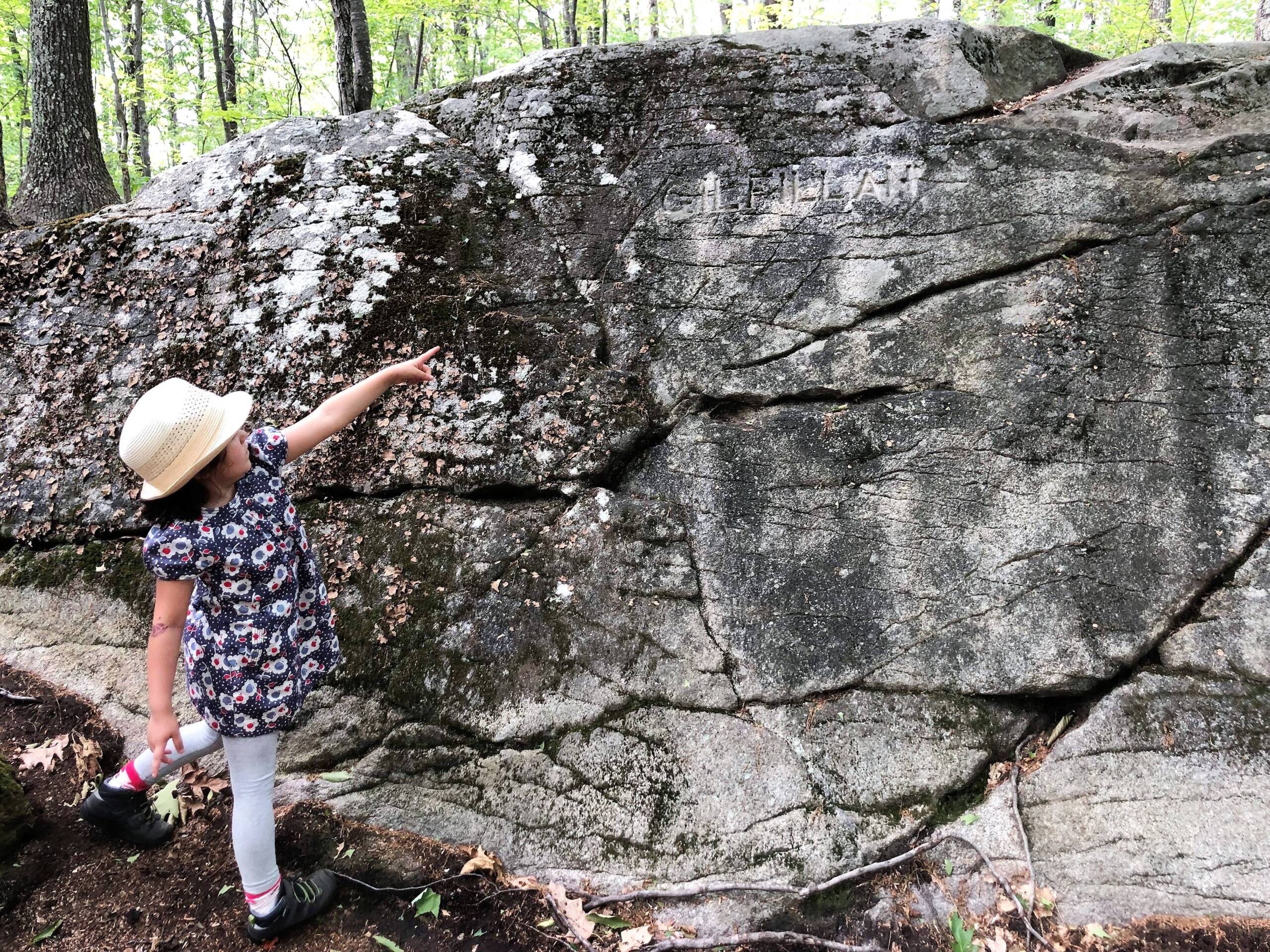 My daughter has found a lucky rock.

Not any rock mind you. We are near the summit of Jerry Hill in Concord, N.H, exploring a great ledge called Gilfillan. The ledge juts sharply out of the earth, rising perhaps 10 feet up over the nearby trail. There are dozens of names and initials carved into the top of the rock. But only one name is carved into the cliff side: Gilfillan.

The name is thought to belong to Joseph Gilfillan, a popular 15-year-old who died in 1893. Joseph and his friends from nearby Saint Paul’s School would frequent Jerry Hill and the rock. After he died, other names started appearing in the ledge. Over the years, the rock has taken on the feel of a sort of alter for kids.

Today is no different. I decide to add a new layer to the ritual of this particular rock. I tell my daughter that this is protector rock.

“Find a small stone and take it with you for luck,” I say.

“Do you like this one, daddy?” Little Bean asks. The stone is flat and small, fitting comfortably into her palm. The token is flecked with, perhaps, mica.

“Perfect,” I say and she slips it into her pocket

We are all, in some way or another, affected by rock. No matter our upbringing or location, I’m willing to bet that we all have a rock story or two.

I have three. The first took place when I was about 5 years old, slipping while playing on a large boulder and shattering my knee against the pebbly surface. That escapade earned me an hour’s worth of a doctor pulling gravel out of my knee, along with five stitches. That event also propelled me toward a life-long respect and interest in the hard surfaces we often take for granted. 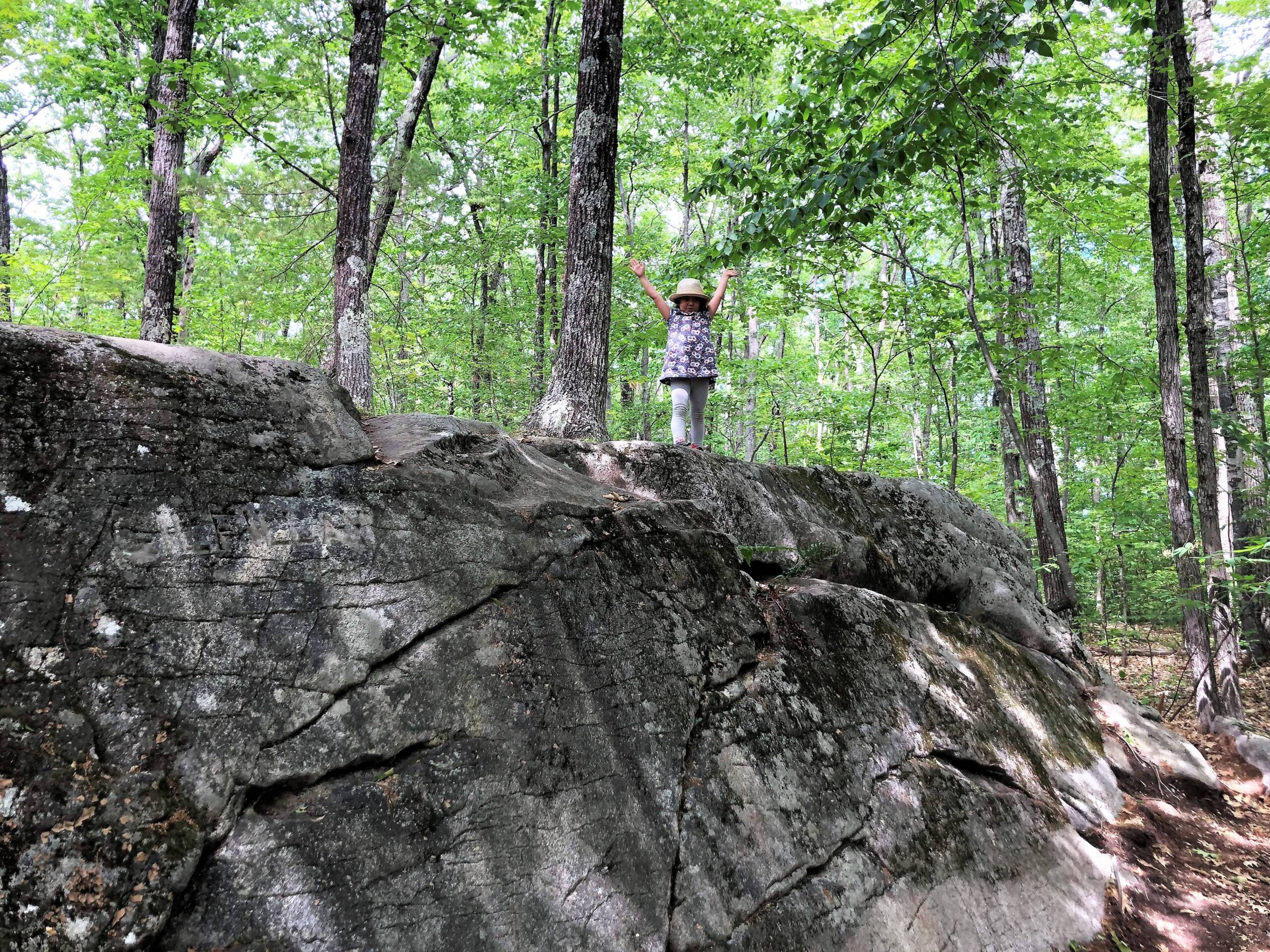 My second significant brush with rocks took place when I had to come home to clean out my father’s house after he had left. I found my old jar of rocks, tucked neatly away under his workbench. When we had the estate sale, I advertised for sale “A can of random rocks.” And the people came, so many asking specifically to see the rocks. I gave them out, one rock to everyone who passed through my childhood home. I hope some of the folks still carry them.

Finally, today, Little Bean and I are developing a NH Rocks That Rock hiking quest and field guide, turning our love of boulders into a game anyone who loves nature can play. Why not share our love of rocks with others?

Back at Gilfillan, Little Bean tucks the stone into a little sample case that we carry with us on these excursions, and crouches down to read some of the other names carved into the top of the rock. She runs her fingers over some of the names – Parker, Jed, Liz – kids not much older than her, a century ago performing the same communion with the ancient ledge.

Writer and geologist Lauret Savoy, in her book “Trace: Memory, History, Race and the American Landscape,” defines geology not only as grasping for an understanding of the earth under our feet, but also as attempting to understand our place on Earth.

This is where we are then; in a small park, alone my daughter and I, but surrounded by the ghosts of a century of children, running our hands over the million-year-old hardened stardust of a boulder that connects us to the soil.

The small sign near the rock speaks of Joseph Gilfillan, but regards us all: “A good life hath but few days; but a good name endureth forever.”

The rock will endure, more children will come, and now, my daughter is a child of that legacy, embedded forever in spirit in the eternal language of the rock.