In the beginning – this was back about the time that God created the heaven and the earth – a guy named Dick Clark created ”American Bandstand.” So I guess that means we have to go way back, back to before the beginning, if we’re going to talk about ”The Donn Tibbetts Show.”

Imagine this concept: A televised dance show for teenagers. Someone will play records, the kids are going to dance and they’re going to show the whole shindig on television.

Of course, things have changed since Donn was New England’s first television DJ. Back then, ”rap” was something you did on a door. Back then, guys and gals and assorted hep cats did The Stroll and The Bop and The Bunny Hop, early primitive dance steps that begat The Chicken, The Monkey, The Pony and Serious Chiropractic Irregularities.

Instead of the dances, it’s the bands that have funny names today. I’m thinking here of the Goo-Goo Dolls, Limp Bizkit, the Foo Fighters, Chumbawamba and Toad the Wet Sprocket, none of which would ever have performed on ‘The Donn Tibbetts Show.”’

Here is some context.

In case you weren’t around in 1954, Ike was in the White House and television was in its infancy. At 24, so was Manchester’s Donn Tibbetts, but in spite of his tender years, he had already compiled a formidable resume on the local radio station, WMUR. National magazines like ”Billboard,” ”Variety” and ”Cosmopolitan” ranked the Queen City sensation among the top 20 disc jockeys in the country.

Then, when the owners of WMUR radio got a television license, that made Donn’s move to TV a foregone conclusion. But in what format? How about a pre-MTV vee-jay?

”Since I’d been a disc jockey on the radio for a long time, the trick was to play music, but make it something that would work visually,” he said. ”That was the toughest thing.”

The how? Here’s the Boston Herald’s take.

”While a record is playing, one of several things happened,” the paper wrote. ”A chap did a drawing about the record, associated film clips were shown or a gal appeared and more or less mouthed the words.” 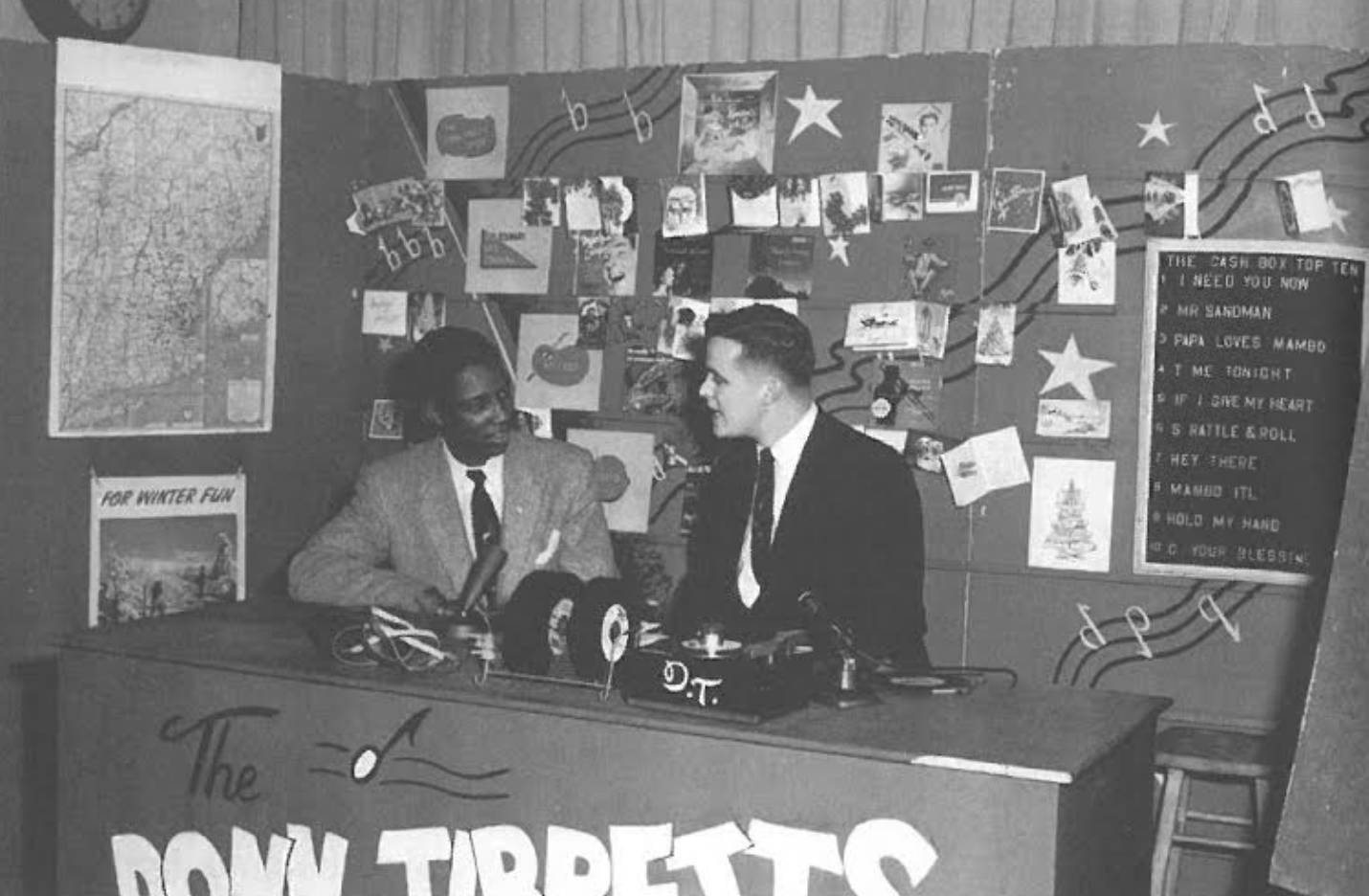 Sounds like Milli Vanilli meets MTV, but Donn assembled a repertory company with a lot more talent than MTV originals like Alan Hunter, J.J. Jackson or Daisy Fuentes. His artist was Jeff Cuddy (whose bread and butter was inking Archie comic strips) and his stable of performers included locals Bert Houle, Leo Gilmartin and Jay Stewart.

Along with a teenaged studio audience and two mammoth cameras, they were all crammed into a secondary studio in the tiny garage behind WMUR’s Elm Street headquarters, where their combined talents – when pooled with in-studio musical guests like The Four Lads, Patti Page, The Four Aces and Bill Haley and the Comets – signaled the start of something big.

Within a month, imitators were everywhere.

”New England’s first television disc jockey, Donn Tibbetts of WMUR-TV in Manchester apparently has started something,” the Herald reported, ”because Stan Richards is slated to become Boston’s first video DJ when he starts his own show on WBZ-TV next month.”

Meanwhile, down in Philadelphia, teenagers were digging a guy named Bob Horn on WFIL-TV, but it wasn’t until Horn got bagged for DWI – oops, when the station was in the midst of an educational campaign about drunk driving – that Dick Clark made his American Bandstand debut on July 9, 1956.

If you don’t believe me, check out my friend Ed Brouder’s exhaustive study of the New Hampshire broadcast industry entitled ”Granite and Ether.” Our very own Donn Tibbetts was Dick Clark before Dick Clark was invented, which is not to say that Donn – who was New Hampshire’s premier radio newsman before becoming State House correspondent for The Union Leader – was ever aiming for a spot in the Rock ‘n’ Roll Hall of Fame.

”Back then, you only had time to play five songs,” he told me some years ago, ”and all the record companies had what they called ‘song pluggers.’ They’d try to get you to play their records, but the best way to know what to play was to listen to the request shows and hear what the kids wanted to hear.”

Before his passing in 1998, Donn was still in tune with kids. Mostly his own. He and his wife (Jane Savage Tibbetts) had four of their own, not to mention seven grandchildren and two great-grandchildren.

This story came back to me last week when I was listening Manchester Public Radio’s highly addictive “The Morning Show” with Peter White and the Moose, the Moose being verbal savant Joel Elber. Somehow, a heated conversation about the absurdity of “Dancing with the Stars” shifted to “American Bandstand” and Dick Clark.

As previously stated, Donn Tibbetts was Dick Clark before Dick Clark was invented, and since two of Donn’s kids are regular listeners to “The Morning Show” – those kids being Gary and Donn T. Tibbetts – I thought it might be nice to look back on their father’s legacy.

⇒ Catch up on the complete Millyard Musings archives here.