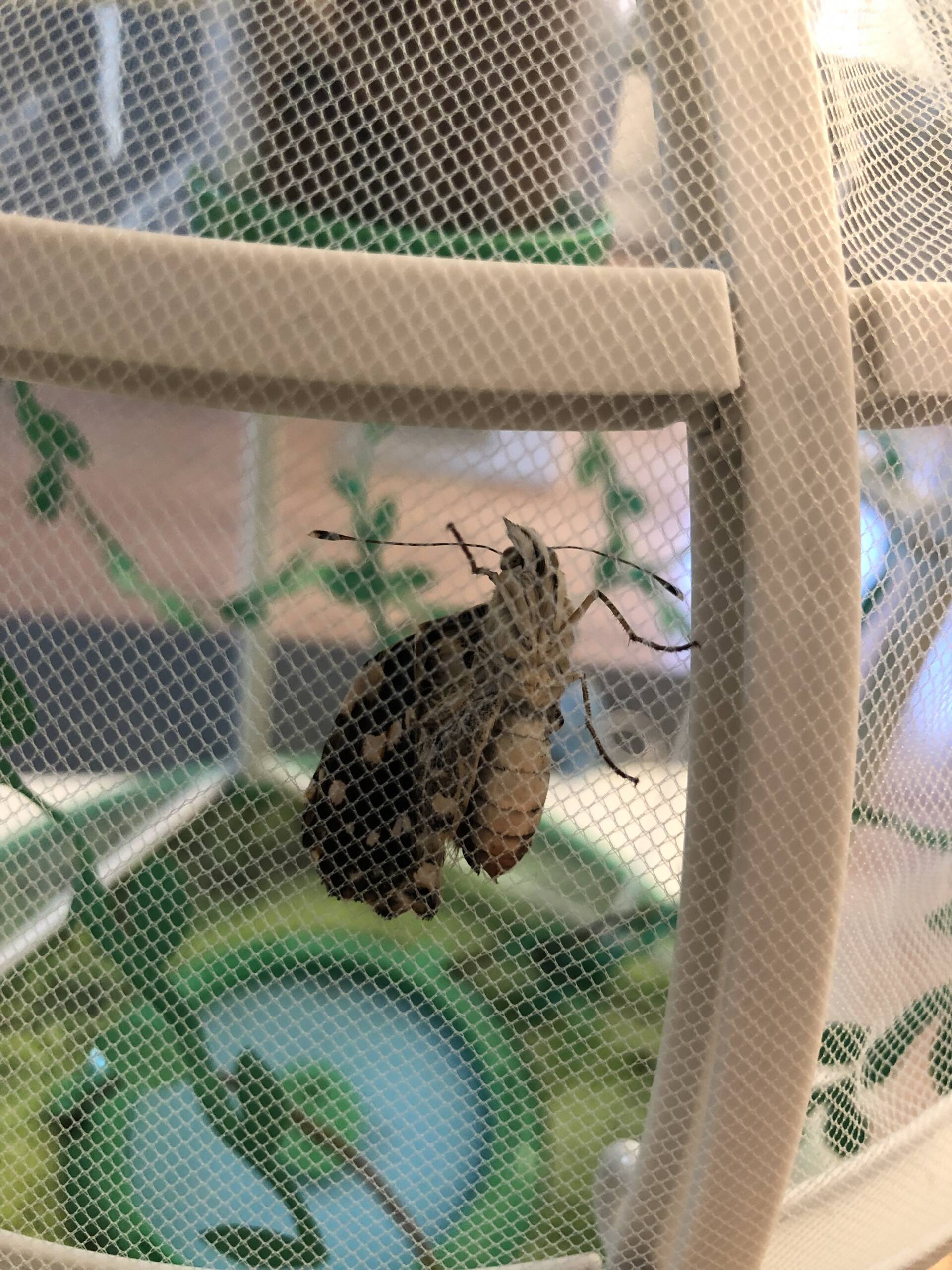 There’s something wrong with Buddy.

For the past couple weeks, my daughter has nurtured a pair of Painted Lady butterflies, the larvae arriving in the mail along with a cup of some sort of sweet peanut butter-like paste. We connected the cup and paste to the top of a netted cage, placed them in a warm area of the living room, worked hard to keep the cats from using them as a midnight snack, and waited.

A few words about Little Bean’s relationship with insects. Besides the curious exceptions of ants and flies, she loves them. All of them. She has come to me with a shiny, black stag beetle’s pincers attached to her pinky. She has allowed a colony of daddy long legs to swarm over her hands dipping her fingers into the nest like a baptismal font of creepy crawlies. She has chased moths and butterflies. And once, while dip-netting for minnows, she squealed in delight when the net came up filled with water skimmers.

Raising a caterpillar into a butterfly was an obvious and enjoyable experiment.

But something had gone wrong.

Buddy the butterfly showed up overnight, so we never saw his emergence from his pupa. But we carefully unscrewed the bottom of the jar (making sure the second caterpillar was undisturbed) and released our new butterfly into his temporary cage. The cage itself was netting, with little plastic branches, twigs and leaves for him to settle onto as he tested his brand-new butterfly form.

It was clear, though, that Buddy’s wing was ill-formed, curled up nearly over his head. He crawled fine. But there’d be no fluttering for Buddy.

Buddy was a butterfly that could not fly.

I recalled an essay I read a while back by psychologist David Walsh about empathy in children where he suggests that empathy can’t be a lesson. In other words, you can’t teach it directly.

“We can’t sit our children down for formal lessons in empathy,” he writes. “Instead, empathetic responses emerge over time in the context of caring relationships, modeling, storytelling, communication, playing, emotion coaching and a whole lot of patience.”

And while I didn’t ever expect raising a butterfly would become a life lesson, well, here we were.

We sat at our kitchen table that evening over milk and coffee and considered our options.

“Buddy is not going to survive long outside, baby, without being able to fly,” I began. Our original goal, of course, was to birth him and then set him free in our flower garden outside.

“Can we take him to one of those animal hospitals,” Little Bean immediately suggests, “like one of those butterfly zoos.”

I love her more than I’m able to put into words that her first thought is to fix him. I explain that there’s no hospital for butterflies, that even if we sent him to a sanctuary, they would have the same problem we have.

“I feel like we have two choices,” I tell her. “We can let him go outside among the flowers where he’ll be free but his life will be very short. Or we can try to give him the best life we can here, inside, but that would require a lot of attention.”

She pauses for a long time, her face wrinkling in thought. This is life and death stuff, big picture decisions in the microcosm of an insect’s world; a split second of life being decided by a 6-year-old against the backdrop of all time, and all the universe.

Without a word, she climbs down off the chair and goes to find her mother, and for a moment I feel hurt that she decided not to confer with me, but she clarifies after a moment.

“Momma said we could use her black-eyed susans,” my daughter says.

I had never even considered a third option. So, my daughter and I walk out to the garden, and snip off the head of a small, yellow flower, bursting with pollen. Then, we make a mixture of sugar water in a small cap. Finally, I chop up a tiny bit of watermelon because I read Painted Ladies like fruit.

We carefully slip this new eco-system under the mesh of the cage.

“How long can he live there, daddy,” she asks.

“I don’t know baby. But even if it’s a short time, we’re going to give him the best life we can.”

Later that night, before bed, we check on Buddy and discover that he has indeed found the sugar water. He’s perched on the side of the cap, one wing open, one curled.

As you read this, we are now several weeks into Buddy’s life. Sadly, the second caterpillar did not make it out of his pupa state, leaving Buddy as the sole resident of his mesh cage. We change his water each day, and bring him a new fresh flower now and again. He’s still unable to fly, but some days we find him on the mesh nearest our living room window, soaking in the sun.

Is his life better than it would have been had we let him go out into the flower bed? I don’t know. I don’t even know how to scale a question like that. Buddy is just an insect. But he’s a living creature, and there’s value in considering what that life even means.

Maybe the difference won’t be felt by Buddy. Maybe it will be felt by my daughter instead. Or, maybe I’ll be the recipient of a lesson in patience. His life is too little to gauge, and our world is too big.

But we’ll go on picking flowers for him, and he’ll keep on flapping that one good wing and you never know when kindness and empathy and compassion will sink in – will really latch on to a kid’s heart – so you may as well just keep trying because that effort has no cost.

In the end, a one-winged butterfly living in your house for a month is a small price to pay for that chance. Who knows? Everybody likes a flower.