As the restaurant industry continues to push forward amid constant setbacks, some chefs are using this tumultuous time to explore new avenues beyond restaurant life. 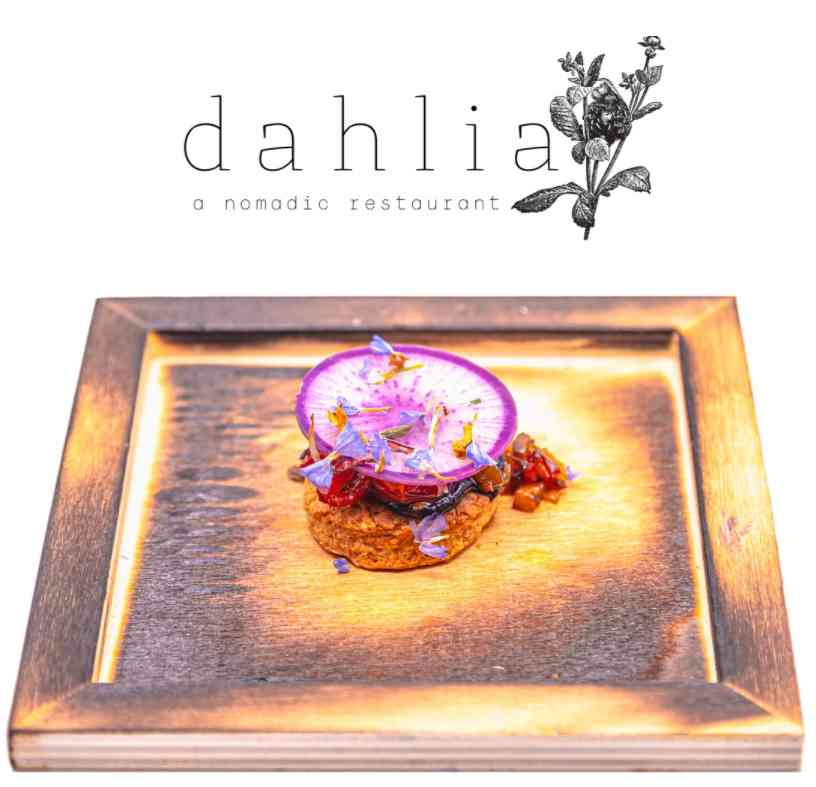 Culinary power couple Matt Berry and Lauren Foster Berry previously worked at Greenleaf, a farm to table restaurant in Milford, where Berry served as chef de cuisine and Foster Berry as pastry chef. Uncertain of the future of traditional restaurant dining as COVID-19 concerns mounted, the duo decided to carve a new path for themselves.

This led to the creation of Dahlia, a pop-up dinner concept emphasizing seasonality and sourcing from local purveyors across the Granite State.

“During quarantine, before we went back to work, we were trying to think about what we wanted our next move to be,” said Foster Berry. “This is such a transitional period for the industry. We were unsure of how the restaurant industry would recover.”

Dahlia, which is named after the couple’s 5-month-old daughter, organizes farm-focused dinners, each held at a different venue and following a different theme. Berry and Foster Berry were inspired by the relationships they’ve developed with farmers and NH businesses over the years and the desire to support them during this challenging time.

Many of the events take place at New Hampshire eateries that harbor the same beliefs that form the values of Dahlia. These include The Birch on Elm, Noodz (both in Manchester) and Exeter’s Otis. A core value among these establishments is gaining an understanding of where our food comes from and treating locally-sourced products with respect.

“The farm-to-table [concept] is so prevalent in this area right now. It can kind of turn into a buzzword…we know the farmers care, we care and we want to share that experience with you,” said Foster Berry.

Attending a Dahlia event is a whole experience that differentiates from eating a meal at a traditional brick-and-mortar restaurant. Guests are presented with a menu that is intentionally minimalist; each item is described as a list of ingredients, with no indication of how they’re prepared

The mystery surrounding the menu is unveiled one course at a time. Guests eat as a community, with everyone receiving each course together. The artful plates are then described in intricate detail by the culinary team, from the farms the products came from to the preparation of each component.

“Most of the people that are coming are really passionate about food. And want to know the thought process of each dish,” said Foster Berry.

The first two events featured dishes inspired by the autumn equinox, with vastly different menus for each event. The culinary team behind Dahlia enjoy pushing the envelope to craft thoughtful, technique-oriented plates, many of which offer modern variations on classics.

A personal favorite of Berry was the Venison Tortellini from their second dinner at The Birch on Elm. The course consisted of sourdough tortellini filled with venison-mushroom sausage with radish in a shallow bowl of venison bone broth.

Another highlight from this dinner for Berry was the rather experimental birch bark biscuit intermezzo, made from the inner bark of New Hampshire birch trees.

“Matt read about the fact that you can slice the tender bark really thin and use it in soups and stews and it would get noodle-y, but it did not do that,” said Foster Berry.

“We dried it instead, then we milled it into flour, and we made biscuits with it and they were so good,” said Berry.

Dessert at Dahlia is no less adventurous and captivating than the courses that precede it. Foster-Berry’s experience as a pastry chef shines through in sweets such as golden milk panna cotta with chai shortbread, turmeric-squash puree and honey meringue.

Craft cocktails are available, and at the end of the meal, the team provides guests with a wax-sealed envelope containing detailed descriptions of the courses along with all the local products used in the meal.

Upcoming Dahlia events include a sold-out “knifemaker’s dinner” Nov. 15 featuring Zac Camacho, a NH-based knife maker and owner of Camacho Knives and Leather, at Birch on Elm. The event will include handmade knife displays and a raffle.

Dahlia is also to hold a plant-based dinner at Dunk’s Mushroom’s in Brentwood, with an emphasis on hearty winter produce and locally-foraged mushrooms.

The concept surrounding Dahlia not only benefits foodies in the community, many of which are in search for socially-distanced ways to connect with one another, but also for the many farmers and artisans who are in need of a place to highlight their products.

“We found it to be an outlet for so many of our close, talented friends; and not just in food, but in art, photography and music,” said Berry.

A meal from Dahlia enables guests to experience genuine farm to table dining with a no holds barred approach to seasonality and creativity.

Visit https://www.dahlianomadic.com/ for additional information regarding upcoming events and to buy tickets.