MANCHESTER, NH – A district elementary school teacher has filed a complaint with the city against an alderman, citing violation of the city charter’s Standards of Conduct clause.

Janet Beauparlant submitted a letter on April 23 to the Mayor and Board of Aldermen describing a situation that unfolded on Facebook March 10, and ended with her first disciplinary letter in 34 years of teaching.

She feels Alderman Joe Kelly Levasseur overstepped his position as alderman by going to her superiors and reporting her social media post.

Beauparlant, who is a math tutor in addition to her job for the district at Weston Elementary School, posted on her personal Facebook page a photograph of a tattered  math book, which her client brought to a tutoring session. Beauparlant said she decided to post the photograph out of frustration, after talking with her client’s mother about the condition of the book. The mother told Beauparlant that was not the only book her child was issued in such poor condition. With the parent’s permission, Beauparlant posted a photo of the book.

“My whole reasoning behind posting the photo is that our students in Manchester deserve better.  They’re being compromised.  What kind of a message are we giving students if we hand them a text-book of curriculum they’re going to be responsible for that school year when it looks like this,” Beauparlant said.

One of those who commented on her Facebook post was  Levasseur. The two have known one another for decades, says Beauparlant. They went through school together.

“We never hung out, but we’ve known each other since we were teenagers. I’ve eaten at his restaurant. I would not have thought he would do something like this,” she said.

Levasseur engaged in a lengthy Facebook thread with Beauparlant and others about her post, he then reposted the photo on his own Facebook page, asking why didn’t Beauparlant just bring the book to the superintendent.

“These posts turn off anyone thinking about putting their kids in our schools. Imagine any private employee posting things like this and keeping their job?” wrote Levasseur, who, the next day, apparently followed through on his promise to personally bring the photo to the attention of Superintendent Dr. Bolgen Vargas.

According to Beauparlant’s letter, Weston school principal Liz MacDonald was called to the district office on March 22, and then returned to the school and called Beauparlant into her office for a one-on-one.

She was issued a disciplinary notice, which also cited a possible violation of the Family Educational Rights and Privacy Act (FERPA) by including in the photo the inside cover of the book, which lists names of students who’d previously used the book.

She said that including the names was inadvertent. She only intended to show the poor condition of the book to reinforce that Manchester should do better for its students.

Now she is asking that Levasseur, who reshared her post on his own Facebook page — including anything that might be considered a FERPA violation — at least be held to the same standard and face disciplinary action.

She also feels he used his position as an alderman to threaten her job, acting outside the board structure, in what felt like a personal attack on her job.

According to the city charter’s “non-interference” statute: “The board of mayor and aldermen, the various boards and commissions and the board of school committee shall act in all matters as a body, and shall not seek individually to influence the official acts of any city official…”

Beauparlant said on Monday that if Levasseur were truly concerned about the negative perception her post might have on the city, his own posts should be of concern.

“Most of what I post is positive — I just posted about one of my students, who won the Water Works science fair,” Beauparlant said. “When I see some of the things he posts, how is it any different, like a picture of a man lying on a city sidewalk with a caption referring to him as a ‘passed out ahole’?”

As for the condition of books used by students in the school district, Beauparlant isn’t the only teacher who has put the books on display. On April 9 a group of teachers came before the Board of School Committee and, in show-and-tell fashion, distributed several text books to board members that were in similar poor condition to the one Beauparlant shared on Facebook.

A group of teachers stood in a row holding enlarged photographs of the dilapidated books to reinforce to school committee members that the district needs to address the unsatisfactory condition of books.

Beauparlant said she feels she has been unfairly singled out by Levasseur for making a valid point. Using a platform like Facebook to share the information is a matter of her right to free speech. She believes Levasseur went too far when he used his position to threaten her livelihood.

The ordeal has left her feeling defeated.

“My ultimate message is that every political decision I make revolves around being the voice for children, that’s how I vote, that’s how I think, that’s how I operate. My testimony to that is that I’m a single mother who had no children of my own, but I fostered four children, and was blessed to adopt two of them,” Beauparlant said.

“My students are an extension of that. They are my children. I feel someone’s got to advocate for children and speak up, their voices need to be heard in some capacity — and that’s all I was trying to do,” Beauparlant said.

Although Levasseur, who is also an attorney, has previously warned Manchester Ink Link not to attempt to contact him for comment under any circumstances, he did reach out on Tuesday in response to this story with the following email comment:

In response to this comment, the InkLink points out that the story never mentioned a “phone call” to Vargas, and was referencing Levasseur’s own comment, of his intention to take the matter to school superintendent Vargas, as written by Levasseur in the Facebook thread: 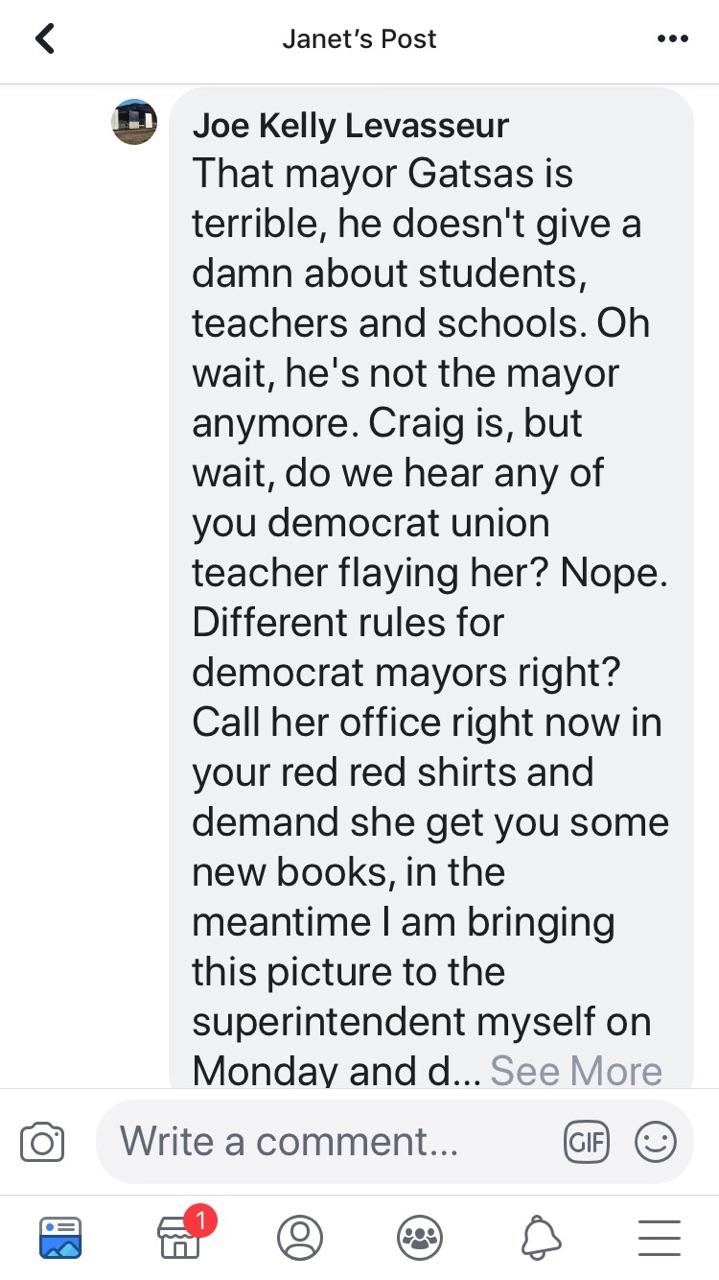 Below, letter on the agenda for the May 7 Board of Aldermen meeting.

Editor’s note: The original version of this story was updated to include an emailed comment from Alderman Levasseur, which was received after publication.