The ‘Point-in-Time’ survey says programs are bringing more people in from the cold but more must be done to solve homelessness. 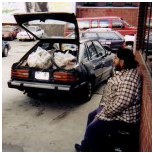 CONCORD, NH –The number of homeless individuals across the state measured 2,158, down 2 percent from 2014 numbers and down 14 percent since 2011 (from 2,520), according to data released today by the Department of Health and Human Services (DHHS). The finding is the result of a one-day Point-in Time (PIT) count conducted in January 2015 by three Continuum of Care organizations.

According to the report, the number of people in shelters increased 9 percent (up to 1,370), while the percentage of those unsheltered decreased 34 percent (262) from the results of the 2014 PIT count.

“Decreasing homelessness in our state suggests that initiatives to prevent homelessness and rapidly rehousing individuals displaced from their homes are working,” said DHHS Commissioner Nicholas Toumpas. “However, our work is far from complete, as there are still far too many who do not have a home. In these times of limited resources, it is more critical than ever that we band together to find solutions to end homelessness.”

The NH DHHS/Bureau of Homeless and Housing Services coordinates this Point-in-Time count in order to gather an accurate and unduplicated count of homeless individuals and families across the State.  As part of the funding BHHS receives from the U.S. Department of Housing and Urban Development, this count is required to identify the needs created by the ongoing issue of homelessness; both sheltered and unsheltered, in New Hampshire.

“The PIT count provides data on the number of people experiencing homelessness on any given day in New Hampshire,” said BHHS Administrator Maureen Ryan.  “The data helps identify trends and areas of need across the State so that we can ensure the most efficient and effective delivery of services to this population.”

This count took place on January 28, 2015 from midnight to 11:59 p.m. and targeted city/town welfare offices, homeless shelters, hospitals, police departments, soup kitchens, food pantries, outreach workers, and other organizations serving homeless people in New Hampshire. The count is undertaken as a coordinated effort between the three local homeless Continuums of Care, Nashua, Manchester and the “balance of the state,” which BHHS coordinates.

If you would like to help the homeless in NH, donate to the NH Food Bank, or contact New Hampshire Coalition to End Homelessness (NHCEH), or non-profit in your area.

RELATED INFORMATION: The NH Coalition to End Homelessness “Hope Starts Here” Scholarship Fund provides financial support to students currently living in NH who have experienced homelessness during their school career, have a desire to continue their education beyond high school, and have demonstrated academic achievement. Application deadline is May 1. Since 2009, the fund has helped underprivileged students achieve their dream of attaining higher education.