Craig’s proclamation extolled the virtues of libraries as “accessible and inclusive places that foster a sense of connection and build community” and for connecting people to education, employment and new ideas.

“I encourage all residents to connect with their library by visiting online or in person to access resources and services,” Craig’s proclamation states.

Meanwhile, the Manchester Public Library is hosting a scavenger hunt at the library to celebrate National Library Week now through April 9. The theme is “connect with your library” and folks who find at least three hats hidden throughout the building atop the head of photos of industrialist Frank Carpenter, whose money built the library 100 years ago, can qualify for a chance to win a $25 Market Basket gift card. The hunt is taking place at the main Carpenter building library on Pine Street and on the West Side at 76 Main St. 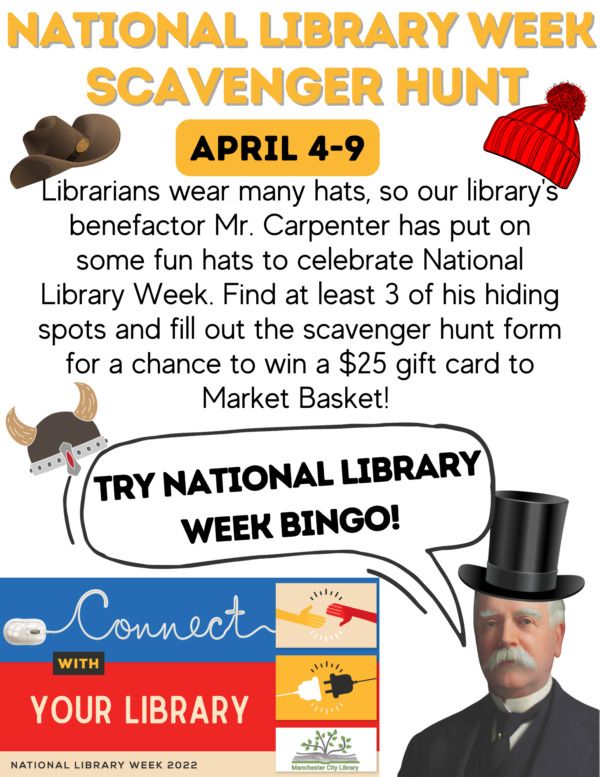 “National Library Week is a time to reflect on the numerous resources that our public library has been able to provide to the Manchester Community over the past 168 years,” said Manchester City Library Director Denise VanZanten. “Services continue to change and adapt, as we had to during the pandemic, and I wish to thank our dedicated colleagues and library users around the state for proving libraries are an integral part of our daily lives. I am very proud of my MCL team’s dedication in all that they do by adapting to provide library services in so many ways and formats not only from our buildings but also on our online platforms or via our bookmobile.”

“Libraries have always adapted. We hear this nonsense that they’re an anachronism and we don’t need them anymore,” York said. “Libraries are still the best way to get information.”

York said libraries are even more important for finding authoritative sources of information today than ever, as widespread misinformation and conspiracy theories have found new purchase through social media platforms and websites.

“Because it’s on the internet people think that it’s an authority, and it’s not,” York said.

One of the ways libraries have adapted in New Hampshire is by offering free digital books through the New Hampshire Downloadable Book Consortium. York said 205 of the state’s libraries participate in that network.

And York said librarians in New Hampshire remain stalwart against the latest wave of voices calling for certain books to be banned from libraries. He said it’s nothing new.

“People have always challenged what goes into a library. ‘I don’t believe that book should be there.’ Well … don’t check it out, don’t read it,” York said. “We’re there to make sure that no matter what your views are, you can find useful, accurate, truthful information in the library. There aren’t many sources that can make that claim.”

New Hampshire has a proud tradition of offering free access to information to its residents through the use of public libraries since as long as the institution has been around.

York said the State Library in Concord, founded in 1717, was the first of its kind in the nation and the first public library in the country was founded in Peterborough in 1833.

In 1849, New Hampshire was the first state to enact legislation to authorize the establishment of public libraries statewide. Today, York said there are 234 public libraries in the state, one for every community.

“Nobody else can make that claim. Not McDonald’s, not 7-Eleven, no Dunkin’ Donuts,” York said. “The libraries are critical to all of those communities.”