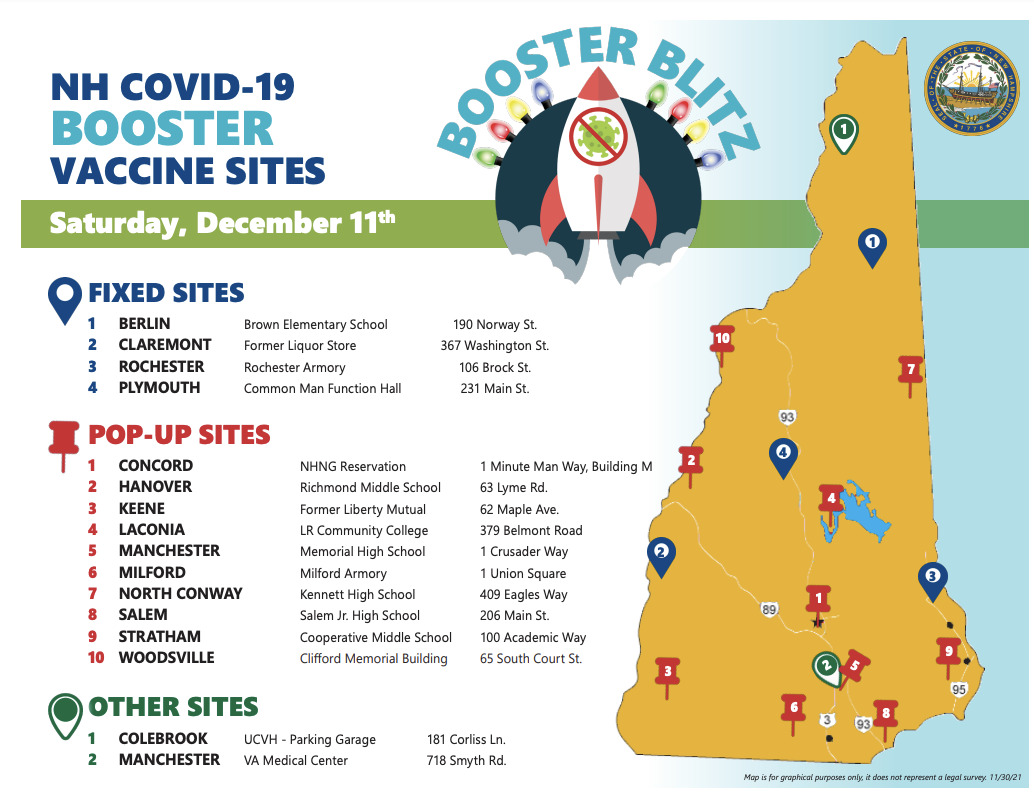 CONCORD, NH – Gov. Chris Sununu reiterated what he said last week regarding actions he is taking relative to the dramatic surge in COVID-19 cases, hospitalizations and deaths.

And critics wonder why his actions don’t directly involve reducing the spread of the virus, but instead expand hospital beds and participation in a federal lawsuit that now allows some healthcare workers to avoid being vaccinated.

“New Hampshire continues to experience the winter surge that we always predicted,” Sununu said at a news conference Tuesday in Concord.

“It’s very serious not just in terms of cases but the number of hospitalizations, the number of fatalities and the number of families this is affecting mostly within the unvaccinated community. But we are also seeing an increase in breakthrough cases as well,” Sununu said.

Sununu said he expects the surge to worsen over the next few weeks.

Over the past two weeks there has been a 43 percent increase in hospitalizations, he said.

The state announced 22 new COVID-19 deaths Tuesday with only one associated with long-term care. Four of them were under age 60.

Sununu said his executive order last week should help hospitals and nursing homes at a time when there is a shortage of health-care workers.

The order allows hospitals to create internal temporary acute care areas within hospitals. There will also be rehabilitation centers to take patients who are waiting to leave a hospital for a long-term care facility.

There will also be strike teams to augment reduced health-care staffing.

This is a big deal, he said, because he has heard from many nursing homes that risk closing if they lose workers who refuse to be vaccinated.

State Sen. Tom Sherman, D-Rye, who is also a physician, has been critical of Sununu’s handling of the surge.

Tuesday’s press conference only confirmed Sherman’s deep concerns created by the announcement of the injunction in the federal lawsuit.

“It is my understanding the nursing homes are working to be fully compliant with the federal order in the best interest of the health of their residents,” Sherman said. “Unfortunately, these decisions and resulting actions will only compound our current surge.”

Sherman called them “a continuation of several months of virtual inaction or delay whether from the Executive Council, the Fiscal Committee or this administration.”

When asked what action Sununu has taken to reduce the spread of the virus, he looked back to the beginning of the pandemic when he was getting needed personal protective gear that was hard to obtain.

“I could go on all day,” Sununu said about the measures he has instituted to mitigate the spread of the virus.

At the press conference, Sununu restated the need for people to get vaccinated and get their booster shots. He said the number of vaccinated people is “trickling up.”

Sununu said he will get his booster shot at the Booster Blitz on Dec. 11. There will be sites across the state and people can sign up online starting Wednesday morning at vaccines.nh.gov.

Sununu said the 900,000 at-home free tests have already been spoken for, which surprised him.

When asked about the frustration parents are feeling looking for a shot for their children, Sununu said the delay is because “Demand is incredibly high.”

Freelance reporter Damien Fisher asked Sununu what he would do to protect women’s reproductive rights if Roe v. Wade is overturned in a case being argued Wednesday before the U.S. Supreme Court.

“The Dobbs case,” Sununu said. “That is not overturning  Roe v. Wade. I’m not really paying attention to the case.”

While Sununu may not be paying attention to it, Planned Parenthood and many reproductive rights advocates are watching it closely.

Kayla Montgomery, VP of Public Affairs, Planned Parenthood New Hampshire Action Fund, said after the news conference: “To be clear – abortion rights are at stake at the Supreme Court. Reproductive health providers, advocates, and Granite Staters are paying attention to this case because we know it will determine the future of abortion access in our country.

“Without Constitutional protections, abortion rights will be decided on a state by state basis,” Montgomery said.

There are clear restrictions on abortions in New Hampshire starting Jan. 1, 2022, that Sununu signed into law.

Access to abortion at or after 24 weeks is banned, with no exceptions for fatal fetal diagnosis, rape, or incest. There is also a mandatory ultrasound provision for all abortion care at all stages of pregnancy.