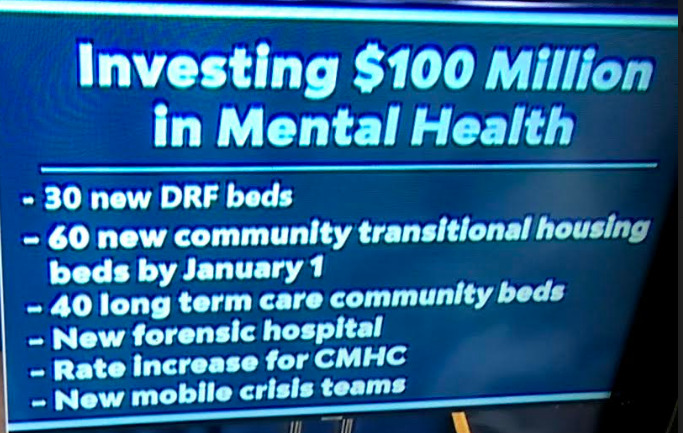 CONCORD, NH – The federal government is clawing back some of the $600 million in CARES Act funds the state distributed to businesses last year, Gov. Chris Sununu announced Thursday at his regular press conference.

Companies that anticipated but did not realize a COVID-19 loss must now return those funds, the Treasury has said, but Sununu said the state is creating a program, approved by the feds, that will allow those businesses to deduct COVID-19 related expenses – from training staff to buying plexiglass barriers – as a way to allow them to keep some or all of that money.

Sununu also declared he is “Pro-Choice” and has not changed his view on abortion, though he noted he supports a measure possibly being inserted in the budget bill which would not allow for abortions in the later months of pregnancy and would make it unlawful for doctors to perform those procedures.

“I haven’t changed my position one bit. I am pro-choice and like many pro-choice citizens, I have always supported common-sense reforms to limit abortions in months seven, eight, and nine. This was not my proposal. it was the legislature’s. But understand that 43 other states, including liberal states like Massachusetts and New York, already have similar provisions. So, you know, this is not anyone claiming some radical restrictions. That is just partisan politics. So 43 other states are already there, you know.”

He also said that he wants Canada to open its borders for tourism and might be willing to give the neighboring provinces New Hampshire’s extra COVID-19 vaccines, if the state has some and if the federal government would allow it.
Sununu also touched upon the state’s mental health crisis, calling the change going on right now “transformative” adding the state could invest as much as $100 million on everything from a new forensic hospital to raises for workers.

He also said there are concerns he sees if the legislature wants to pass legislation requiring a legislative vote 30 days after an emergency declaration.

All this news at the governor’s weekly press conference came with increasingly fewer new and active cases of COVID-19 across the state and declining hospitalizations Thursday.

Dr. Benjamin Chan, the state epidemiologist, said there were 74 new cases of the coronavirus in the state on Thursday, down significantly with the state averaging about 50 to 60 new infections per day. At the height of the pandemic, the state was recording 800 to 900 cases a day.

The active positivity rate is 1.8 percent with hospitalizations at just 26.

However, there was one new death to report of a person who was not in a long-term care setting, leaving the total death toll so far at 1,354.

He said there has been a dramatic drop in community-level transmission.
Still, Chan said the best way to get things back to normal is to get vaccinated and encouraged all people ages 12 and older to become fully vaccinated.

Lori Shibinette, commissioner of the state Health and Human Services Department, gave a brief update indicating there is a new outbreak at Birch Healthcare Center in Rochester involving 18 residents and three staff.

She said the state was closing the outbreak at the federal prison in Berlin and noted one active case remaining at the Sullivan County nursing home.

Shibinette said the state is vaccinating homebound people but will end that at the end of June so she urged people to call 2-1-1 to get an appointment.

Dr. Beth Daly, who heads the infectious disease department, said there have been 1,427,000 doses of the vaccine administered in the state to date, including  805,000 receiving their first dose and 668,000 fully vaccinated.

During discussions earlier this week with the Federal Treasury Department, Sununu said he got definitive word that the government will not allow businesses to keep COVID-19 relief money if they did not experience a projected loss.

The requirement means that the state will have to collect for businesses that received better than anticipated revenues in 2020.

Sununu created the Main Street relief program using some $600 million of the CARES Act funds for two rounds. About a month ago he said it was reported by a media outlet in the state that an unnamed Treasury official had said those funds would be forgiven and while that was welcome news, he had subsequent conversations with federal officials.

Unfortunately, Sununu said, he got the final email this week that the federal government would not allow that. He said it could have a domino effect across the country if the state was allowed to let businesses keep those funds.

What does all that mean?

Sununu said the state is opening up a new fund through the Governor’s Office of Relief and Recovery (GOFERR) to allow businesses to deduct COVID-19 related expenses to offset what they owe.

The Treasury has approved of the program and there will be additional information available at the website https://www.goferr.nh.gov/
.
Reallocations of that funding will go into a couple of other programs, Sununu said, including the Live Venue Assistance Fund where venues can start to apply on June 10, and a Lodging Assistance Fund for another hard-hit industry.

The governor gave an overview of some of the work being done behind the scenes to deal with the state’s mental health crisis in emergency rooms where patients are waiting for a bed and an evaluation which is taking too long.

He said the state is working to bring in more private mental health providers, eliminating barriers to that service, and said the state has come into compliance with the court order that requires a hearing within a set period of time.

He said there are now 30 new beds at designated receiving facilities across the state, 60 new community transitional housing beds by Jan. 1, 40 long-term care community beds opening up, a new forensic hospital to be built, rate increase for mental health workers, and new mobile crisis teams to help those in a mental health care crisis.

In all, Sununu said it could be as much as $100 million spent in the next few years.

About $150 million in federal American Rescue Plan funds will be distributed through the legislative fiscal committee in the next few weeks, Sununu said, including $13 million in mental health investment, $25 million in deferred HVAC maintenance projects, $22 million for state parks,$50 million in water infrastructure projects, $30 million in critical IT modernization projects and $2.5 million for engineering technology renovations at Nashua Community College.

Sununu said it is interesting that the feds have highlighted state park improvements and for New Hampshire “that’s a huge opportunity” to invest in tourism-related infrastructure.

Asked if Canada should open its borders, Sununu said “absolutely” though noting that the country is behind the U.S. in vaccination rates.

He said he has met with his counterparts in the regional Provinces of Canada and they all agree the borders must open as soon as possible.
The stumbling point is vaccine distribution is much slower in Canada.
“I would be willing to give them some of ours,” Sununu said, noting the state is getting to a point where it has more vaccines than willing arms.

He said he would be talking with Washington to see if he could do this and thereby eliminate the risk of potential vaccine waste.

“The border has to be open, absolutely,” he said.

House Bill 417, which passed both the Senate and the House by a margin of 328-41, would require a vote from both the House and Senate to extend any governor’s declaration of emergency beyond 30 days.
The governor might not be able to override a veto of this measure.

Sununu has updated his emergency declaration more than 20 times and this continues to give him and the state access to federal relief funds and other measures that allow him to have executive powers.

He was asked what might be the unintended consequences or impacts to a future governor and what lessons he has learned or advice he would give to the next chief executive in a state of such an emergency.

Sununu said he had not thought about what advice he might give right now and is not yet in the reflective mode, but he said one problem might be if the legislature is no longer in session and what that might do.