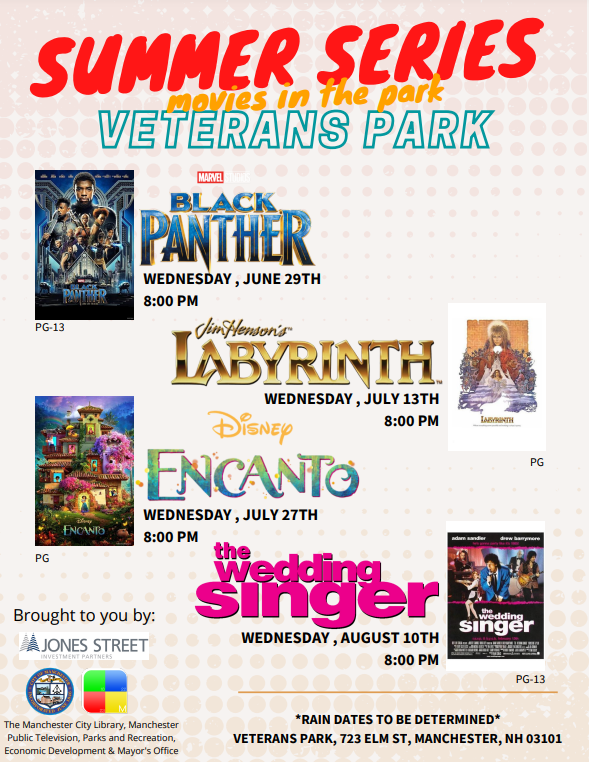 MANCHESTER, NH  – Additional summer programming at Veterans Park through the city has been announced. In addition to Movies in the Park announced earlier this week Manchester Parks and Recreation will host a Concerts in the Park Summer Series.

All events are sponsored by the City of Manchester. Bring your own blanket or chairs. Food trucks will be available for purchases at the concerts, or arrive early and dinner at one of our numerous downtown restaurants!

Schedule for Veterans Park this summer:

More information about the concert series below

Wednesday, June 22 at 6:30 p.m. – New Hampshire’s Artist Laureate Theophilus Nii Martey will be the perfect lead-in for the movies and summer events ahead in Veterans Park!

Theo Martey founded the Akwaaba Drum and Dance Ensemble who will join him onstage in Veterans Park June 22 at 6:30 p.m.   The stage will come alive with West African drumming and dance featuring rich and subtle rhythmic patterns and styles specific to different tribal groups of West Africa.

Martey started his drumming and dance studies at the age of 6 in Ghana, West Africa and now resides in Manchester.  He is a talented artist, songwriter, recording artist, producer and teaching artist.  He received the 2019 Governor’s Arts Award for Arts Education, and was featured on New Hampshire Magazine Who’s It for 2019 list.  He was recently appointed by the Governor and the Executive Council to maintain the honorary position as New Hampshire’s Artist Laureate from April 2022 to February 2024.

Please join us as we celebrate NH Artist Laureate Theophilus Nii Martey and the Akwaaba Drum and Dance Ensemble in Veterans Park on June 22! 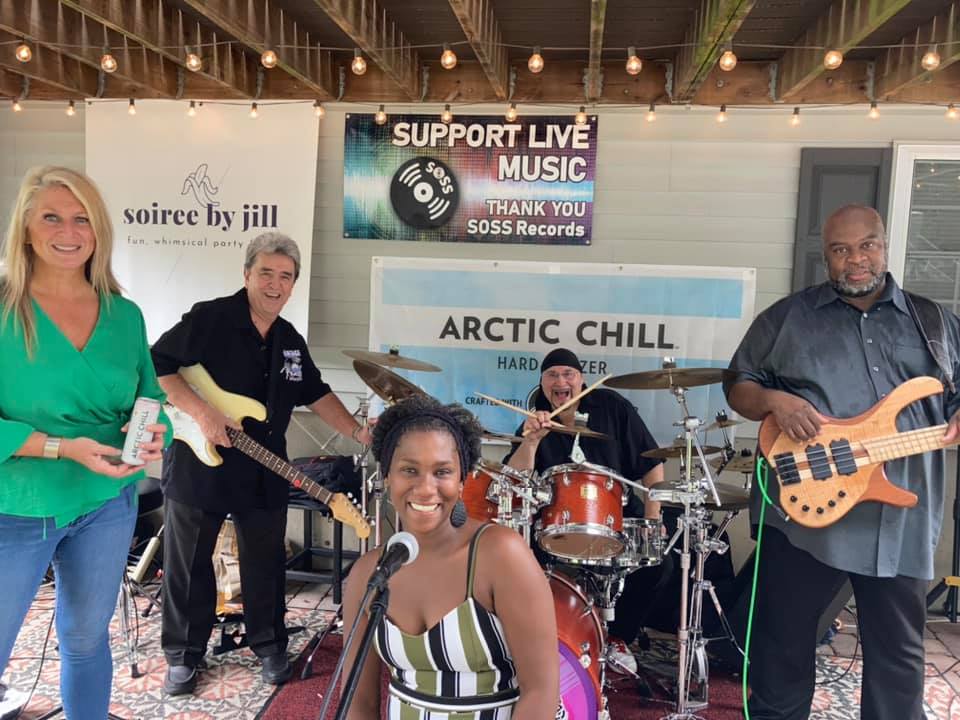 Wednesday, July 20 at 6:30 p.m. – Mica’s Groove Train brings New England’s hottest funky soul band to the stage in Manchester.  Lead by Yamica Peterson,  the band’s style has created quite a buzz in the music industry.  Strong will and determination pushed Mica’s Groove Train forward, but raw talent has kept these musicians strong, relevant and alive! 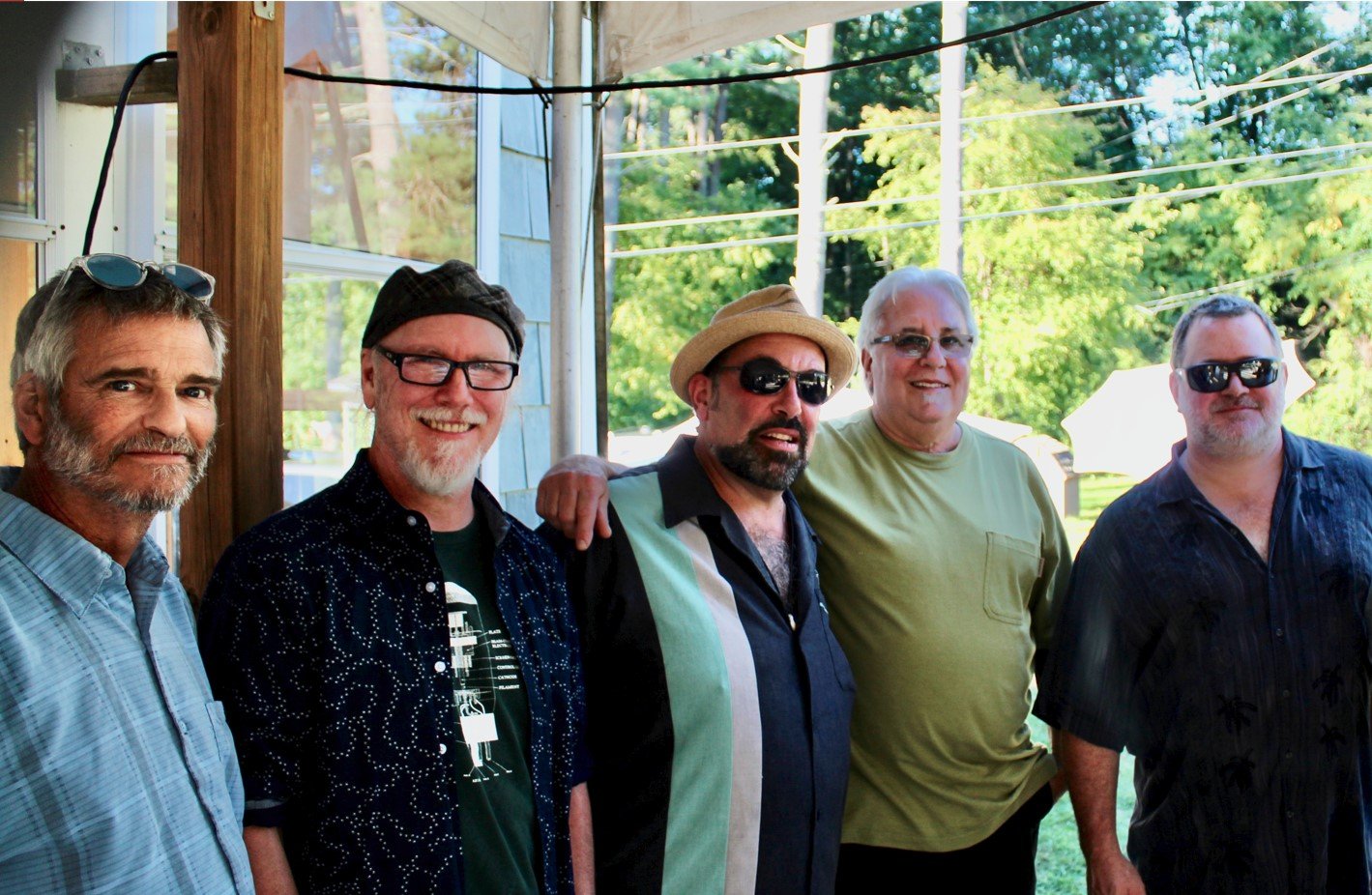 Wednesday, August 3 at 6:30 p.m. – Truffle, a premier band from Seacoast NH, comes to the Queen City to entertain for the evening.  Their music style is hard to describe, though their fans love their original music, as well as the cover tunes they add for a little more flavor.  They’ve been making music on their wild ride together for over 35 years.  Truffle has shared the stage with numerous well-known greats like The Steve Miller Band, The Dave Matthews Band, Phish and many more. Don’t miss the excitement Truffle brings with them!

Wednesday, August 17 at 6:30 p.m. – The band Soggy Po’ Boys was born on a snowy Fat Tuesday night in 2012 and they’ve been honing their craft ever since.  Soggy Po’ Boys will join us on the Veterans Park stage on August 17.  The New Orleans flavored septet play at nearly a hundred shows each year, including festivals, concerts and parades.  They describe their jazz as messy, mixing brass-fueled mayhem with spirituals, Meters-style old-school funk, and the Caribbean side of the New Orleans tradition.  You have to experience the sounds of Soggy Po Boys for yourself! 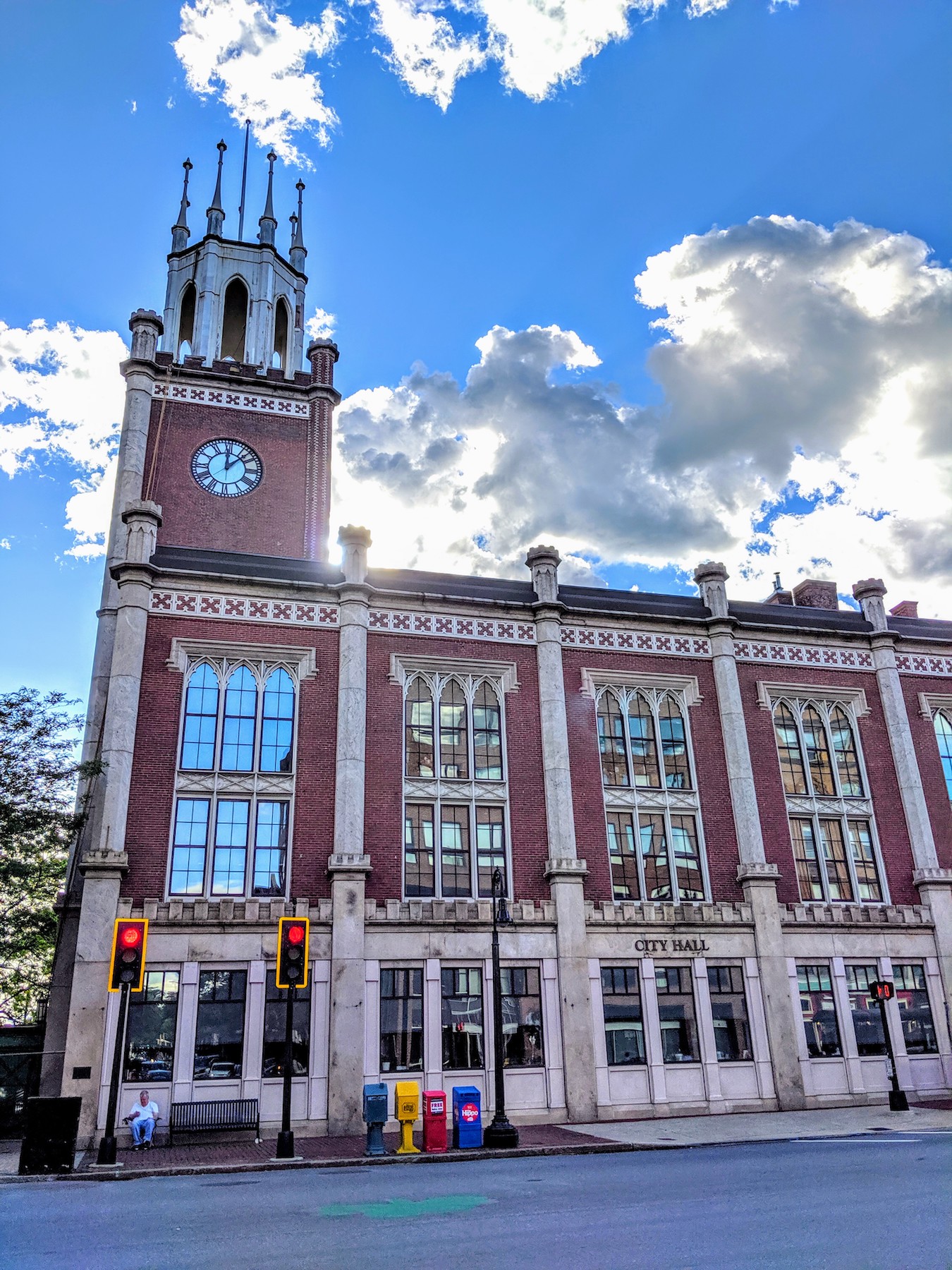