MANCHESTER, NH – In a spirit of accomplishment, recognition and celebration, students enrolled in the West High School English Learners program were honored June 1 with a brief ceremony and lots of cake. Students assembled in the second-floor auditorium and were joined by family members. Each student’s name was called and certificates were presented to outstanding students by their teachers. 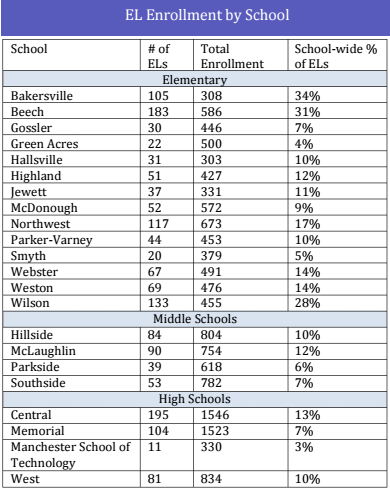 School Superintendent Bolgen Vargas urged the students to remember one thing in particular that has contributed to their success, whether it was advice from a teacher, or relationships forged with peers – or even just that good feeling you get for completing work on time.

“There are many lessons to be learned, but take the most special one, especially you seniors – think about it in the next 10 days or so that you have left–  and always remember if you have the courage to succeed, you always will, because the steps to success begin with you. Congratulations,” Vargas said.

West Principal Richard Dishard thanked all the parents and family members for joining the celebration, and took the opportunity to make a confession.

“I want everyone in the audience to know I’m very, very jealous, because you have a skill I don’t have. I only know one language; many of you know at least two or more, and in our world today, that’s an unbelievable asset to have as you go through life, to be able to communicate means everything in this world,” Dishard said.

“You should all give yourselves a hand,” Kirwan said, before handing out certificates to the group.

You can find more comprehensive data about the district’s English Learners program here.

FACT: The district’s English Learners represent 76 different countries and bring with them the multilingual assets of 62 different macro languages.The top 10 languages spoken in the Manchester district are: 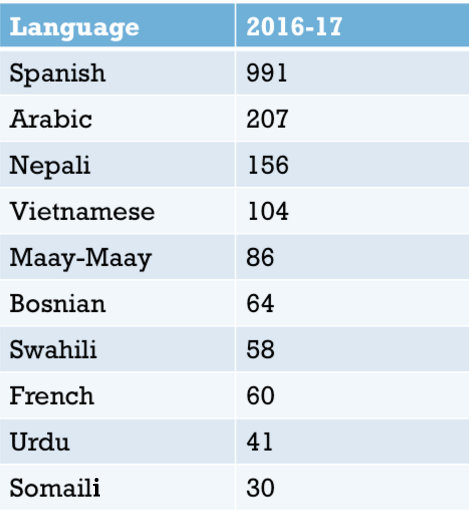 FACT: According to the most recent survey of students, 80 percent of English learners speak one of the top three languages. Newcomers (students who have arrived during the last year) come to the district from the following countries:

Below are the students who received special honors during the EL ceremony:

A student can receive “High Honors” for exceptional grades. Requirements: A student must be taking at least 5 classes; must not fail (or get an F) in any classes; must maintain a Grade Point Average (GPA) GPA of 3.5-3.8499 . This means, the student received mostly A’s and B’s in all classes.

A student can receive “Honors” for strong grades: Requirements: A student must be taking at least 5 classes;  must not fail (or get an F) in any classes; must maintain a Grade Point Average (GPA) GPA of 3.0-3.499.

Students who qualify for Tier C have the highest English language proficiency in the EL Program. They demonstrate academic rigor in all subject matters: English, Math, Science and Social Studies. This year 47 percent of EL students qualified for the highest tier (Tier C).

As of Oct. 2016 the following languages were spoken by 2,120 students enrolled in the Manchester School District: