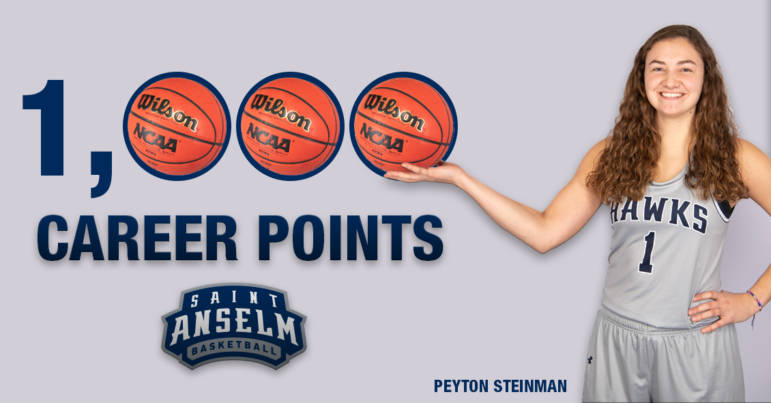 Steinman finished the game with 24 points and 13 rebounds with fellow 1,000 club member Shannon Ryan (Plattsburgh, N.Y.) adding 13 points and 15 rebounds. Ryan is now third all-time in program history in rebounding with 975 during her four years on the Hilltop.

Trailing by three early in the first quarter, the Hawks forged ahead with a 28-6 scoring run that put Saint Anselm ahead, 33-14, with 6:12 to go in the first half. The hosts opened up a 40-23 lead at the break, fueled by 13-point performances from Steinman and Ryan. As a team, the Hawks picked up 31 of the game’s 43 first-half rebound opportunities.

Saint Anselm has won nine consecutive games at home dating back to last season, improving to 15-4 overall on the year and to 11-2 versus Northeast-10 Conference opponents. The Hawks continue to hold first place in the Northeast Division ahead of second place Stonehill and Bentley (10-3).

Saint Anselm returns to action Wednesday, Feb. 5 for a 5:30 p.m. showdown at Assumption.

The Hawks also defeated Southern Connecticut University on the men’s side thanks in large part to Northeast-10 Player of the Week Chris Paul.

Freshman Matt Relihan (Lynnfield, Mass.) also added 18 points off the bench, including three scores from beyond the arc in the second half to help the Hawks pull away.

Saint Anselm improves to 12-8 overall on the year and finds itself tied with Bentley for second place in the Northeast Division of the Northeast-10 Conference with an 8-5 league record. Southern Connecticut State falls to 11-8 on the year and to 7-6 versus the conference.

Saint Anselm returns to action this Wednesday, Feb. 5, taking on Assumption at 7:30 p.m. on the road.

The Hawks dropped a pair of games to Saint Michael’s College over the weekend, both of them by a 5-4 score.

In both games, Saint Anselm got out to a two-goal lead before their penalty kill failed them.

On Saturday, the Purple Knights recorded four power play goals and added another two on Sunday.