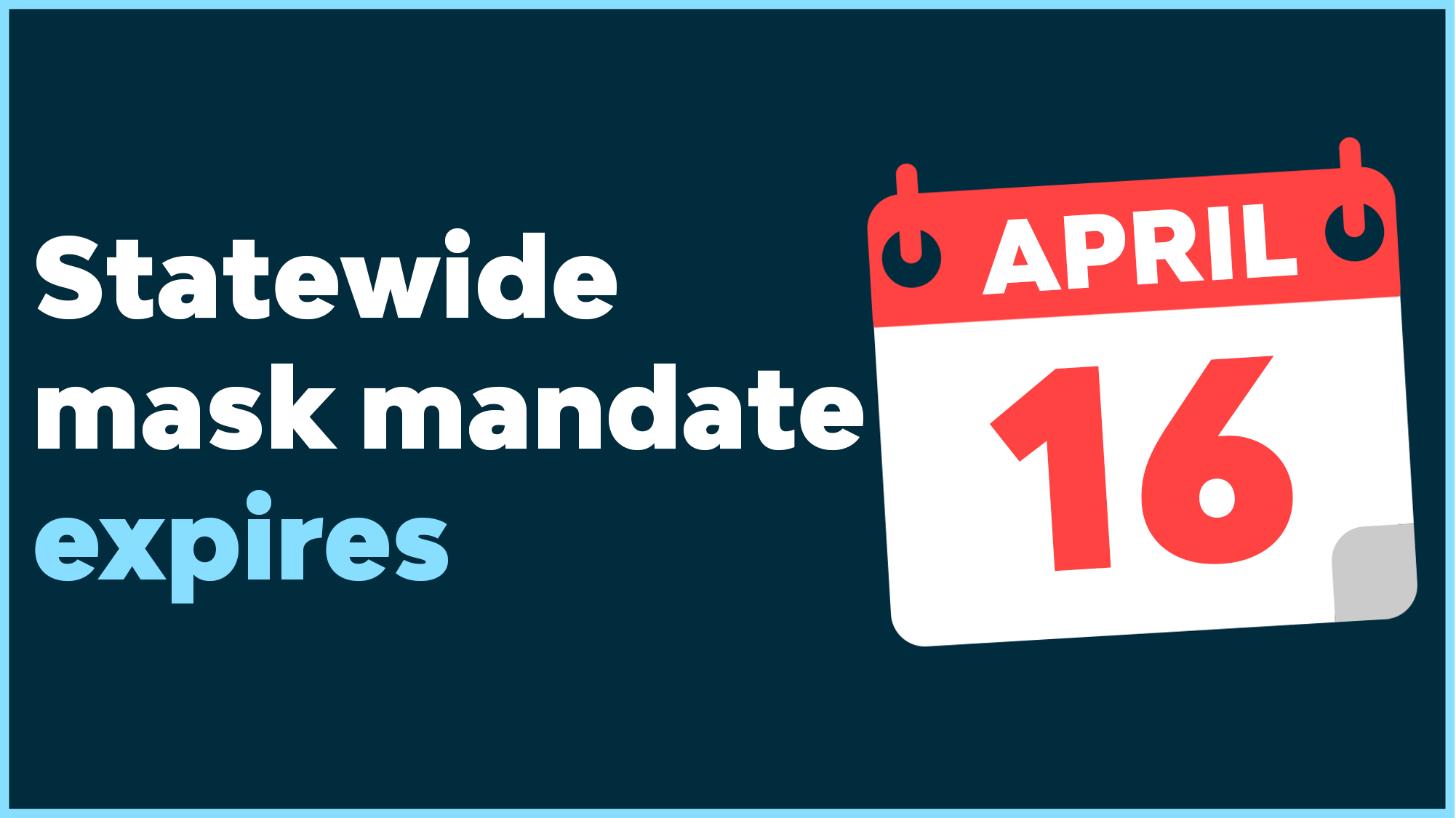 Gov. Chris Sununu said on Thursday he feels comfortable letting the temporary “thou shalt must” mandate expire on April 16 given the fact that 70 percent of residents have signed up to get a vaccine, the daily death toll has come down dramatically and hospitals have the capacity to handle more patients with adequate staffing and supplies compared to November when he imposed the executive order.

He said on May 7, the state will move away from its individual business and industry guidance to universal best practices which will be in place to help slow the spread of the virus.

A state of emergency will likely exist in New Hampshire through the end of the year to accept and expend federal relief funds, Sununu said.

Dr. Beth Daly, head of the state Bureau of Infectious Diseases and Control, said as of Thursday, the state reported 552 new cases, many of whom are younger residents compared to earlier in the pandemic, with a total of 90,525 having been infected since last March.

The current hospital census is 130 with the virus, she said.

The state also reported three more deaths Thursday and none were associated with long-term care facilities. All three deaths were among people who were age 60 and over.

Lori Shibinette, the commissioner of the state Department of Health and Human Services, announced the closure of two COVID-19 outbreaks, at the Alpine Health Center and at the Northern New Hampshire Correctional Facility in Berlin.

One new outbreak was added at the federal correctional facility in Berlin with 85 inmates and two staff sick with COVID-19. That leaves a total of three outbreaks in the state including the Coos County Nursing Home and Rockingham County House of Correction.

Daly said 885,000 doses of vaccine have been administered with 587,000 having received their first dose or 43 percent of all eligible citizens age 16 and up. About 25 percent of the state is fully vaccinated now. This percentage is among the highest levels in the nation.

Daly said the state is halting the administration of the Johnson & Johnson single-dose vaccine while the CDC ensures that it is safe. While almost 7 million have received the vaccine, there have been six cases of a very rare but severe blood clotting problem in those who have had the vaccine.

Daly said 10,000 doses of the Johnson & Johnson vaccine are in the state but on hold until the pause is lifted by the CDC. Sununu said those who had appointments for that shot are being rescheduled to get another vaccine as soon as possible.

Sununu received the J & J vaccine Saturday at a mass vaccination site at the New Hampshire International Speedway. He said he was a little sore the next morning after receiving it the next day and learned about the CDC’s decision by reading the news. He criticized the Biden Administration for a lack of communication on that subject.

“I was very fortunate,” Sununu said in receiving the vaccine and having no serious side effects, surmising that it was “all that adrenaline pumping through,” which prevented him from becoming more sick.

Daly said the state is keeping communication open with healthcare providers across the state to recognize and report concerns from the J & J vaccine and those who received it.

She said severe symptoms related to the blood clots reportedly include severe headache, abdominal pain, and shortness of breath. However, she noted, headache is a normal side effect of all the vaccines.

As of Monday, the state will open vaccine appointments to all people, regardless of residency. There are still 120,000 available appointments now on the state’s vaccine website VINI https://www.vaccines.nh.gov/.

Out-of-state residents will use the site to sign up for vaccines and all they need is to show identification when they come for their appointment.
Sununu urged residents to sign up before Monday to get the “first shot to get a shot,” before the doors open to all.

The governor said Monday will also be a big day as the state returns to in-school classes five days a week after more than a year. He announced weeks ago that he would require them to return and that remote learning would no longer be included in the 180-day school requirement without an approved waiver.

He said six school districts have received waivers from the Department of Education due largely to limits on staffing, including Manchester, which will resume in-school classes as of May 3.

Sununu said, “It is the right thing to do,” to get children into the classrooms, adding it is safe from a health perspective and it is best for their social and emotional well-being.

He said students and teachers have done “a phenomenal job” in learning from home and online and he was very happy to see the students returning to class.

Factors that Sununu said led to his decision to let the mask mandate sunset include the declining rate of fatalities and the increase of vaccinations. In late December and January, the state had 12 average deaths a day. Today, the state is averaging about one fatality, making that a 95 percent drop.

Hospitalization rates are not dropping, he conceded, but the state doesn’t have the concerns it had in early winter about lack of available beds, supplies, and staff.

The vaccination rate is also a huge variable the state did not foresee back in December, Sununu said.
“It’s going super fast,” he said.

As COVID-19 case numbers in New Hampshire were spiking and the winter holiday season was approaching Sununu took to the podium for his weekly COVID-19 press conference and surprised the state by ordering a statewide mask mandate as of Nov. 20.

Executive Order #74, which has been updated numerous times, will now expire at midnight on April 15.

A copy of the order is herehttps://www.governor.nh.gov/sites/g/files/ehbemt336/files/documents/emergency-order-74.pdf

It angered some, including the Freedom Caucus of the state legislature, which grew in size to more than 80 in the next election. The mandate prompted some citizens to picket Sununu’s home and neighborhood.

According to the AARP on April 11, 27 states the District of Columbia and Puerto Rico had mask mandates in place while 12 states had lifted them either by gubernatorial decree, legislative actions or court order.

New Hampshire still has 13 cities and towns with enforced mask mandates, some of which predate the governor’s statewide mandate.

Nashua was the first to enact the ordinance in May 2020 and it was followed by Plymouth, Durham, Keene, Portsmouth, Exeter, Newmarket, Concord, Plainfield, Lebanon, Enfield, Hanover, and Franconia.

Five other communities, including Manchester, have unenforced mask ordinances.

Sununu said those municipalities will still have the right and flexibility to have mask mandates, just as private businesses and schools.
The CDC maintains that mask-wearing has been a “critical tool in the fight against COVID-19” and that when used universally in a community it has been helpful in reducing the spread of the virus.

Social distancing, contact tracing to notify people of potential exposure, washing hands frequently, and in more recent months, getting the vaccination have been other tools that have been helpful.

Sununu said the only thing that is changing Friday is the statewide mask mandate.

Masks are “a good idea when we cannot maintain social distancing,” he said.

The governor has used the analogy of the COVID-19 crisis in the state as a marathon, most notably the Boston Marathon which he once ran.
Asked what mile marker we might be along the 26.2-mile route, Sununu said the state is “On Comm(onwealth) Ave(nue) somewhere.

“It’s still a challenge, still a struggle, but the finish line is in sight. The pandemic is not over and we are not claiming victory on any of this,” Sununu said adding he expects the state to return to almost normal at the end of May.

He expects “we are on track for a safe and successful summer.”