MANCHESTER, NH – With a Democratic legislature and a Republican governor in at an impasse over a $16 billion biennial budget,  health care providers from across the state are saying the health care workforce crisis is deepening with thousands of positions going unfilled statewide.

That shortage is affecting medical care and services, particularly in the mental health field, assisted living facilities and nursing homes.

“There are people in need having services delayed and people are suffering,” said Patricia Carty,  Executive Vice President & Chief Operating Officer of The Mental Health Center of Greater Manchester.  “New Hampshire can do better.”

Bill Rider, the center’s president and chief executive officer, said the state’s deferred investment in the healthcare safety net “has been cited to be the essential or root cause of the severe healthcare workforce shortage we are experiencing these days. Basically, the people who would fill these health care jobs have moved elsewhere for better prospects” or have chosen other fields.

He said the good news is there are solutions but those are found in the month-long, stalemated budget.

Rider urged the dozens of healthcare workers attending the news conference at the center’s downtown Wall Street offices to call their legislators about the issue.   One attendee offered up the number to reach the Governor’s office — 271-2121.

Gary Cahoon, vice president of the New Hampshire Association of Residential Care Homes (NH ARCH), the state-wide organization of assisted living/residential care providers, said this year the Carpenter Home in Swanzey and the Gafney Home, in Rochester, both not-for-profits,  shut down.

The Carpenter Home, a town-owned not-for-profit organization, had provided services to the elderly and disabled for southwest NH for nearly 90 years, from 1930 to May of this year.

Cahoon talked to the town manager who said there were two reasons for the closure:  first, an inability to hire and retain qualified staff, and second, the basic inadequacy of Medicaid funding to sustain their operations.

“The rates, in other words, were too low,” he said.

With low rates, wages can’t be raised for those workers, the healthcare professionals said.

The Gafney Home, founded in 1904, also cited inadequate Medicaid rates as a primary reason for closing.

Cahoon said the closing of these two homes, which together served NH residents for 205 years, “underscores the urgency of the situation we face as a state.  Every day we delay and do not produce a meaningful increase in reimbursement rates, healthcare organizations both large and small across the state become weaker.  Many are on the brink of failing.   If they fail, those who will suffer most are the vulnerable people they serve.”

Another reason the Gafney House closed, he said, was that in recent years hospitals were putting pressure on assisted living homes to take in frailer and sicker residents because of the lack of nursing home beds.

“The demographics alone indicate there should be a problem, but that is only part of the story,” he said.  “On average a NH nursing home loses about $50 per day per Medicaid-funded resident.”

To make up for the shortfall, he said the common practice is to covert Medicaid-funded long-term care beds to Medicare or private insurance-funded rehabilitation beds.  The Medicare per diem rate is approximately double the Medicaid rate, he said.

Underfunding of long term care beds, he said, led to a shortage that caused “a crisis in assisted living and home health care. “

This is just “one of many reasons why Medicaid rates need to be increased across the board rather than be subject to ’targeted’ increases,” Cahoon said. 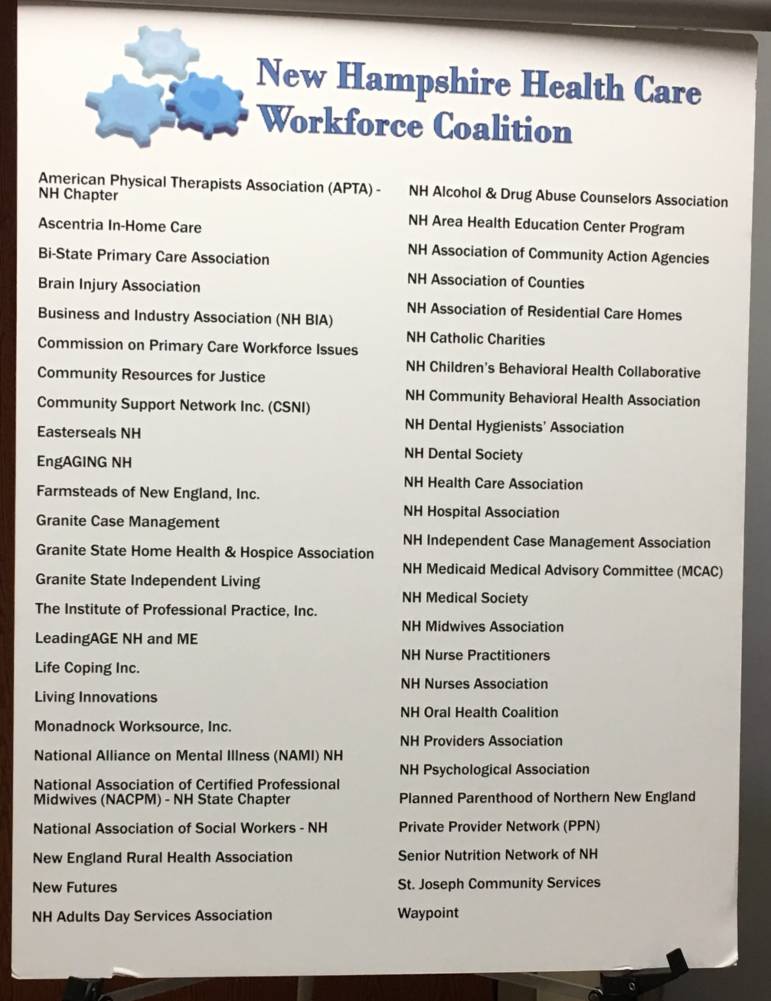 The proposed state budget increases Medicaid rates for mental health services by a total of $60 million in each of the two years.  The last time there was an increase it was in 2006 when it was upped by 2 percent when mental health professionals had requested an increase of 22 percent.

Since 2006, costs have increased by about 25 percent, the mental health professionals said.

The $60 million increase in the proposed budget amounts to a 3.1 percent increase for each of the two years, or what one woman said was a 62 cents an hour increase for those working with individuals with serious diagnoses.

The budget is at an impasse because two-term Governor Chris Sununu and Democratic lawmakers disagree over increasing business taxes and whether to use budget surplus money to increase aid to cities and towns.