MANCHESTER, NH – Manchester Schools were not prepared to supply each student with a computer when the COVID-19 pandemic first swept the state last fall, and orders for new devices have been delayed by a nationwide shortage and universal demand as remote learning became a necessary alternative.

While the district awaits thousands of devices on order, a group of local nonprofits and banks have teamed up to raise money and donate hundreds of laptops earmarked for low- and middle-income students who need a device.

Steve Cross, the district’s Chief Information Cybersecurity Officer, said the district had about 9,000 to 10,000 devices for a district of about 13,000 students last spring. And he estimated there were about 1,000 of those lower-income students most in need.

Sometime in April, local architect and Manchester Proud Coordinator Barry Brensinger reached out to Superintendent John Goldhardt and asked how they could help

“One of the items near the top of his list was getting technology, getting devices into the hands of the kids in the district,” Brensinger said.

Brensinger, who is a principal at the Lavallee Brensinger architectural firm, then picked up the phone and called Robert McLaughlin, the Executive Director of the National Collaborative for Digital Equity, a Weare-based national nonprofit committed to bridging the technological divide between poor and affluent students.

From there, the team grew. McLaughlin was already in talks with Mary Ford, the Dean of the School of Education at Southern New Hampshire University, contemplating a partnership to address the same issue.

And McLaughlin further suggested that banks would be “amazing allies.” Sure enough, they were able to get support from virtually every company that had a footprint in the city; a total of nine banks and six credit unions.

He said his organization had already laid the groundwork to streamline support from financial institutions, by spreading the word over the previous year how they can meet their federal Community Reinvestment Act (CRA) requirements — which require a certain amount of investment in low- and moderate-income areas — by helping to meet device needs for certain lower-income kids.

That said, McLaughlin said partner institutions have stepped up to donate regardless of the CRA requirements. In some cases, they aren’t applying it to the CRA, or they’re exceeding the minimum requirement, he said.

Thus was born Operation Lemonade, named for the giant lemon that life handed the city in the form of a global pandemic, and the initiative to turn it into something good.

So far, the collaborative effort has raised $120,000 to purchase 440 devices, all Windows 10 laptops. About 100 of those are still en route. Of the remaining 340, Cross said only about 40 remain to be distributed to students, and expects those will probably be gone by the end of the week.

McLaughlin said he placed each order on his personal American Express credit card whenever a financial institution made a pledge, to ensure the process moved as fast as possible, and each cent went toward the devices, which cost $250 a unit.

They were able to obtain the computers from for-profit tech companies such as Connection, Dell and CDW-G. McLaughlin said these partners stepped up to scrounge for devices and sold them at discounted rates.

“Everybody was stepping up for these kids,” McLaughlin said.

Brensinger said the response was overwhelming.

“Manchester Proud as its mission is about building community engagement and a sense of ownership in our public schools,” Brensinger said. “One of our core beliefs is our schools is an essential community asset.”

Other community organizations have helped fulfill students’ technological needs in other ways. The Bean Foundation provided a $9,000 grant to help families get broadband internet connectivity through mid-June 2021, according to Manchester Data and Technology Teacher Kelly Jobel.

Now, through the help of social workers connecting households to the program, Jobel said there are “very few” families without internet access.

Another organization called Victory Women of Vision, a Manchester-based nonprofit that serves the needs of refugees and immigrants in the city, is training about 20 teens and young adults to provide supplemental and multilingual tech support to new American students who need help with their devices, according to McLaughlin.

And McLaughlin said they are leveraging many of the same financial and educational partners who are helping with Operation Lemonade to develop a new, long-term career development program that aims to create a pipeline to careers in teaching or finance.

But the school district isn’t out of the woods yet in trying to meet its student device needs.

Cross said he estimates there are still about 500 low- to medium-income students who are in need of devices, and they’re still awaiting 4,600 Chromebooks from two separate orders over the past school year. 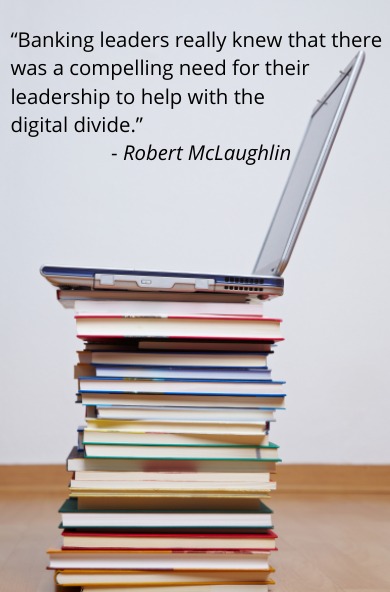 “We as a district ordered tons of devices but the larger the order the harder it is to fulfill,” Jobel said.

Cross said the first order had a smaller unit price because the supply-and-demand dynamics rose prices for everyone over the past several months.

Including cases, accessories, warranty insurance and management licenses, the larger order cost a total of $864,545, with each Chromebook priced at $185. The smaller order totaled $635,564 with a unit price of $265.

Funds from the federal CARES Act covered both orders, the first one retroactively, Jobel and Cross said.

They’ve also been able to buy smaller batches of 50 devices or so on an ad hoc basis over the course of the year, according to Cross.

The goal, Cross said, is to get the district close to having as many devices as they have students, which they should be able to meet when the two main orders are fulfilled. Their biggest overall deficit is in the high schools, he said.

But as long as students are taking the devices home with them for remote learning, there exists an additional challenge: breakage.

“As quickly as we push them out, we’re getting them right back damaged,” Cross said.

Before the pandemic, student devices were locked in the school facilities overnight. And they weren’t seen as an absolutely necessary component to education. Now, they’re not only necessary, students are taking the devices out into the world, where they constantly end up damaged, creating a “moving target” for one-to-one student access, Cross said.

He said he heard of one instance where a single student has been issued their seventh device after repeated accidents.