EXETER, NH — Two weeks ago, while watching the news and speaking with a co-worker on the phone, Win Fream, the senior director of product design and development at sports safety equipment producer Cascade Maverick Lacrosse became convinced his company needed to continue producing protective gear, but for the medical community rather than athletes.

Fream saw on the news that a reporter was talking to a hospital official who reported going to the hardware store to make face shields — which protect medical workers from liquid splatter. Instantly, he knew how his company, which is a subsidiary of Exeter, N.H.-based Peak Achievement Athletics, could help.

“We are experts in making protective gear. We can do this — we have the facility, we have all the parts we are using — let’s make these,” he said. He got on the phone with the CEO of his company the next day and convinced him to move ahead. 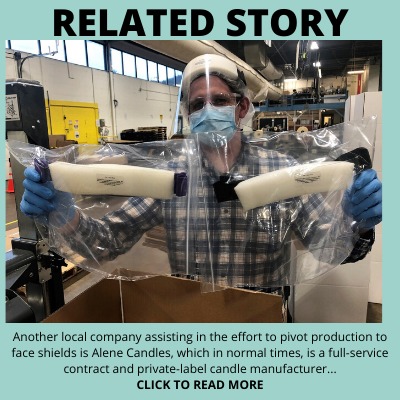 Like many manufacturers across the Granite State, Including Alene Candles in Milford [See Sidebar], which has also started making medical face shields for EMS and other medical personnel, Fream started looking for a way to make this solution work. Here’s how he did it:

Fream invited his next-door neighbor, a nurse practitioner at Lahey Medical Center in Burlington, Mass., to a product production meeting.

“When we design protective gear for lacrosse, we ask the professionals, ‘what do you need?'” Fream said.

A face shield is meant to be worn over a ventilator mask and protective eyewear or glasses, according to Fream. Fream and his designers learned that the mask must be removed and put on quickly by medical professionals, so a simple design was best, he said. The ones produced by Cascade feature a plastic shield protecting the face, a foam brow that fits snug to the forehead, and a strap to allow them to be one-size-fits-all.

Normally during peak season, about 40 to 50 seasonal employees would be producing sports protective equipment at Cascade’s Liverpool, N.Y., production facility. With the realities of COVID-19, there is a reduced number of workers producing the face shields — only about a dozen, according to Fream.

“We usually run an assembly line, and one person hands does something and hands it to the next person,” Fream said.

That isn’t possible with medical guidelines instructing everyone to be at least six feet apart to prevent the spread of the disease. Instead, workers use parts carts, making several parts at once and then wheeling them to the next person in the assembly line, Fream said, adding that the workers use masks and gloves themselves.

“Nobody is closer than six feet, which limits the production space we can use,” he said.

The workers who are assembling the masks are ones who decided to work. Many are staying home, according to Fream. The company sent many workers it could not use home. “That was emotional for us,” he said.

Fream had the idea on a Wednesday, and by the weekend was working on prototypes. The following Wednesday, they were setting up the new assembly line, and by that Friday they had made 3,000 of them. Fream estimates that the production facility could make as many as 6,000 per day by the end of this week.

The company is selling them for about $4 each, approximately what it costs to produce them, according to Fream.

Cascade is limited on production in comparison to demand, however. Fream said they are receiving orders for as many as 50,000 from certain buyers.

Instead, the company has put its design out for other companies to use, and is connecting different friends and business partners to help by making their own and filling the orders that Cascade cannot, he said.

“We’re not Amazon,” Fream said. “You can call up Amazon and order one pen, and they will happily put it in a box. We do shipments for teams, and our minimum order is 12. If somebody is asking for 5, 10, 1,000, whatever the number, that takes time to pack a box and put it together.”

The physical size of what Cascade can do is their limiting factor, according to Fream, but he also said it is difficult to know how sustainable it will be for the company to continue with all the uncertainty around the virus.

“If this keeps getting worse, people might just say they don’t feel comfortable coming in, and I have to respect that,” he said.

Fream would love to get back to the point of making sports equipment, and pointed out that the COVID-19 crisis is coming right in the heart of lacrosse season.

“We would love to be making sports equipment; that’s what we do best and what we’re good at,” he said. “If you’re stuck inside and you’re a lacrosse player right now, this has been a gut punch.”

Fream fell back on sports terminology to explain his passion for helping transform his company to assist during the crisis. He said the company motto is “passion to protect,” and further said it made sense to share their design rather than keep it proprietary.

“We’re maxed out and there’s a need, so the next person should step up and do this. That’s being a teammate. To score a goal is great, but an assist is just as damned good.”