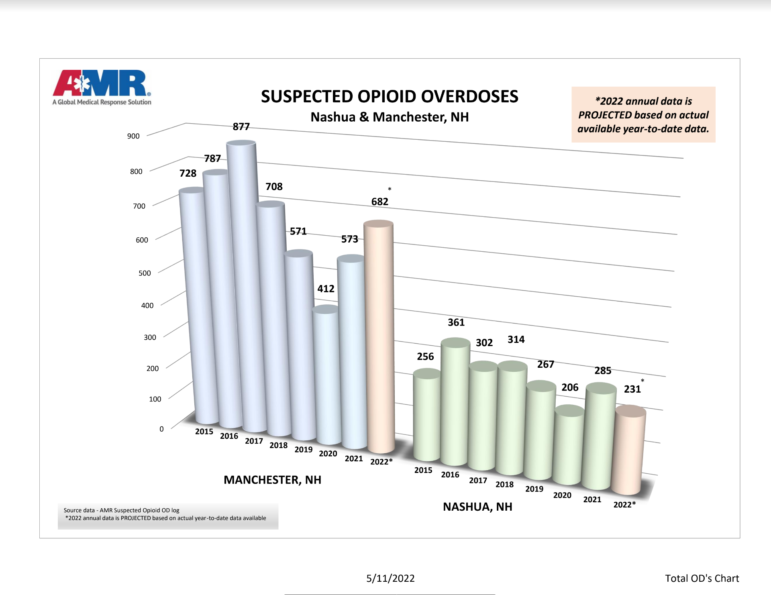 MANCHESTER, N.H. – American Medical Rescue (AMR), the ambulance service for Manchester and Nashua, is reporting that there were 57 suspected opioid overdoses in Manchester during the month of April.

Preliminary data shows that there were 14 likely opioid-related deaths in Manchester and Nashua pending verification from the Office of the New Hampshire Chief Medical Examiner, a total that is double March’s figure.

Seven of those suspected deaths occurred in Manchester, with 22 reported over the first four months of 2022.

“We continue to see and hear reports from patients that they believed they were not specifically using opioids and were surprised that they overdosed on an opioid.  This is suggestive of following a national trend of Fentanyl now being found in numerous types of illicit street drugs such as Cocaine and Marijuana,” said AMR Northeast Regional Director of Government Affairs Chris Stawasz. “AMR medics also continue to see victims simultaneously using both stimulants, such as methamphetamine or cocaine, along with opioids – sometimes on purpose and sometimes unwittingly. These cases are particularly challenging to deal with for first responders as they often pose a significant risk of unpredictable patient behavior.”

The overdoses occurred most commonly in a home, accounting for 37 percent of all incidents.