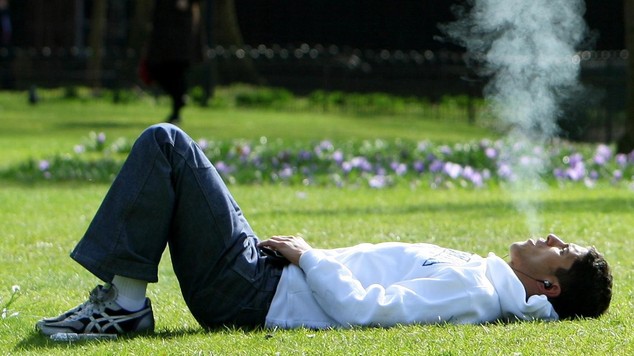 MANCHESTER, NH – Smoking is banned in five city parks, effective immediately, after the Board of Aldermen voted Tuesday night to test a no-smoking ordinance for six months.

Under the smoking ban, no smoking of any tobacco product, including vaping, will be allowed in five inner-city parks – Victory, Veterans, Bronstein, Pulaski and Stanton Plaza.

The ordinance, which was brought forward by Manchester Police Department, is intended to curb the increased incidences of spice being smoked in city parks. Assistant Chief Carlo Capano said a secondary issue of litter is also behind the ordinance

The decision to limit the pilot of the ordinance to just five city parks came after discussion over how police would enforce such an ordinance citywide. Alderman-at-large Dan O’Neil raised the issue of whether, for example, cigar smoking would be prohibited at Derryfield Country Club.

Acting City Solicitor Emily Gray Rice said the ordinance as written would apply to all city parks, which prompted Alderman Joe Kelly Levasseur to suggest a pilot program at a limited number of parks.

Alderman Bill Barry said he had concerns that pushing people out of parks would create a situation where more people would stand along the perimeters to smoke, creating an inconvenience for pedestrians.

Alderman Barbara Shaw asked whether receptacles would be placed for people to properly dispose of cigarettes before entering parks.

Assistant Chief Capano spoke about the condition of city parks, which he described as “disgusting,” and added that although city parks should be a destination, families aren’t going there.

Police have recently written 20 summonses to individuals for smoking spice, Capano said, noting that the resurgence of spice was one of the factors that led police to propose the ordinance. Chief Nick Willard previously introduced the idea by noting that smoking pans in public parks is a national trend. During the meeting Alderman Levasseur noted several other New Hampshire towns were following suit.

When asked how the ordinance would be enforced, Capano said they will do their best as an agency,  just as they do with speeding or panhandling ordinances.

In most cases, first-time offenders would be fined $50, with $100 for a second offense. A third offense would mean a trip to court.

Police would work with public works on signage announcing the ordinance, Capano said.

The board voted to pass the ordinance, with only Alderman Shaw voting against.

The ordinance is below:

No Smoking In Five City Parks

The Board of Mayor and Alderman passed a city ordinance which bans smoking in five City of Manchester Parks at the August 15th BMA meeting. The parks include; Bronstein Park, Victory Park, Veteran’s Park, Stanton Plaza and Pulaski Park.

The smoking ban takes effect immediately at the aforementioned parks; however the Manchester Police Department will spend the next two weeks educating park goers about the amended change to City Ordinance 96.06. Multiple “No Smoking” signs will be placed in the parks during the next two weeks.  The Board of Mayor and Alderman has implemented the smoking ban on a temporary basis and plan to revisit the amended change to the ordinance in six months.

(H)  Smoke.  Smoke any tobacco, tobacco related product, filter or other plant or weed except in such areas as are specifically designated for smoking by the Public Works Director, or his or her designee, subject to the provisions of state law and review by the Health Department. The Commission may prescribe such terms and conditions as it deems appropriate to smoking to the designated area or areas.  For the purposes of this section, “tobacco related product” means any product containing tobacco or nicotine, including but not limited to cigars, pipe tobacco, snuff, chewing tobacco, dipping tobacco, bidis, snus, dissolvable tobacco products, and electronic cigarettes; provided, however, that such term shall not include any product that has been approved by the U.S. Food and Drug Administration as a tobacco cessation product.  This section shall only apply to the Stanton Plaza, Victory, Veterans, Pulaski, and Bronstein Parks and shall expire six months after the date of passage.