BEDFORD, NH – When you meet an athlete whose talent and determination match the trajectory of his Olympic dreams, you do all you can to support his success. Such is the reason Bedford-based Rise Private Wealth Management, a private wealth advisory practice of Ameriprise Financial, LLC, is excited to announce their sponsorship of Olympic Triathlon hopeful, Adoh (Andrew) Doherty.

Adam Mulia, a financial advisor at Rise, noticed a group of individuals moving training and workout equipment into a home a few houses down from his then home in Bedford. Curiosity led him to introduce himself, and he soon learned that the house was full of seven professional triathletes under the training of 2020 USA Triathlon elite development coach of the year, James Petersen, head coach and founder of JP Elite. Having a passion for running, Adam was very interested and shared in the exciting new connection and sponsorship possibility with Rise colleagues.

At the age of 11, Adoh (pronounced like Play-doh) set a goal of becoming an Olympic athlete, stemming from his father’s unfulfilled legacy. Now acting as his manager, Adoh’s father was a key inspiration in his son’s life. While watching his father’s Hall of Fame induction ceremony as a world-class hurdler many years ago, it clicked that he was watching greatness and had a burning desire to follow in his footsteps. Although his father was just shy of participating in the Olympic games, Adoh made a promise to him that he would do what his father couldn’t – complete the journey of the Doherty legacy and become an Olympic athlete.

Despite suffering multiple injuries throughout his years of training, including a broken back and breaking both his legs, Adoh’s perseverance always prevailed. Adversity taught him skills that can’t be taught in a locker room, such as mental toughness and grit, and Adoh has continued to have the burning passion to succeed. His disciplined behavior, hard work, and consistency are all attributes that will lead him to accomplish the long-term goal that he has set for himself. His tenacity represents the future, and his values line up with those at Rise Private Wealth Management.

“When Adam first mentioned he wanted to introduce us to an Olympic hopeful and entertain the idea of sponsoring him, we were thinking, ‘What could we possibly have in common with a triathlete?’ but once we met Adoh, we knew he was someone we wanted to collaborate with,” said Robert Bonfiglio, MBA, CFP®, ChFC®, co-founder of Rise Private Wealth Management. “Adoh shares many of the same values that we do at Rise; integrity, health, family, growth, helping people. Although our day-to-day lives and jobs are different, we both are passionate about always being the best versions of ourselves and to be the best at what we do.”

Rise Private Wealth Management will be hosting ongoing events, open to the public, focused on Adoh’s story and path to the Olympics. For more information, contact Emma at emma.biedrzycki@ampf.com. 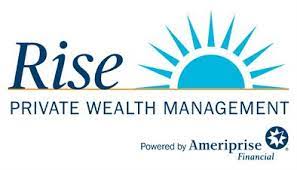