Manchester Ink Link is simulating the entire 2020 New Hampshire Fisher Cats season as we wait for the real baseball to return.

In case you missed it, here’s are our previous stories on the Fisher Cats’ simulated season so far.

MANCHESTER, N.H. – The Fisher Cats fell to 6-7 in extra-inning games this season, with Harrisburg second baseman Luis Garcia taking a 2-2 fastball to left-center field for a walk-off double.

New Hampshire started with a 3-0 lead, but two consecutive doubles sparked a two-run Harrisburg rally in the top of the fifth. Ben Revere answered with a solo home run for the Fisher Cats in the bottom of the fifth, and that’s where things stood until Cole Freeman’s two-run double in the ninth evened things up for the Senators.

With Freeman’s double, Brett Cecil was on the hook for his second blown save of the year, with reliever James Dykstra getting the loss after appearing on the mound for New Hampshire in the tenth and eleventh. Dykstra is now 2-1 on the year.

MANCHESTER, N.H. – Alejandro Kirk collected five RBI off a double and a home run, helping New Hampshire even their series with Harrisburg.

Kirk’s two-run homer in the third gave the Fisher Cats a 3-2 lead, their first lead of the day. After Harrisburg rebounded with three runs in the sixth, Kirk’s bases clearing double in the eighth put New Hampshire back in the lead for good.

Alejandro wasn’t the only Fisher Cat with a hot bat on Tuesday, as Dieferson Barreto, Josh Palaciso, Kevin Smith and Roemon Fields joined Kirk with two hits each on the day. Palacios mirrored Kirk’s day, finishing with a home run and double.

On the mound, Anthony Kay left after five innings of work, giving up two runs off five hits and a walk, striking out four Senators.

Tristan Archer (1-2) was the winner for New Hampshire, responsible for the final five outs of the contest.

MANCHESTER, N.H. – The Fisher Cats collected a baker’s dozen of hits, sending the Senators out of the Granite State with a series loss.

Every starting Fisher Cat batter had at least one hit in the win, excluding leadoff man Ben Revere. Alejandro Kirk had three hits, including a pair of doubles. Other significant offensive contributions for the ‘Cats included Josh Palacios’ home run and a single, Ryan Noda’s homer in the fifth and Deiferson Barreto’s pair of singles.

Thomas Pannone (2-7) lasted six innings in his start for New Hampshire, giving up three runs off five hits and two walks, striking out six batters. He left after exactly 100 pitches, 64 of which landed for strikes.

Emmanuel Ramirez earned his first save of the year, going one batter over the minimum during the final three innings of the contest. 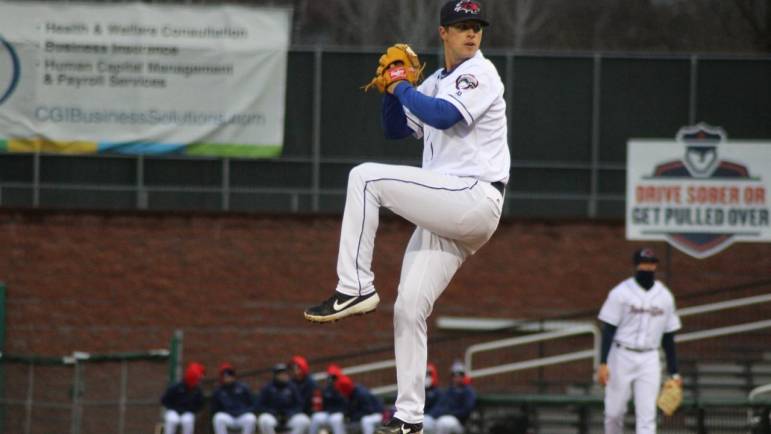 READING, Penn. – The Fisher Cats came out on the wrong side of Thursday’s pitching duel in what was their 13th loss to the Fightin’ Phils this season.

New Hampshire’s best chance came in the fifth, when a pair of two-out hits helped cut Reading’s four-run lead in half.

The Fisher Cats ended with just four hits in the contest, with two of which coming in the form of doubles from Roemon Fields and Alfredo Silverio.

READING, Penn. – The FIghtin’ Phils mustered just three hits off Fisher Cat pitching, but those three hits all came during a third-inning five-run rally that gave Reading another win.

Fisher Cat starting pitcher Ryan Borucki didn’t survive the third, allowing four walks along with the three hits, dropping to a record of 3-8 on the year.

READING, Penn. – On Friday, New Hampshire outhit Reading and that was the case again on Saturday, but the FIghtins’ made the most of their opportunities as they rattled off another win against the struggling Fisher Cats.

Nick Maton’s two-run homer in the first highlighted a three-run first inning for Reading, with Reading’s other three runs coming during an eighth-inning rally that saw eight men come up to the plate.

New Hampshire’s runs came in the sixth inning where Mac James’ single brought Alejandro Kirk home, and in the seventh inning where Josh Palacios’ single bringing Alfredo Silverio home all the way from second base.

Kirk had a double and a single during the contest, with Silverio and Christian Williams also contributing a pair of singles in the loss.

On the mound, the loss went to Patrick Murphy. Now 2-6 on the year, Murphy gave up three runs off seven hits and a trio of walks over five innings. He now has not won a game since May 1 against Binghamton.

READING, Penn. – Reading completed the sweep, coming back on the power of a three-run homer by Eastern League All-Star Game MVP Mickey Moniak.

Moniak’s blast in the seventh erased a New Hampshire lead built off Alejandro Kirk’s two-run home run in the third and another three runs collected in the fifth.

Although New Hampshire tied things up at six a half-inning after Moniak’s homer, an RBI single from Reading’s Darick Hall took the lead out of New Hampshire’s hands once and for all.

Anthony Kay lasted five innings in his start for the Fisher Cats, allowing three runs off four hits and seven walks. The loss went to Chandler Shepherd (3-4) after he gave up Hall’s single, one of three hits he’d allow in the seventh and eighth.

At the plate, Kirk added a double to his homer, with Mac James and Alfredo Silverio also adding doubles. Silverio added a single, with Ben Revere adding a pair of singles and a walk.

Pitcher of the Week: Kaleb Fleck – Fleck marked his first two Fisher Cat appearances with no earned runs allowed over three innings, striking out six batters while allowing just one hit and one walk.