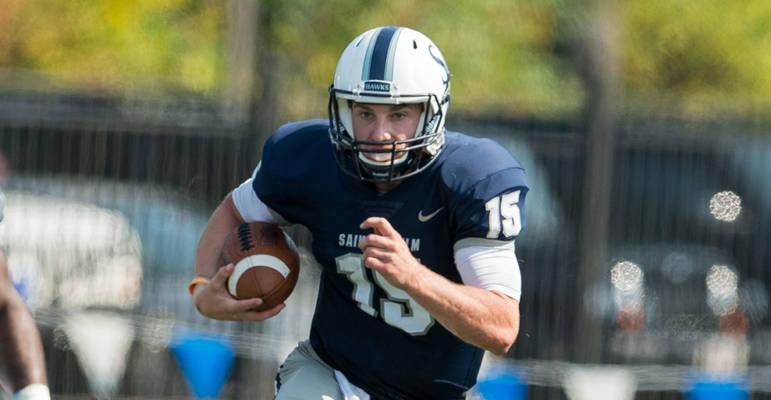 A feat that some assumed would be unattainable for a struggling football team, Saint Anselm came through in a punch out fumble by freshman Sulton Woolbright, Jr. (Temple Hills, Md.) in the last minute drive to win their third straight game Saturday afternoon 25 to 24 against the Southern Connecticut State Owls.

The last time the Hawks were in a streak like they are currently in, it was 2014 when they rode a five game stretch when the season kicked off until the beginning of October.

On the day, the Hawks were consistent in all four quarters, scoring in each one to mildly keep in line with the pass heavy Owls, who had bursts of scoring during the game. At the helm, senior  quarterback Eric Fairweather (Londonderry N.H.) had one of his best performances statistically all season, going 24 for 43 on completions with 347 yards in the air and three scores, while tacking on a rushing score to go with 12 carries. Freshman wide receiver Anthony Brown (Belton, Texas) helped get down the field with a 150 yard performance on seven catches, while senior receiver Shawn Donovan (Abington, Mass) caught all of Fairweather’s recorded touchdowns with 73 yards on the day.

With Fairweather’s statistical outing Saturday, the New Hampshire native now owns the Saint Anselm football record of touchdowns recorded in a career with 67, as he is still in progress of completing the season, but passed former standout Yianni Gavalas, who had 64 in his name.

For the Owls, freshman gunslinger Jackson Ostrowsky (Mount Pleasant, Mich) had himself a day on the field, going 28 for 56 on completions with 411 yards and three trips to the end zone on passes. The Michigan native also had the cushioning of two receivers exceeding 150 yards to help take the upper hand over the Hawks for the majority of the game. Graduate transfer Brandon Swain-Price (Stoughton, Mass) put up video game numbers, hauling in 11 passes for 192 yards and three times crossing the white line.

For the Hawks, the streak looks to be in tact as they are taking the trip next Saturday to the grounds of Bentley University (3-4), who are fresh off a 28 to 21 victory against Pace. Both the Hawks and the Falcons are neck and neck in the Northeast 10 standings, combined in a in- conference five way tie at second place.