Early lead versus late rally: on Saturday afternoon in Binghamton, the former trumped the latter.

The New Hampshire Fisher Cats could not overcome an early lead accumulated by the Binghamton Rumble Ponies, falling by a score of 7-3.

Binghamton’s Matt Oberste brought home Luis Guillorme on a sac fly in the first and would go on to add four more in the first three innings, including three in the third sparked by an Oberste homer.

The onslaught that brought the early lead would chase New Hampshire’s Sean Reid-Foley, who allowed eight hits and four earned runs in those three innings of work, striking out and walking two. 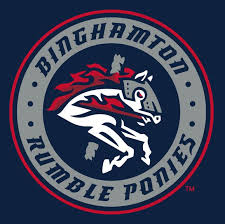 In Reid-Foley’s five appearances so far this year, he’s escaped the third inning only once, last Sunday’s contest against Hartford.

Gunnar Heidt grabbed RBI singles in the seventh and ninth and Tim Lopes also grabbed an RBI, but that it was too little, too late.

Binghamton’s Tomas Nido brought home Guillorme on a triple in the seventh to add salt to the Fisher Cats’ wounds.

Binghamton knuckleballer Mickey Jannis was outstanding through the first six innings. The 29-year old was perfect until there were two outs in the fifth, when he walked back-to-back hitters.

He didn’t allow a hit until the sixth but was eventually tagged for two runs when New Hampshire plated a pair in the seventh courtesy of RBI knocks from Lopes and Heidt. However, the two runs puts his season figure just above Reid-Foley’s Sunday outing, a total of six over four games.

With this latest performance, Jannis climbed to 3-0, with the three wins coming in consecutive starts.

New Hampshire will face the Rumble Ponies again at home on Thursday, May 4 after they conclude their road trip with a series in Reading.