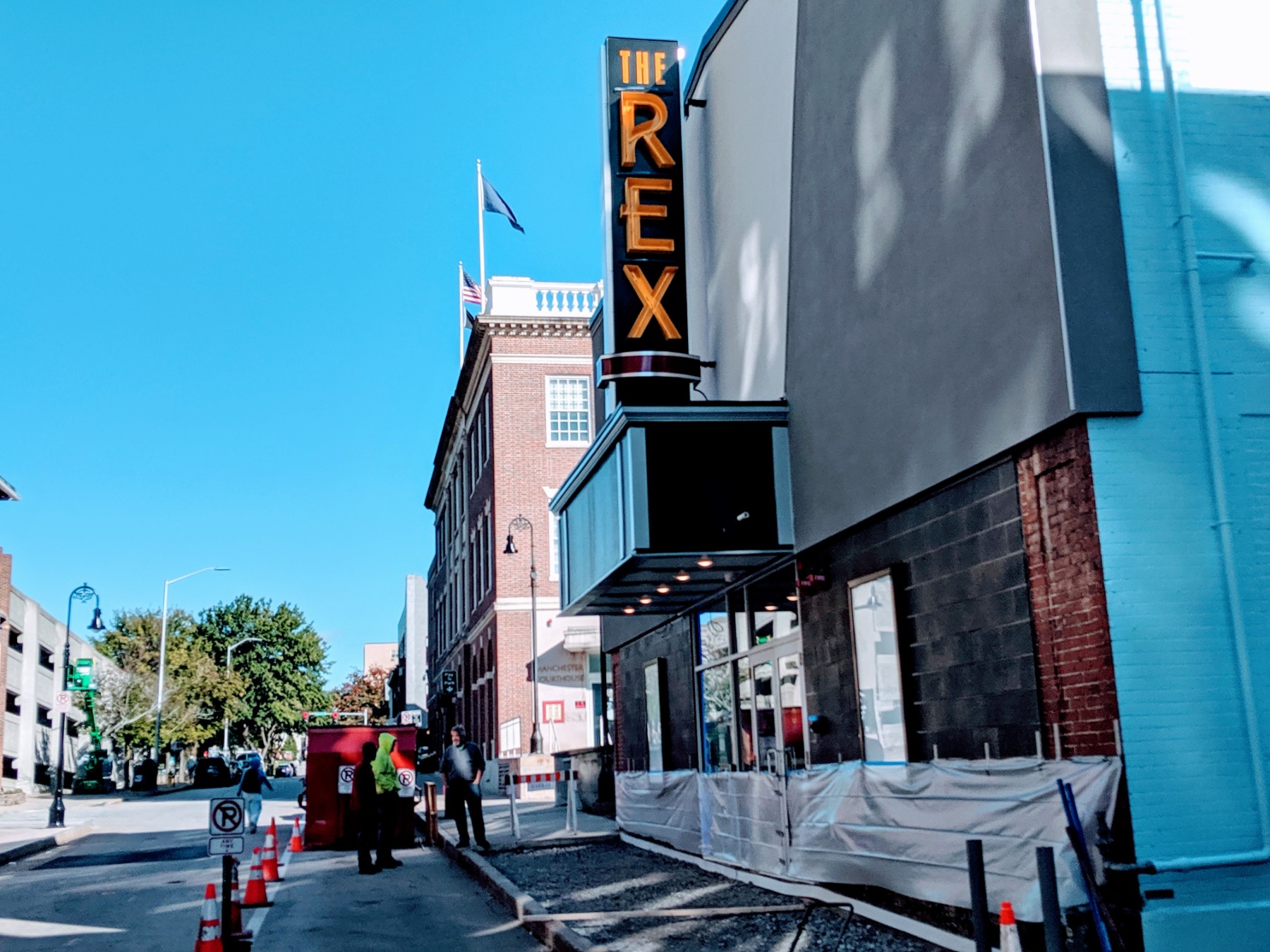 MANCHESTER, NH — The reimagined Rex Theatre on Amherst Street will ceremoniously open its doors this month,  ending some of the anticipation over the new look and feel of the old movie house. All that’s left are the last of the inspections and permits.

From a preliminary tour a few weeks ago, it is bright and contemporary and tasteful. The bones of it are sturdy and steeped in history but everything else is fresh and new. The Rex is the newest chapter in the city’s landmark history and in this incarnation, even the carpeting has a backstory (more on that in a minute).

Beyond aesthetics, what remains is speculation over what this 300-seat venue will mean to Manchester’s lively arts scene.

It’s much smaller than the Palace and considerably larger than The Spotlight Room, with floor seats that are removable and a generous balcony that still feels intimate. All that means the possibilities are yet to be discovered, says Ashley Therrien, Development Coordinator for the Palace Theatre’s newest holding.

“My favorite way to describe it is if the Palace and the Spotlight had a baby, it would be The Rex,” says Therrien. “It’s a marriage of what the other two places do.”

There’s room by design for corporate events, but it was revived for a reason: Manchester was lacking a mid-sized venue for live performances. Here, says Therrien, there can be room for a mix of musical genres — jazz, classical, country, folk. If all goes as planned, The Rex will deliver a new level of live entertainment and community gathering space to the city.

“We’re looking at a full spectrum of music,” says Chuck Stergiou, longtime co-owner of the Puritan, who serves as Executive Director for The Rex. He is bringing his years of business acumen to the mix, while Therrien, a thespian since age 5 and opera singer, who studied business and musical theater at Saint Anselm College, brings the panache.

When asked, Therrien and Stergiou agree that they’re in the market for national acts that will attract an array of age groups and demographics.

“We don’t want to pigeonhole ourselves. It will find its flavor in the first year or two,” says Therrien.

They’re already getting inquiries. The challenge will be booking the right acts that can sell out the house.

“Ideally we’d love to have local bands here, too — this would be the perfect venue to showcase Manchester talents, and even a lot of New England-based talent. We know we have a lot of bands that will go play Burlington [Vermont] and drive through New Hampshire to play Portland. We know we can tap that market as well,” Therrien says.

On the practical side, Stergiou says they will have the freedom to try things at The Rex that they haven’t been able to try at the Palace.

“That’s the beauty of being 300 seats. If we put an act here and it bombs, it’s not as big a loss as if something bombs over at the Palace,” says Stergiou. And that is also part of the strategy of having three completely different kinds of venues under one entertainment umbrella — four, counting PYT (Palace Youth Theater) at Emma’s Place Studios on Pine Street.

Also very much engaged in the process of what happens next for The Rex are Ray Garon, Palace Director of Booking, and Palace President and CEO Peter Ramsey, reviving the Palace in 2001.

“Peter’s overseeing the entire process, his years of wisdom and experience are invaluable,” says Stergiou.

As renovations took shape inside the theatre, the carpet became a conversation piece. From the balcony, it’s grayish with yellow streaks — reminiscent of a streetscape — and there are just a few prominent colorful squares that, without explanation, appear random.

Not so, says Caroline Morel of Manchester-based Dennis Mires, PA The Architects, who was tasked with creating a sense of place on a tight budget.

She explains that the carpet tiles were sourced from Interface, a commercial flooring company that specializes in sustainable products.

“On Interface “Specials” webpage, the stock may vary each week, the quantities may not match, but the products are offered at a highly discounted price. In other words, we had to work in an extremely constraining context,” according to Morel.

They chose tiles from the “Urban Retreat” collection in shades of sage and moss. But the real challenge was designing a pattern with the available inventory.

“As a designer, I don’t believe in random patterns. There is always an intent, and it is our job to articulate and signify it, even in the most subtle ways,” and so Morel chose to illustrate how the city of Manchester has been brought back within the theatre walls, literally and figuratively.

Explains Morel: “The moss-colored bands embody an abstraction of the East/West streets of Manchester, between Bridge and Valley streets. The moss color carpet tiles depict the parks and green spaces, and the two bright blue tiles represent the city blocks where the Rex and the Palace Theatres are located.”

And so we have it, The Rex, reimagined; an icon, revived. Its future still unwritten, and its success reliant on the vital relationship between those who are anticipating something fresh and relevant, and those tasked with making it happen.