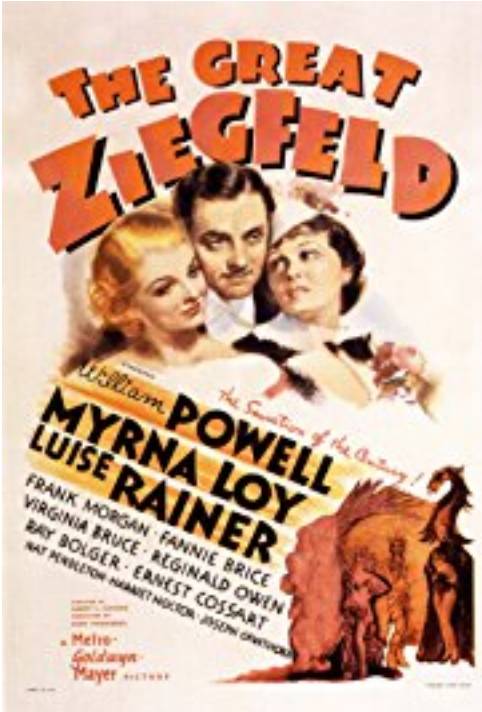 You have not seen glamour until you’ve seen 1932’s multi-Oscar winning, The Great Ziegfeld.

Based on the true-life story of the world-famous impresario, Florenz Ziegfeld, known during the 1920s for his meticulously crafted stage shows full of perfected glamour, lavishly ornate sets, tableau vivant and scantily clad, yet tastefully draped bevy of American beauties, as well as his womanizing manners.

The Great Ziegfeld depicts Florenz Ziegfeld’s roller-coaster rise through fame and his decent during the crash of 1929.

Both characters are charming and debonair, and although William Powell is the star and an impeccable actor, Frank Morgan steals scenes with his trademark befuddled mannerisms and comedic conversation.

The temperamental Anna Helm (Luise Rainer) is Ziegfeld’s first wife. The German-born Rainer plays a tempestuous actress delivering a  melodramatic, impertinent, unexpected performance, mostly humorous, earning her an Oscar nomination. Yet, when she says her final goodbye to her ex-husband, her performance turns sharply poignant, clenching the Oscar. Ranier, the first woman to win back-to-back Oscars two years in a row, rejects Hollywood after three years of explosive success, unwilling to yield to the stranglehold of the Hollywood star system that she is a part of. Almost six decades later, in her 80s, Luise, raising her head, straightening her posture, a smile gliding across her now-aged face, her eyes gleaming with pride, reflects on her critical decision of choosing her freedom, stating, “Look at me, I am an old woman, and I saved myself!”

Myrna Loy plays Billie Burke, Ziegfeld’s second and final wife. Loy originally started her film career in silent movies playing exotic vamps, eventually co-starring in the Thin Man series with her current co-star, William Powell, of which most agreed would not have been successful with any other actress.

The Great Ziegfeld must be seen multiple times. Once for the acting, once for the sets, and once for the costumes, as it is an impossibility to ingest the sumptuousness of each scene in its entirety in one take.

No expense was spared in this MGM $2 million dollar production (equal to 33.770 million today) and in 1945 the Ziegfeld Follies, appropriately directed by Vincente Minnelli, released in Technicolor, starring a stable of MGM players, the likes of Fred Astaire, Judy Garland, and a most beautiful young Lucille Ball.

One of the most extravagant film sets, still to this day, the first time I saw the monumental A Pretty Girl sequence, I impulsively held my breath until its conclusion. This scene cost over $200K to create (equal to $3.377 million today) . As the camera pans out, 4,300 yards of rayon fill the screen as a massive silk curtain slowly draws back, introducing the spectacle to come. A towering spiral staircase, with 175 steps weighing 100 tons, sits atop a slowly rotating stage. The camera ascends the staircase of 180 performers costumed in imaginative garb full of opulence and pageantry. As the camera pans out, the final full scene is unequivocally stunning, with its exit just as iconic as its entrance.

As if the tower scene wasn’t spectacle enough, the musical scene that follows introduces the young, Dorchester, MA, native, Ray Bolger, most remembered as the scarecrow in the Wizard Of Oz.

Fanny Brice stars as herself in this film, and her scenes with Ziegfeld are a testament to her comedic delivery and timing. Although not the typical expected American beauty, her talent is so considerable it thwarts her appearance. One can easily see why Ziegfeld chose her for his Follies. She performs her show-stopping “My Man,” a melancholy song, where Fanny visibly holds back tears. The juxtaposition of her spot-on performance as opposed to her vaudevillian comedy, for which she was famous, shows the range and perfection of her skill.

Oddly enough, Ray Bolger and Frank Morgan are not the only connection to the Wizard Of Oz.  Florenz Ziegfeld’s real-life second wife is Billie Burke, who played Glinda, the Good Witch of the South, in the famed 1939 film.

Directed by the Robert Leonard, known for his escapist pictures, art direction by the exquisite Cedric Gibbons, and costumes by the extravagant Adrian, each of which continuously and masterfully executes his craft.

This is not a true-to-life biographical film, and from all accounts, it was never meant to be. It is, however, meant to be an escapist, spectacle of luxurious decadence, and to this end it is unequaled. A film as great as its namesake, The Great Ziegfeld is sure to enrapture in its glamorous, visually-stunning luxurious excesses.