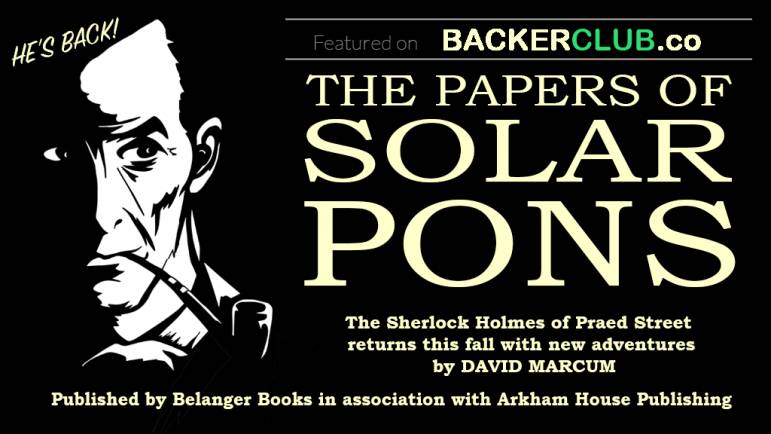 “It is with great pleasure & excitement to announce this news; The Derleth Solar Pons character will be coming back to life in the 21st Century!” said Danielle Hackett and Damon Derleth, co-owners of Arkham House Publishers Inc., in a joint statement. “We are pleased to be working on this project with Belanger Books and look forward to this release and future projects together.”

Solar Pons was created by August Derleth in the 1920s as a continuation of the Sherlock Holmes canon. Derleth, who famously created Arkham House Publishing to preserve the writings of his friend, author HP Lovecraft, had corresponded with Sir Arthur Conan Doyle, asking whether Doyle would be providing any new Holmes adventures. When Doyle said no, Derleth determined to write some himself. However, instead of writing more Holmes tales, Derleth came up with Solar Pons, a detective very similar to Holmes, and Dr. Lyndon Parker, his Dr. Watson. Eventually, between the 1920’s and his death in 1971, Derleth wrote over seventy Pons tales, set in that period between the end of World War I and 1939. “The Pons stories clearly take place in Holmes’s world, as the Great Detective himself is referenced by Pons and Parker on several occasions,” explained Marcum.

The Papers of Solar Pons: New Adventures of the Sherlock Holmes of Praed Street contains 12 new Pons adventures, ranging from the early 1920s to the late 1930s – the range of time described in the original Pontine Canon. Additionally, one of the tales contains a flashback to one of Pons’s early cases, soon after he set up his London practice. “And as something extra, the book also contains a Holmes story that I wrote a few years ago, explaining the origin of Solar Pons,” said Mr. Marcum.

Other Sherlock Holmes connections include a story where Pons is called upon to investigate the theft of Watson’s Tin Disptach Box from Cox & Co., and another where Pons and Parker revisit the site of one of the Holmesian Canon’s murders. And then there is the murder that occurs in the lab at Barts, where Holmes and Watson first met so many years before. “I very much appreciate the Derleth Estate for allowing me to bring these stories to the public, and hopefully to generate some new interest in one of the greatest detectives of all time, Solar Pons,” said Mr. Marcum.

Derrick Belanger, co-owner of Belanger Books, LLC hopes that Mr. Marcum’s book will be the first of many new Pons adventures. “Our goal is to publish yearly anthologies of new Solar Pons stories as creating new editions of the original August Derleth Solar Pons books. The character is beloved by many mystery fans who have been wanting more tales of the detective for decades,” said Mr. Belanger. “We will reach out to authors for contributions and release a call for story submissions in the near future.”