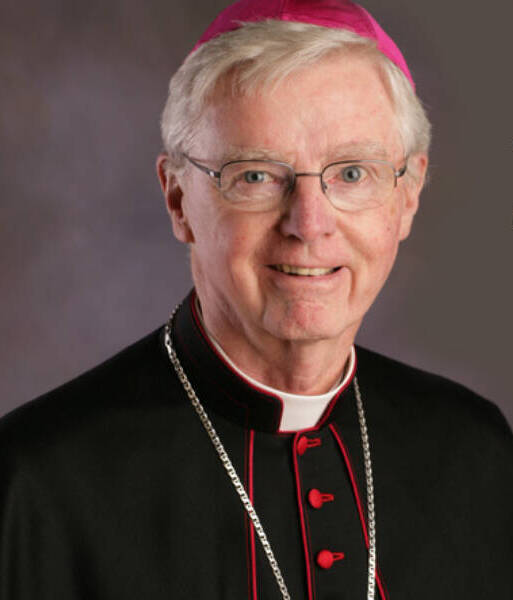 MANCHESTER, NH –The Most Reverend John B. McCormack, D.D., Bishop Emeritus of the Roman Catholic Diocese of Manchester, was called to his rest and to the glory of the Resurrection promised by the Lord at Mount Carmel Rehabilitation and Nursing Center on September 21, 2021, the Feast of St. Matthew and also the eve of the anniversary of his installation as Bishop of Manchester. In preparation for his death, the prayers of the dying were prayed for Bishop McCormack, and Night Prayer and the chanting of the Salve Regina were offered with him and for him. The staff and health care workers of Mount Carmel were around him, caring for him and praying for him as he died.

Bishop McCormack was 86 and served as the ninth Bishop of Manchester from September 22, 1998, until his retirement on September 19, 2011. His Episcopal Motto, “Christ in all things” epitomizes his lifelong commitment to the teachings of Jesus Christ and His Church.

“Bishop McCormack was a good and holy bishop who worked hard in times of great difficulty, demonstrating the virtues of kindness, compassion, and humility, right up until his passing,” said Bishop Peter A. Libasci. “Please pray for the repose of his soul, and for the consolation of all those who mourn his loss.”

Bishop McCormack was born on August 12, 1935 in Winthrop, Massachusetts, the son of the late Cornelius P. and Eleanor B. (Noonan) McCormack. He was predeceased by his brother Maurice F. McCormack, his sister-in-law Ilia McCormack, and his sister, Sr. Barbara McCormack, S.N.D. He is survived by three nieces, one nephew, and many great-nieces and nephews.

Bishop McCormack attended St. Mary’s Grammar School in Cambridge, Massachusetts and Boston College High School. He prepared for the priesthood at Cardinal O’Connell Seminary College and St. John’s Seminary in Boston. He was ordained by Richard Cardinal Cushing for the Archdiocese of Boston at the Cathedral of the Holy Cross on February 2, 1960. He pursued graduate studies at Boston College, earning a master’s degree in social work in 1969.

Following his ordination, Bishop McCormack served as associate pastor at St. James Parish, Salem, Massachusetts and later was appointed executive director of North Shore Catholic Charities Center in Peabody, Massachusetts, where he served from 1967 through 1981. From there, Bishop McCormack served as pastor of Immaculate Conception Parish, Malden-Medford, Massachusetts until 1984 when he was appointed Secretary for Ministerial Personnel in the Archdiocese of Boston. He was appointed by Pope John Paul II as an Auxiliary Bishop of Boston and was ordained as bishop on December 27, 1995. On July 21, 1998, Pope John Paul II appointed him the ninth Bishop of Manchester, a ministry that he retired from upon reaching the age of 75 in 2011. Upon his retirement, Bishop McCormack remained actively engaged in parish ministry at St. Joseph Cathedral, and he continued to celebrate the sacraments of the Church in the Diocese of Manchester. He supported many charitable causes and in particular, served as a member of the Board of Directors of Catholic Relief Services.