MANCHESTER, NH – Michael Demille was intoxicated Thursday night when, armed first with a handgun and then with an AR-15-type rifle, he shouted from his balcony that he was “the white devil,” while tossing the weapons into the air, police said.

Demille, 49, of118 Beech St., Apt. 6, entered not guilty pleas to two counts of reckless conduct with a deadly weapon and one charge of criminal threatening at his arraignment Friday in Hillsborough County Superior Court Northern District.

Judge N. William Delker ordered Demille be held in preventive detention, that is, without bail, because of the “highly dangerous alleged conduct of throwing a handgun and an AR-15 up in the air on a deck while making threatening comments to the neighbors.”

The judge also ordered a preventive detention hearing for July 20 at 1:30 p.m. because he is “particularly interested in learning more about the past conduct described in the affidavit as well as the observations of other neighbors,” according to his bail order.

A neighbor told an officer this type of behavior by Demille was common although she had not seen him act that way with firearms.

Police found more than 20 firearms – pistols and rifles – inside Demille’s apartment along with white supremacist materials.  Investigators referred the case to the New Hampshire Attorney General’s Office for further investigation into whether there were any civil rights violations.  Police also continue to investigate Demille’s intent and the potential that the incident is a hate crime.

According to police and court documents, about 6:30 p.m. multiple calls were received about a man with a confederate flag waving a handgun around, screaming and pointing a rifle at passing cars.

Police arrived to find a highly agitated and inebriated Demille ranting, making references to white supremacy and shouting that he is “the white devil.”   Demille was wearing an empty holster when arrested without incident.

Five people, including Demille’s girlfriend, two children and two men, were inside the apartment while Demille was on the balcony.

He told Officer Zachary Liupakka he had been drinking with two male friends.

He said there was no argument or anything that sparked him going out onto the balcony although he said he had ongoing issues with his neighbors on the first floor.  He admitted to being armed with a handgun while on the balcony and screaming, “I am the white devil! Everyone hates me!”

He first went out onto the balcony with handgun that he waved around and threw up into the air while proclaiming he was the devil.  He then went back inside, retrieved an AR-15-style rifle, went back outside and continued screaming and tossed the rifle into the air.

He said he did that because he wanted his neighbors to know he is not “someone to fuck with” and he is “not a pussy.”

Liupakka said in his affidavit that Demille was unsteady on his feet and slurred his words throughout their conversation.

Police spoke with an upstairs neighbor who said she feared for her safety and that of her family’s.  She said Demille waived around his rifle and pointed it in her direction.  She said she knew a bullet from the rifle had the capability to penetrate the walls and possibly hurt her or her family.

She said this type of behavior by Demille was common but she had not seen him act that way with firearms.

“This was one of two gun-related incidents in Manchester last night,” said Police Chief Allen Aldenberg.  “While we are seeing success in reducing gun crime in Manchester, both incidents are very concerning and Manchester Police will continue to relentlessly investigate and arrest those involved in these types of incidents.  The alleged actions of Mr. Demille are extremely concerning and Manchester Police, in conjunction with law enforcement partners, will investigate whether this incident was motivated by prejudice.  There is no place for hate crimes in this community and it will not be tolerated.”

Around 7 p.m., 30 minutes before the incident involving Demille, police went to 503 Hevey St. for reported gunshots.

Residents told police they heard male voices yelling in the common hallway and what sounded like gunshots.  Police found shell casing and a kitchen knife on the stairs.  Those involved already had left when officers arrived. 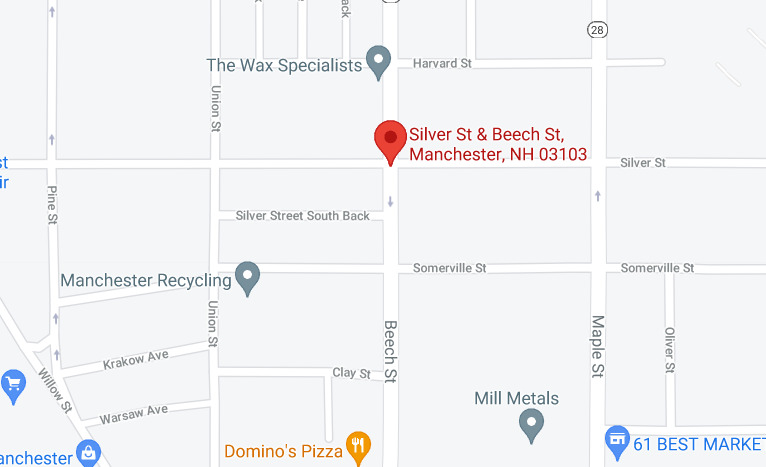