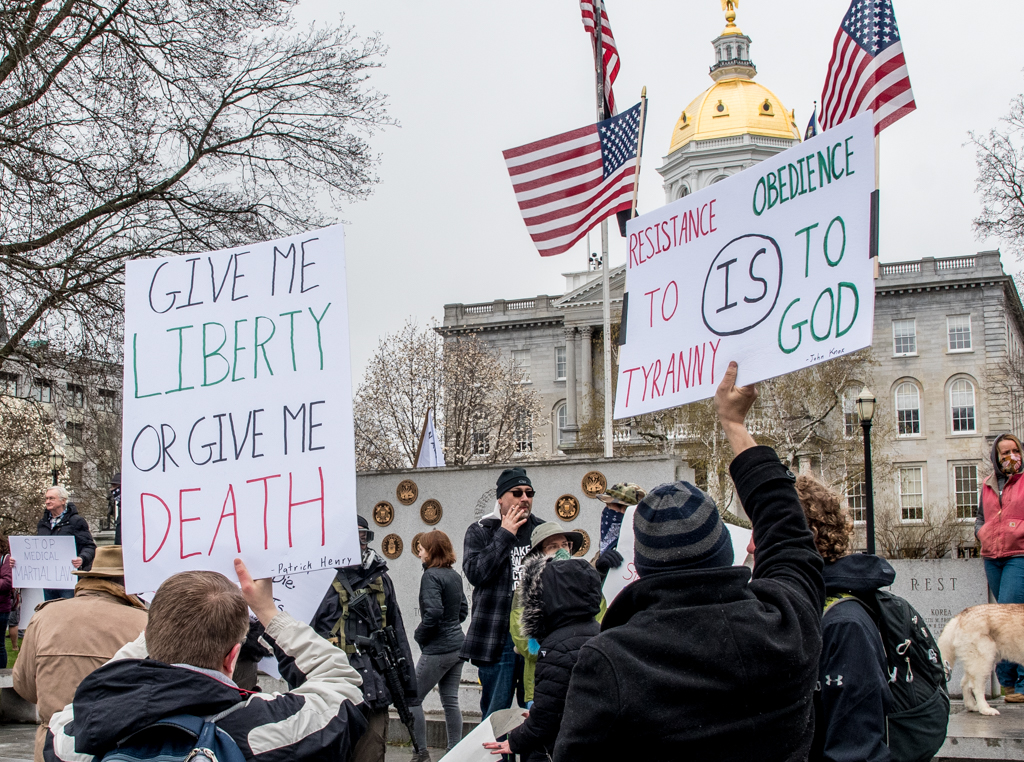 CONCORD, NH — One of the organizers of the April 18 #ReopenNH rally at the State House asking Gov. Chris Sununu to end his stay-at-home emergency order said it was so successful another one is in the works.

Former state Rep. J.R. Hoell, a Republican from Dunbarton and an organizer of #ReopenNH, said plans are underway to hold another rally soon. Sununu is expected to decide whether to extend the order soon, as well.

Hoell said the group #ReopenNH is still collecting names on a petition to present to Sununu and have already gotten 4,000 signatures. Although organizations with similar names have sprung up in other states, Hoell said #ReopenNH is not affiliated with them, and is solely a grassroots effort in New Hampshire.

He also said there is no connection to President Trump, who has been anxious to get businesses reopened again around the country.

“There are other options” to a lockdown that haven’t been properly vetted instead of closing all non-essential businesses, Hoell said, adding the “one-size fits all model” isn’t looking at data that could be more efficient and less detrimental to businesses while protecting people, especially the elderly.

The stay-at-home order went into effect March 27 and closed all non-essential businesses. It ordered people to stay home unless they were going to work, shopping for groceries or exercising outside, among other exceptions.

With Coos County having two reported cases of COVID-19 compared to 70 percent of the state’s cases in Hillsborough and Rockingham County in southern New Hampshire, it doesn’t make sense to put so many people out of work, he said.

As of Sunday, 41 people have died from COVID-19 in New Hampshire and 1,392 tested positive and the numbers increase daily.

Dr. Benjamin Chan, the state’s epidemiologist, has said that the true number of positive COVID-19 cases is unknown because of limits on testing. He said it is widespread in New Hampshire.

And Sununu has made it clear that he is putting safety first and won’t reopen the state until he is satisfied it won’t start another round of COVID-19 infections. In the emergency order, Sununu ordered non-essential businesses closed and said people should stay home if they aren’t going to work, shop for groceries, going for a hike or other exceptions.

Hoell said the state isn’t collecting the right information to determine which people may have already had the virus and recovered. “Why should we treat the entire state the same as we treat Nashua and Salem and Manchester,” said Hoell.

Better data is needed instead of a mass shutdown, he said.

“We need another rally. It’s time to make this issue front and center,” Hoell said.

He estimated there were 350 people at the rally. Although there were no official estimates, some photos of the event appeared to show upwards of at least 100 people.

He said there were also 50 cars that were driving by with passengers that were participating that would add at least another 100 people to the count.

Hoell acknowledged that violating emergency orders can result in criminal charges. No more than 10 people are allowed to gather together.

“If they want to send someone to arrest me,” Hoell said he would fight the charges to the Supreme Court arguing the orders are obviously unconstitutional.

Hoell said he saw no police at the rally. Concord police deferred questions to State Police, who did not respond to questions from InDepthNH.org.

Sununu’s spokesman sent out an emailed statement on Saturday to reporters who asked saying: “New Hampshire’s success at social distancing and mitigation efforts has led some to believe that COVID-19 is no longer a serious threat, but we are unfortunately in the middle of a worldwide pandemic and only six weeks in.

“I would like to urge Granite Staters to be patient. I empathize with the sentiment behind today’s rally, but we must be responsible and patient in our actions.  I have no doubt that our economy will come back at 100%, but we are being responsible and laying the groundwork with a phased approach that works for NH.”

Hoell said there were a handful of state representatives at the rally, all Republicans. There were people from the right wing, but also some Democrats and libertarians, he said.

“I went as a concerned non-essential Granite Stater and Republican State Senate candidate (District 20) who believes the government’s response has resulted in the prevention being worse than the cure. The government does not have the right to pick economic winners or losers, nor force us to stay in our homes, especially not when, here in Manchester at least, NOT ONE city employee has lost their job or even been furloughed. Clearly, we are NOT ‘all in this together.’”

Gericke described the crowd Saturday as “an interesting mix of people, from health freedom activists to Free Staters. I didn’t really get an overt partisan slant, it wasn’t ‘Trump-forward’” although there were some.

“There were teachers and nurses and moms, there were politicians and state representatives and masked armed dudes, there were laid-off workers, a few people who have been deemed essential but wanted to show their solidarity, and many who have lost their jobs and want to get back to work,” Gericke said.

She said she went because “at least 124,000 Granite Staters have been put out of work– that’s the population of Manchester and Amherst combined, and that’s a devastating blow to our state’s economic health which we will feel for a long time. Many small business owners will never recover. I went because my favorite Manchester restaurant, the Turkish restaurant Matbah, shut down permanently.”

“But I am also very concerned about the destruction of the economy with all its  knock-on negatives like increased suicides, more substance and domestic abuse, children dying by the hundreds of thousands in impoverished countries, and I worry about the expansion of authoritarian government policies without proper oversight or citizen control,” Gericke said. ¨If they can lock us down on the say of the W.H.O. now, what is next?”