MANCHESTER, NH – On June 15  at noon the City of Manchester in honor of National Pride Month will raise a pride flag to be flown at City Hall for one week. Mayor Joyce Craig along with Ward 3 Alderman Tim Baines and Executive Council Member Christopher Pappas will be in attendance to offer support from the city and state in this movement of progress for the city of Manchester.

Robb Curry and Kyle Davis, owners of Madear’s restaurant, approached Craig to personally invite her to stop by the restaurant during any of their Pride month events, and also to ask whether the city would consider raising a Pride flag at City Hall. 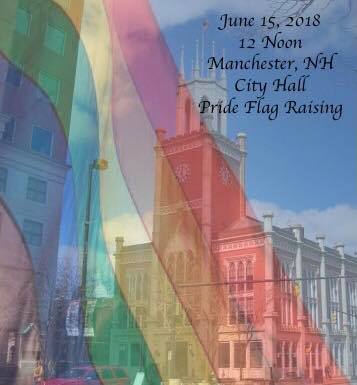 Craig said she would be proud to show support for the LGBTQ community.

Curry told the Mayor that after posting something on social media last week about their restaurant’s upcoming events, he got calls from three parents of kids who are transgender or transitioning, looking for Pride events in the city they could attend together to be supportive.

“What it means to me, being Southern, if you go to New Orleans, there are Pride flags along Bourbon Street, and they are something to be proud of, but they also put us in a box. Those pride flags are there to tell us this is a safe place, this is your area. Me, I’m comfortable in my skin to go anywhere and be whoever. But you can’t do that everywhere. I understand the hardship of being in the closet.  So to be in a place like Manchester, where you can show your pride and be part of that group, to me, it resonates as a safe place, to have the city raise a flag,” Curry said.

Statistically, New Hampshire’s LGBT population is estimated at about 49,000 of the state’s 1.3 million residents, or about 4.6 percent. And although the city has made strides toward equality and acceptance, there’s much more that can be done legislatively, and publicly, to provide equal opportunities for all residents, regardless of whom they love.

Madear’s is one of several local businesses in the city which happen to be owned and operated by  members of the LGBTQ community, says Curry, including Ray “Doogie” Sweet of Doogie’s Bar and Grill, Tim Kierstead of The Element Lounge, Bill Stelling of Kelly Stelling Contemporary, Jeff Albair of Human Touch Massage, and Julien Pepin of Julien’s Corner Kitchen.

“These – and many other business owners – are part of what is a very vast community right here in Manchester, and this is a way of allowing these pillars of the community to show everyone that there is support and tolerance in Manchester,” Curry said.

All are welcome to gather at City Hall Friday at noon while the Pride flag is raised.