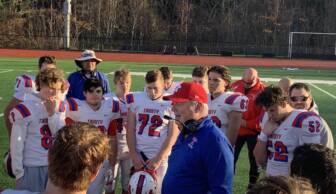 Pelham High won its second consecutive Division III State Championship and put an exclamation point on an historic season with a dominant 50-14 win over Trinity High on Saturday afternoon in Bedford.

The Pythons’ dominance was complete from start to finish. They raced out to a 36-0 halftime lead, scoring through the air, on the ground, with defense and on special teams. The lead ballooned to 50-0 after three quarters before the Pioneers were able to avert the shutout with a pair of fourth quarter touchdowns.

“I’m proud of these guys. They overachieved this year,” said Trinity Head Coach Rob Cathcart, whose team finished at 8-2, including a 33-8 win over Campbell in the semifinals. “We’re loaded with a lot of young players, so they came together pretty well. They had as good a season as they probably could have.” 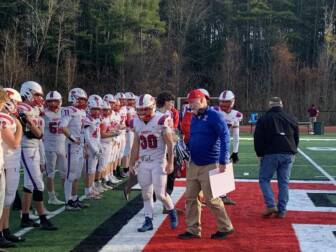 Pelham (10-0) put together one of the most dominant seasons in New Hampshire high school football history. The Pythons, a team many observers believe should be elevated to Division II, outscored their opponents, 490-55 and scored at least 50 points five times. Trinity was the only team to score in double digits against them.

Junior quarterback Jake Travis had an outstanding game for Pelham on Saturday, rushing for 124 yards and three touchdowns and throwing for another score. His 11-yard touchdown pass to senior Kevin Bodenrader on their opening possession staked the Pythons to an early 7-0 lead.

On Pelham’s next possession, a 40-yard run by Travis sparked a 75-yard touchdown drive, capped by Travis’ 9-yard TD run to make it 14-0 after one quarter. 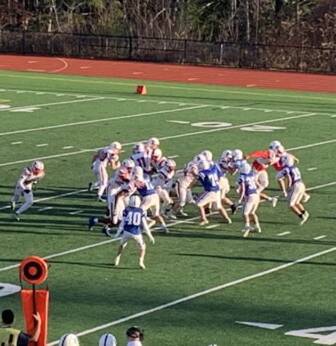 Trinity, looking to win their second state title in three years, tried to rally back on its third possession. Starting from their own 20, the Pioneers marched into Pelham territory with sophomore quarterback Jack Service and senior halfback Jimbo Thibault carrying the load on the ground. Trinity got as far as the Pelham 35, early in the second quarter, before the Pythons stiffened and forced an incomplete pass by Service on 4th and 3.

What confidence Trinity might have been able to gather from that drive quickly evaporated. Pelham marched 65 yards in 10 plays, with Travis scoring on a sneak from a yard out to make it 21-0.

The Pelham defense and special teams then got into the scoring column. The Pythons forced a three-and-out on Trinity’s next possession. But this time, Bodenrader flew in and blocked the punt, then scooped it up and returned it 25 yards to make it 28-0. 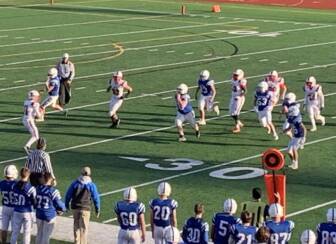 On the ensuing possession, Service attempted a screen pass but in the face of a heavy rush. the ball fluttered up for grabs. Linebacker Ethan Demmons plucked it out of the air and returned it 34 yards for the touchdown. A two-point conversion pass made it 36-0 at halftime.

Things didn’t get any better for Trinity in the third quarter. Pelham took the second half kickoff and marched 54 yards in just four plays, with Travis scoring on a nifty 43-yard keeper. Later in the quarter, sophomore Connor Travis capped the scoring for the Pythons on a 13-yard touchdown run.

Trinity broke the shutout in the fourth quarter on a 10-play, 71-yard scoring drive. DeVohn Ellis did the honors with a 6-yard touchdown run on a sweep around right end.

Later, after stopping Pelham on downs, Trinity got the ball back and Ellis found the end zone again. This time he hauled in an 18-yard touchdown pass from Service. 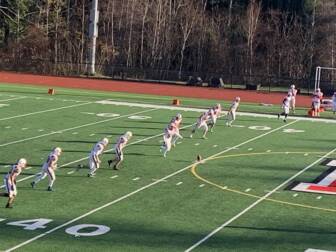