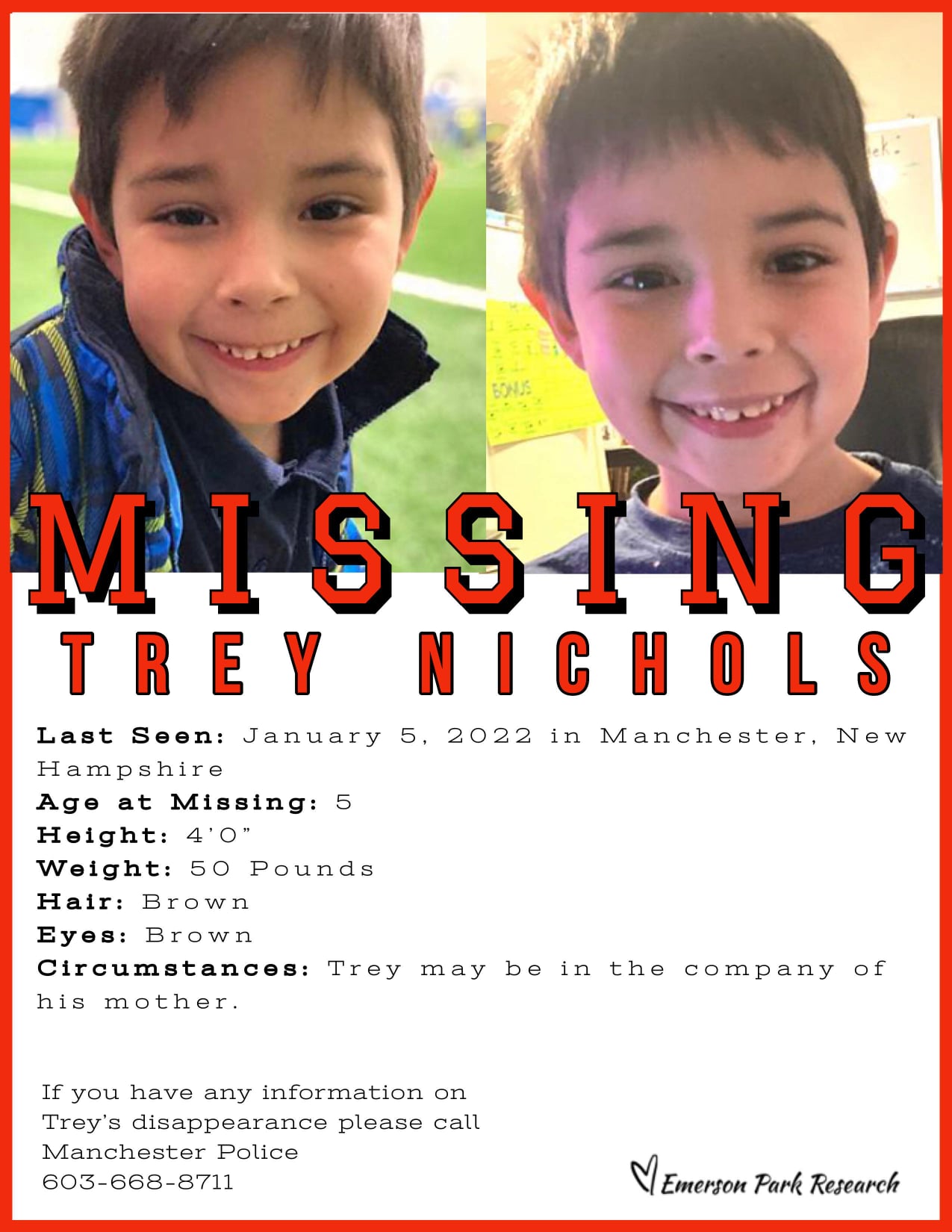 MANCHESTER, NH – Manchester Police are seeking the public’s help in locating a Manchester boy who was last seen Jan. 5, 2022.

Trey Nichols, 5, was reported missing in what police say may be a custody dispute.

“We have been working with DCYF and we have reason to believe the mother left the state with the child prior to DCYF obtaining custody, and now we are working with them and several other agencies to try to locate them both,” Manchester Police Information Officer Heather Hamel confirmed on Sunday.

A poster featuring Trey Nichols has been circulating across social media groups focused on locating missing children, and is featured on the National Center for Missing and Exploited Children website.

The news comes at a time when attention has been hyper-focused on another high-profile case here, the whereabouts of Harmony Montgomery, who was last verified by police to be in Manchester in September of 2019 during a police call to the home where she was living with her father, Adam Montgomery, and step-mother, Kayla Montgomery. She was 5 at the time.

Publicity around that case has garnered international attention, due in part to the unusual circumstances around that case: the two-year gap between when she was last seen and when police became involved in the search.

Both Adam and Kayla Montgomery remain in custody following their separate arrests – Adam Montgomery is facing assault and child-endangerment charges connected to a report by a family member that he abused Harmony and blackened her eye in the summer of 2019. Kayla Montgomery is charged with theft by deception and Welfare fraud, accused of collecting food stamps designated for Harmony even though Harmony was no longer in her care.

Adam Montgomery has claimed that he returned Harmony to the custody of her mother, Crystal Sorey, in November of 2019. Harmony was placed in Adam Montgomery’s care February 22, 2019, after Sorey lost custody of Harmony in July of 2018 in a Massachusetts courtroom due to ongoing addiction issues.

On Jan. 14 police issued an update on a reward fund for information leading to Harmony’s whereabouts.

“An anonymous donor from Washington state has pledged $25,000. This brings the total reward to $137,000.  We are overwhelmed by the generosity and are so appreciative. We would like to thank the Manchester community, local businesses, private citizens and those from around the state and country who have reached out in support. Manchester Police continue to investigate and encourage anyone with information to please come forward. The dedicated tipline is 603-203-6060.”

Police have not yet issued further public information, including the name of Trey Nichols’ mother, a description or photo, or what kind of car she may be driving.

We’ll bring you more information as it becomes available.

Anyone with information about Trey Nichols should contact Manchester Police at 603-668-8711, or you can leave an anonymous tip at Manchester Crimeline which offers up to $2,500 in reward money for information that leads to an arrest.