MANCHESTER, NH – Police are investigating two robberies in the past week involving pedestrians in the downtown area. Police said the crimes, although similar, do not appear to be related.

On June 19, 2021, Manchester Police received a report of a robbery that occurred in the Citizen’s Bank Parking Garage located on Londonderry Lane between Hanover and Manchester streets.

The victim told police that at 10 p.m. as she was getting into her car a man who was unknown to her assaulted her and demanded her wallet. She gave him her purse and he fled the area on foot.

The man is described as white, of average height, thinner build, freckled arms, with a reddish/brown beard. He was last seen wearing a black backward baseball hat and black tank top.

This is a second strong-arm robbery in that area in a week’s time. 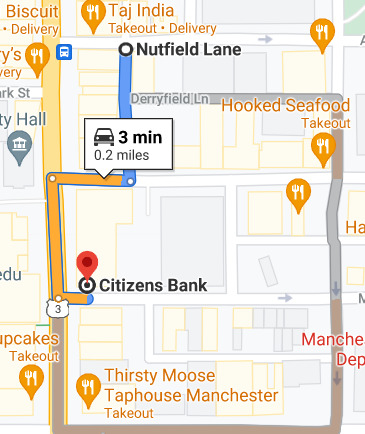 On June 15, 2021, around 10:30 p.m., a woman walking to the Citizen’s Bank Parking Garage was robbed by an unknown man. She reported that the man initially bumped into her and apologized. She then crossed the street at Nutfield Lane and the same male approached her again from behind and grabbed her purse. He fled the area on foot.

The man was described as white, approximately 40-50 years old, with salt and pepper hair, wearing blue jeans and a black coat with orange stripes on the sleeve.

The crimes are similar in nature, but they do not appear to be connected.

“As part of our CompStat360 initiative, we are releasing this information to keep the public informed and up to date regarding crimes of concern in Manchester,” says Chief Allen Aldenberg.  “Our Officers and Detectives are working to identify and apprehend these individuals.  This summer, MPD has dedicated more resources to the downtown area and we will continue providing a high level of presence in the downtown area with foot, bicycle, and vehicle patrols.  We also encourage residents and visitors to report suspicious activity to the police department and, as always, take common-sense personal safety measures.”

“Over the past three years, we’ve worked to add more officers to the Manchester Police Department and have allocated more resources to the downtown area through community policing and traffic enforcement,” said Mayor Joyce Craig. “I appreciate the hard work and data-driven approach of the MPD and encourage anyone who sees anything concerning to report the issue to the police department.”