MANCHESTER, NH – Manchester Police Detective Peter Flanagan was working a paid detail at the Elliot Hospital when a man entered the main entrance to the hospital suffering from a stab wound. The victim, 20, was applying pressure to his own stomach, and accompanied by his wife. 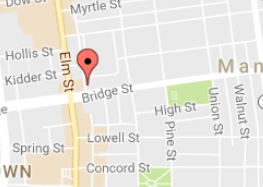 The victim’s wife translated for her husband who only speaks and understands Spanish. His wife stated he was in the area of Complete Labor, 20 Bridge St., at approximately 7 a.m. on Jan. 3 while talking on his cell phone. Her husband said two men approached him and started to speak to him, but he was unable to understand what they were saying due to the fact he does not speak English. They took his Galaxy 7 cell phone immediately after stabbing him in the stomach.

Please contact the Manchester Police Detective Unit at 603-792-5500 or go online to leave an anonymous tip via Manchester Police Crimeline. You can also call 603-624-4040 if you have any information related to this case. You may leave an anonymous tip, but still be eligible for a cash reward should your crime tip lead to the identification and arrest of the individuals responsible. The victim sustained a non-life threatening, single stab wound to his stomach.