Anyone who has information about Harmony’s whereabouts is asked to call the Manchester Police Department at 603-668-8711 or Detective Jack Dunleavy at (603) 792-5561. You can also remain anonymous and leave a tip via Manchester Crimeline or by calling 603-624-4040.

MANCHESTER, NH – An intensive search is on for a local child last confirmed seen in Manchester in October of 2019.

“I’m imploring, I’m asking, I’ll go so far as I’m begging the community, I don’t care if you saw this young girl a year ago and think it’s irrelevant, call us,” Manchester Police Chief Allen Aldenberg said during a news conference on Friday at police headquarters (watch the full news conference below).

Aldenberg said he called the New Year’s Eve news conference “in hope of drawing greater attention” to the case, which Aldenberg characterized as highly unusual. His officers and detectives are working with the NH Division for Children, Youth, and Family Services, and the National Center for Exploited and Missing Children for leads. The news that the child was missing was first made public Friday just before 2 p.m.

He said despite speaking to family members, concerns for the safety of the child, Harmony Montgomery, 7, prompted the news conference. Questions about why a two-year gap between when the child was last reportedly seen and being reported missing are fair questions, Aldenberg said, and ones they are still seeking answers for.

“We’re working nonstop around the clock,” with all available resources to locate the child. There has been no Amber Alert issued, which would trigger a broad electronic awareness campaign, because police are lacking enough concrete information to meet the threshhold for an Amber Alert; they don’t have the name of an adult the child might be with, or a description of a vehicle she might be traveling in. “I’m being as honest as I can with you. I don’t have that information right now,” adding that the moment police became aware of the situation they launched an all-out effort to find Harmony.

“She was last seen at a residence in Manchester,” Aldenberg said, declining to provide more specifics during an active investigation. He said that there was contact with the child’s family that included the her whereabouts in October 2019, the result of a call for police service at a city residence. This week’s investigation was triggered by a combination of family and DCYF involvement, Aldenberg confirmed, but he declined to elaborate further.

“I’m not saying she wasn’t seen someplace else after that, but that was the last time she was seen in the city of Manchester,” he said.

When asked what area of the city his officers were searching, Aldenberg said, “We’re searching everywhere.”

He called the investigation “very active,” and acknowledged there are many questions yet to be answered, which is why he has made the case public. Aldenberg said Harmony was not enrolled in a Manchester school but was last known to be enrolled in some kind of educational program in Massachusetts. He declined to elaborate on which family members came forward earlier this week to report the child missing, or whether they are in contact with the child’s parents. He said he was not prepared to comment on whether there were custody issues involving Harmony.

He acknowledged that the two-year gap in information is highly unusual and is why the police are pouring all available resources into locating the child. “For us to have a two-year delay, that’s concerning. It’s not something that happens on a regular basis. We have a two-year window we’re trying to shrink as much as humanly possible as fast as we can.”

He said just before the news conference he stepped out of the room to field a call about the case. He instructed all personnel during the 4-12 roll call that if any tips or phone calls are made by the public or come in by phone they should immediately be connected to a detective. He could not say whether tips had come in since they first issued a news release early Friday afternoon.

“My hope is that people are calling and if it is hey we think we see her here, then we’ll go to wherever that is,” Aldenberg said. 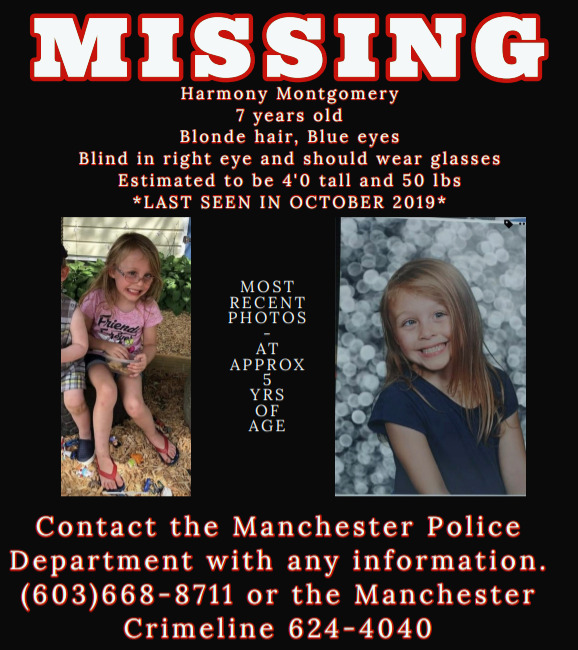