In honor of National Poetry Month, this year’s festivities will center around the art of poetry through the spoken word, dance, music and live painting!

Tickets are now on sale on cityartsnashua.org and table sponsorships are also welcomed. Information and marketing benefits for businesses and organizations who want to participate is also on the website.

The entertainment line-up, which is kid-friendly, will include:

This year’s Arts Awards honorees have been named:

Arts Hero Arts Award Winner: Brian McCarthy. A Nashua Alderman for years,Brian was a longtime supporter and mentor for City Arts Nashua and a champion for the arts and culture in the Nashua schools and community.  Brian’s support, in particular, for the planned Nashua Performing Arts Center was well known. City Arts Nashua is honoring his memory and work.

Individual Arts Award Winner: Meghan Durden. Meghan is the Nashua School District, K-5 Art District Coordinator. She is being honored for her outstanding commitment to and participation in the Gallery at the Wall project in Downtown Nashua as a committee participant, working with and communicating with fellow teachers across the entire Nashua School District, collecting the vast array of art and running the Selection Night when judging took place. She also worked closely with the Nashua Telegraphnewspaper on the student recognitions.

Small Business Arts Award Winner: Stella Blu. Open since 2008, this tapas restaurant has had a long-standing commitment to downtown Nashua, and a tradition of philanthropy and community involvement in myriad ways, in particular for the arts.  They feature a rotating gallery of local artwork in their restaurant, regularly schedule live music and entertainment at the restaurant, and are a vocal supporter of downtown initiatives that support the arts, including the Performing Arts Center. They have donated generously of their time, talent, and “treasure” for countless projects and organizations, including a mixology (cocktail making) night event for City Arts Nashua’s live auction at last year’s luncheon, and are an unofficial home of City Arts Nashua’s many committee meetings.

Large Business Arts Award Winner: Southern New Hampshire Medical Center. Led by Michael Rose and Betsy Houde, they run an outstanding program titled “The Art of Hope” which features local artists who create uplifting and hopeful works of art to inspire and encourage patients and visitors in the Behavioral Health Unit of Southern New Hampshire Medical Center in downtown Nashua. SNHMC is recognizing art as part of their pursuit of improving the health of the community. Mike and Betsy assembled a very talented group of artists, placed their work on prominent display and helped promote the artists and the “Art of Hope” program through events and on the hospital’s website. 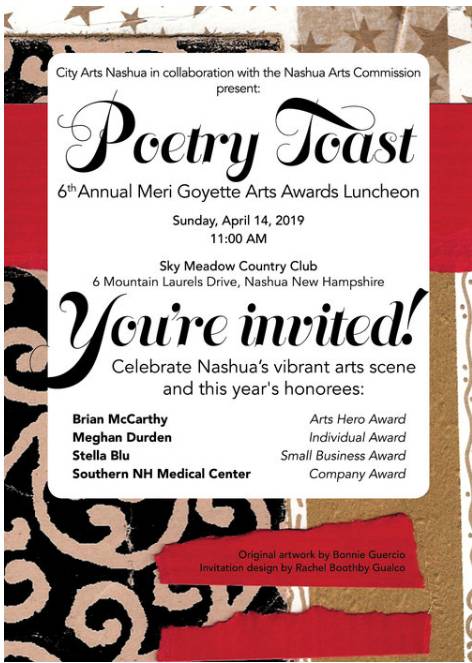 City Arts Nashua was formed in 2004 and is an all-volunteer-run arts services organization with a 501(c)3 IRS non-profit designation. Its mission is to enrich the Nashua area’s quality of life by providing leadership to support and strengthen arts and culture. City Arts Nashua helps expand and provide visibility for greater Nashua’s artistic and cultural community. It promotes, advocates, networks, produces events and projects, fundraises, and provides fiscal sponsorships. In addition, City Arts Nashua works closely with the Nashua Arts Commission, with local arts individuals and groups, community organizations, business, government and with state and national arts organizations. City Arts Nashua produces ArtWalk, Nashua’s most celebrated art event every fall, now celebrating its 15th year, and the Meri Goyette Art Awards and Luncheon, recognizing contributions to the arts of non-artist community members, now in its 6th year. City Arts Nashua successfully led the effort to restore three important murals in Nashua, including, in 2016 Margaret’s View of Nashua by renowned artist Lucienne Bloch; in 2013, Vivian’s Dream, by Nashua mural artist Barbara Andrews; and, in 2015, the Yankee Flyer Diner by Nashua native and former Artist Laureate of New Hampshire, James Aponovich. In addition, City Arts Nashua is the fiscal agent for the proposed Nashua Performing Arts Center, and served as the fiscal sponsor of  the Nashua International Sculpture Symposium, for 11 years, the only such international sculpture symposium in the United States.