Inoculation rates in 18 communities – with a combined population greater than 30,000 – hover at 35 percent or less as of June 23, according to state Department of Health and Human Services data.

This information has limitations, according to DHHS spokesman Jake Leon. For example, Durham’s vaccination rate of 29 percent could be inaccurate if University of New Hampshire students listed their home address rather than their school address when they got the shot.

Still, the low rates of vaccination are a cause for concern. State and federal health officials from Dr. Anthony Fauci on down say those without vaccinations comprise nearly all new cases.

Gov. Chris Sununu addressed the issue in a news conference Thursday, encouraging those without vaccinations to get one.

“The surge that we talk about that is likely to come in the fall, the vast majority, my guess is 99% of that, is going to be of the unvaccinated,” he said.

Leon said there is likely to be a surge in COVID-19 cases in the fall and winter because that is when respiratory illnesses are most common.

“The best thing people can do to protect themselves is to get vaccinated,” he said. 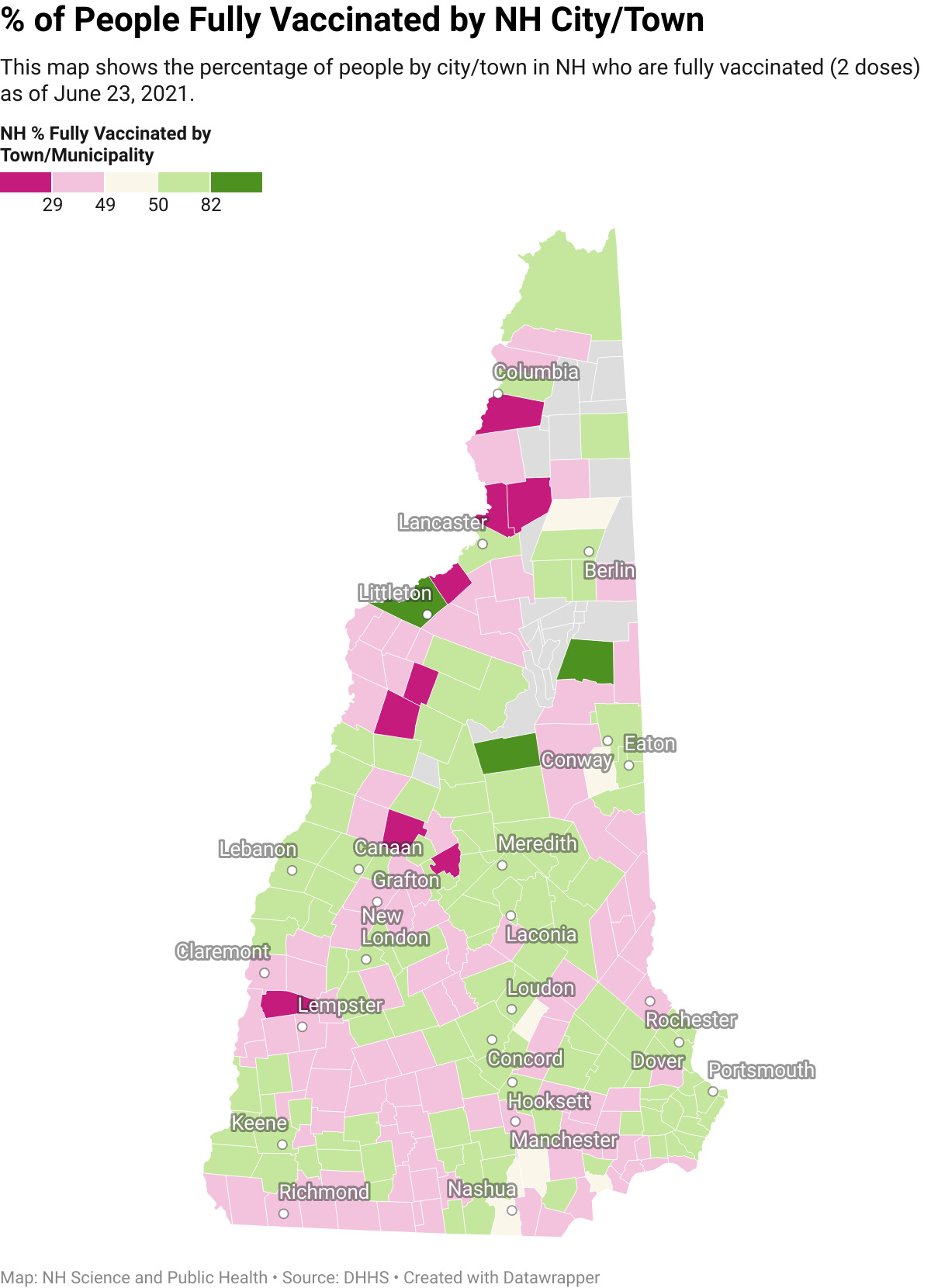 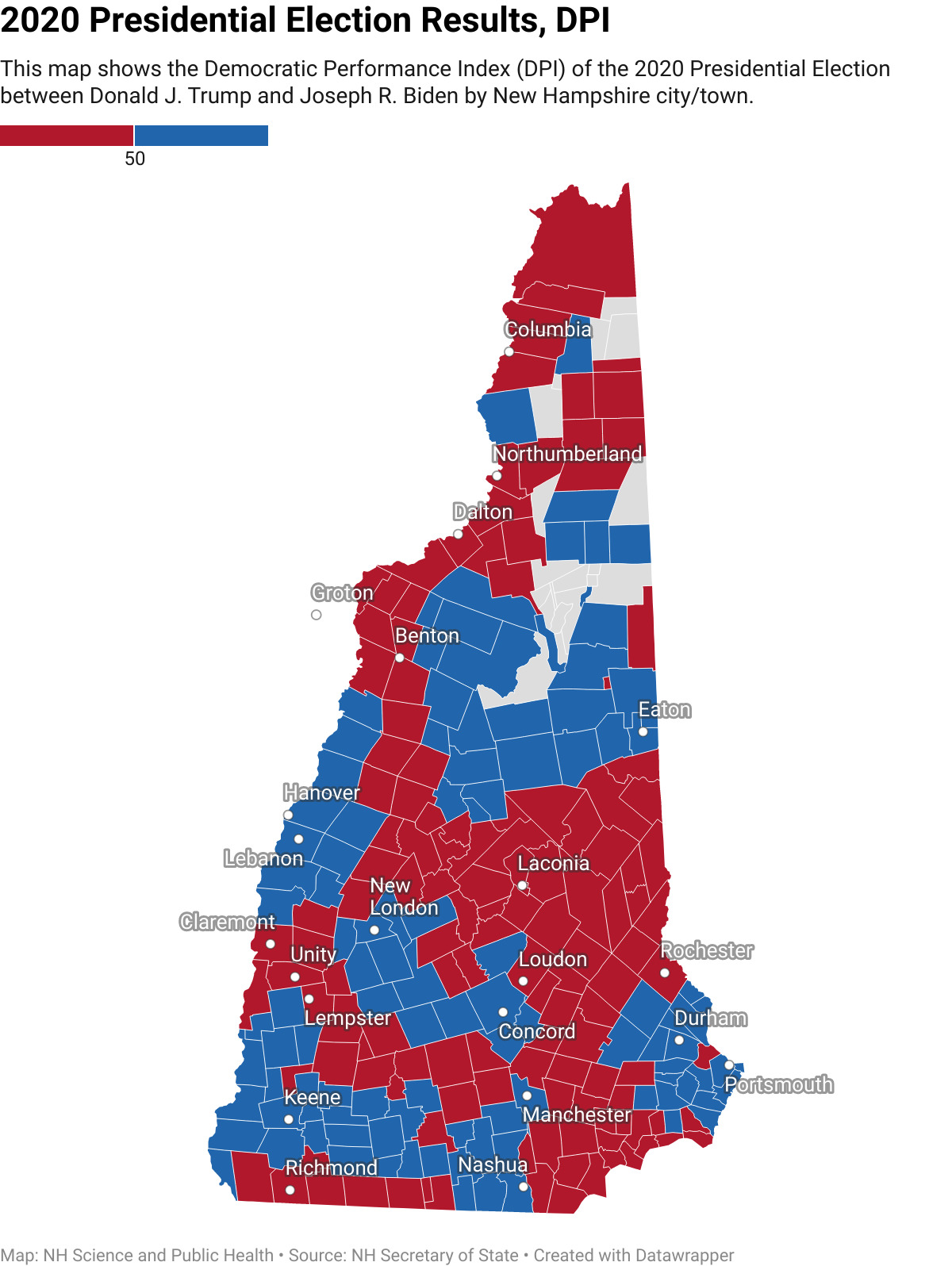 Despite the low inoculation rates in some communities, the Granite State’s vaccine rollout is considered successful. New Hampshire has vaccinated more than 55% of residents against COVID-19, according to the state’s dashboard, compared to 48.8% of people nationally.

However, both public health officials and advocates want to boost vaccination rates before a possible fall surge in cases.

To encourage inoculation, the state started a mobile service to provide free shots.

More than 100 requests have been made for the mobile clinic, according to Dr. Beth Daly, chief of infectious disease control at DHHS.

The service has been in use for a week, visiting five places and vaccinating 50 people.

But availability is only one factor in why people do or don’t get the shot, according to health care experts.

“Ultimately, the decision to get vaccinated comes down to personal choice,” Leon said

.Part of that reasoning could also come from politics.

In the last general election, former President Donald Trump carried eight of the nine towns with the lowest vaccination rates.

According to a U.N.H. Survey Center poll, Trump voters were ﬁve times more likely to say they don’t plan to get vaccinated than Biden voters.

Environmental consultant Mindi Messmer – co-founder of the nonprofit N.H. Science and Public Health, which educates about disease prevention – agreed that politics might play a role.

“While our work shows that political identity at the town-level is an important factor in vaccination rates, our results also suggest there are other important factors – perhaps sex, social influence, education, risk perception, or access – that influence vaccine hesitancy,” said Messmer, a former Democratic candidate for office.

She added that access to vaccinations and messaging from trusted sources across political ideologies could improve vaccination rates.

“Initial efforts should be targeted on improving access in communities where vaccination rates are low but where access to healthcare has historically been limited,” she said, referring to remote parts of the state where residents have to drive far for healthcare.

If vaccination rates don’t improve, advocates are concerned about what the fall will look like in New Hampshire.

“Younger children … will likely not be able to receive a vaccination before school starts in the fall of 2021,” said Nora Traviss, a Keene State College professor who co-founded N.H. Science and Public Health.

“We must take precautions, which include improving vaccination rates in rural areas, to allow children to stay in school safely and to protect them from infection since the impacts of long COVID are poorly understood.”

Long COVID refers to ongoing side-effects or systems for those who’ve had COVID-19, according to the C.D.C. Lasting effects can include fatigue, joint pain and shortness of breath.

Rick Green is a former Associated Press news editor, local editor for The Oklahoman and reporter/editor for The Laconia Daily Sun.