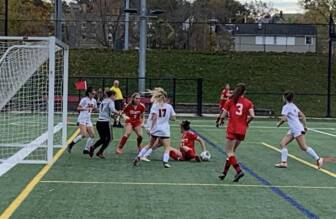 The Trinity High girls soccer team may be unbeaten but Coach Mike Martinez will be the first one to admit his Pioneers are far from perfect.

Finishing plays in the attack zone has been a challenge all season for Trinity, who have scored more than two goals in just four of its 18 games this season.

The struggle to put the ball in the back of the net almost jumped up to bite the 2nd-seeded Pioneers on Sunday, in their Division III State Quarterfinal against 10th-seeded Belmont at Derryfield Park. In the end, they needed an exceptional effort from their defense and a goal in the 50th minute from captain Lexi Spradling to escape with a 1-0 win. 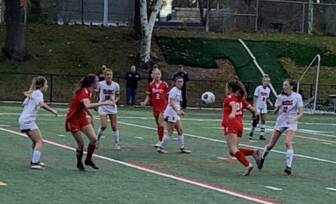 “A lot closer than I would have liked but that’s kind of been the story all season,” said Martinez. “We do great for the defensive third (of the field) and the middle third. It’s the attacking third that we struggle in, just finishing off those chances.”

The shutout was Trinity’s 12th of the season. The Pioneers have allowed just six goals in 18 games and have not allowed more than one goal in any game. 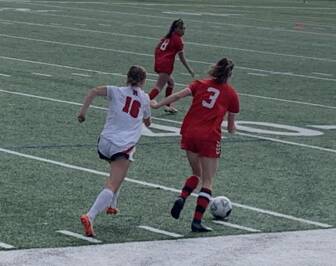 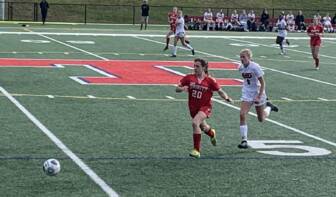 STA is also an exceptional defensive team, having recorded 14 shutouts with just 10 goals allowed all season. The teams met once during the regular season, back on Sept. 8, with the Pioneers claiming a 3-1 victory.

Against Belmont (8-9-0), Trinity was dominant everywhere but the scoreboard. The Pioneers held a 20-2 edge in shots on goal, 9-0 on corner kicks and kept the Red Raiders pinned in their half of the field for extended periods. Senior captain Skyler De Petrillo and junior Devan Booth helped Trinity own the midfield area and created multiple scoring opportunities with outstanding corner kicks. 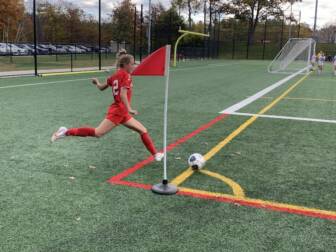 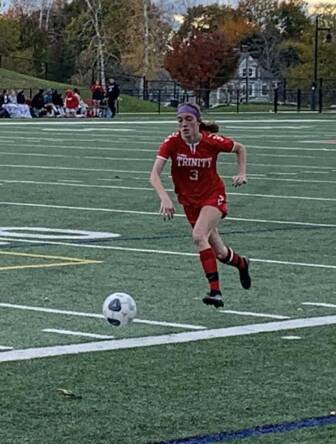 When Belmont did manage to transition into the attack zone, the Red Raider forwards were smothered by a young but extremely talented Trinity defense. Sophomore sweeper Ava Houde repeated blocked lead passes and drilled the ball back across midfield. Freshman Maggie Berleth used her speed to play sideline to sideline and twice chased down Red Raider attackers that tried to sneak behind the defense.

Sophomore Bella Skoglund, senior Sarah Bradley and De Petrillo marked tightly and refused to allow the Raiders clean shots in the box. All of which made for an easy afternoon for keeper Kayla Sisson (2 saves).

“We’re a ‘defense first’ team,” said Martinez. “Our team is built around our sweeper, Ava, our back, Bella, our other back, who also moonlights as a defensive midfielder, wherever (the opponent’s) best player is, Sarah Bradley. And then Skyler and Devan kind of run the show.” 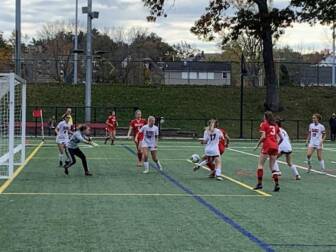 After coming out sluggishly over the first 15 minutes of the game, Trinity began to assert itself. Despite playing with a steady wind in their face, the Pioneers moved the ball crisply and peppered Belmont keeper Brooklyn Matthews with eight shots in the first half. Matthews stopped Trinity’s best scoring chance of the half with a diving save on a direct kick by De Petrillo from about 25 yards out.

In the second half, with the wind at their back, the Pioneers ramped up the pressure even more. Trinity attackers buzzed the net, forcing the scrambling Red Raiders defense to do whatever they could to clear the ball from in front of Matthews. The pressure resulted in six corners for the Pioneers, including one by Booth that nearly went in for a goal, curling off the post.

Nearly 10 minutes into the half, a corner by De Petrillo led to the game’s only goal. The left-footed De Petrillo curled the ball from the right corner to about five yards in front of the Belmont net. The ball bounced once and Spradling, who came charging in, deflected it with her body and past Matthews for the score.

That was all the offense the Pioneers could muster but, thanks to an iron-clad defense, it was all they would need.

Belmont’s best scoring bid came with under five minutes to play. But the direct kick by sophomore Darci Stone from about 20 yards sailed harmlessly over the crossbar.