Above the NH Audubon “Peregrine Cam” atop the Brady Sullivan is popular among virtual bird-watchers.

MANCHESTER, NH – As the breeding season for peregrine falcons kicks off this year, folks from all over the world are starting to tune into the live peregrine falcon feed of the Brady Sullivan tower nest.

This year marks the 40th anniversary of peregrine’s return to the Granite State as part of a concerted conservation effort and the 21st breeding season for the famous Manchester pair.

While the cast has changed a couple of times over the years, the show has continued uncancelled for two decades.

Raptor biologist Chris Martin at the New Hampshire Audubon said the Manchester breeding pair has successfully produced and fledged offspring in the Queen City each consecutive year since 2001.

“What’s interesting is all but one of those … occurred on the Brady Sullivan building in the same nest box each year,” Martin said.

One year, the pair hid from the limelight when they chose to nest in a decorative balcony in front of a ninth-floor window at the then-vacant Citizen Bank highrise on Elm Street.

Martin said it’s noteworthy that the pair are the only known peregrines in New Hampshire, and possibly in most of northern New England, who have successfully produced young without missing a year over that period.

He estimates about 50 percent of the young fledged from the Brady Sullivan nest, all of which have been banded, have survived to adulthood.

Martin said 61 chicks (or eyasses) have been hatched and left the Manchester nest with an ID band over the years. Of that, there have been sightings, dead or alive, of 29, one as far away as New Jersey by the Hudson River.

The oldest peregrines in the region have been known to live about 19 years, but most have shorter life spans.

“If you’re a peregrine falcon and you live through your first year or two, you’re likely to live a decade or more,” Martin said.

The current couple mating in the Brady Sullivan nest are each unbanded and estimated to be about 8 years old, Martin said.

The original couple from 2001 were each banded; a male born in 2000 at the Cathedral Lodge rockface in North Conway, and a female born in 1999 in New York City.

That female disappeared and was presumed dead in 2005 and she was replaced the following year by another banded female born in 2005 in Worcester, Mass.

In 2014, the original male died during the breeding season and was replaced by a one-year-old young buck within 48 hours, who is still there today. Though the Worcester female had already laid a clutch of eggs with the previous mate, she mated again with the new male and laid a second clutch in the same season, Martin said.

“So it was a whirlwind courtship,” he said.

That female was lost later the same year and was replaced by the current unbanded female.

Martin said there are a number of features about this particular location that likely makes whoever is mating there more successful.

At the top of a 13-story building, it’s safe from predators, the box is well sheltered from driving rain and snow, and the birds can protect themselves from the cold wind by going to any of the other sides of the building.

Because of these benefits, the pair sticks around all winter, hunting collaboratively in a city well-populated by the mid-sized birds they tend to eat; starlings, pigeons and house sparrows.

Pairs at other known nests, particularly in northern rural areas like Lyme or Dixville Notch, will often part ways for the winter — peregrines migrate individually — to find more hospitable places to live and hunt, and then return in the spring to breed again. Martin said this reduces their success likelihood since they can’t hunt collaboratively when they split up.

Over the past 40 years, the peregrine population has grown slowly but steadily. Martin said in 2020, there were 24 breeding pairs in New Hampshire, of which 16 successfully produced at least one offspring, and a total of 36 chicks fledged.

In 1980 there were none. The first successful mating pair recorded in decades appeared in 1981 in Franconia Notch.

Lately, Martin has noticed an increased willingness among local peregrines to nest in manmade structures like buildings, bridges, power plant smokestacks and quarries.

And for the past three or four years, the Brady Sullivan nest has not been the only Manchester nesting site. Martin said a second nest was established by a breeding pair beneath the Interstate 293 bridge over the Merrimack River. During a recent renovation of the bridge, the New Hampshire Department of Transportation installed a nest tray with gravel, according to Martin.

Over the years, the live video feed of the Brady Sullivan nest has been managed by a team of technicians, including Bret Clark, at a local tech company that has evolved since the start.

Martin said the company began as Spectra Access, and through acquisitions later became Single Digits, then Genuity Networks. More recently, it spun off has been rebranded as Peregrine Networks.

Indeed, the past 40 years have been an education for the scientific community as well, Martin said. 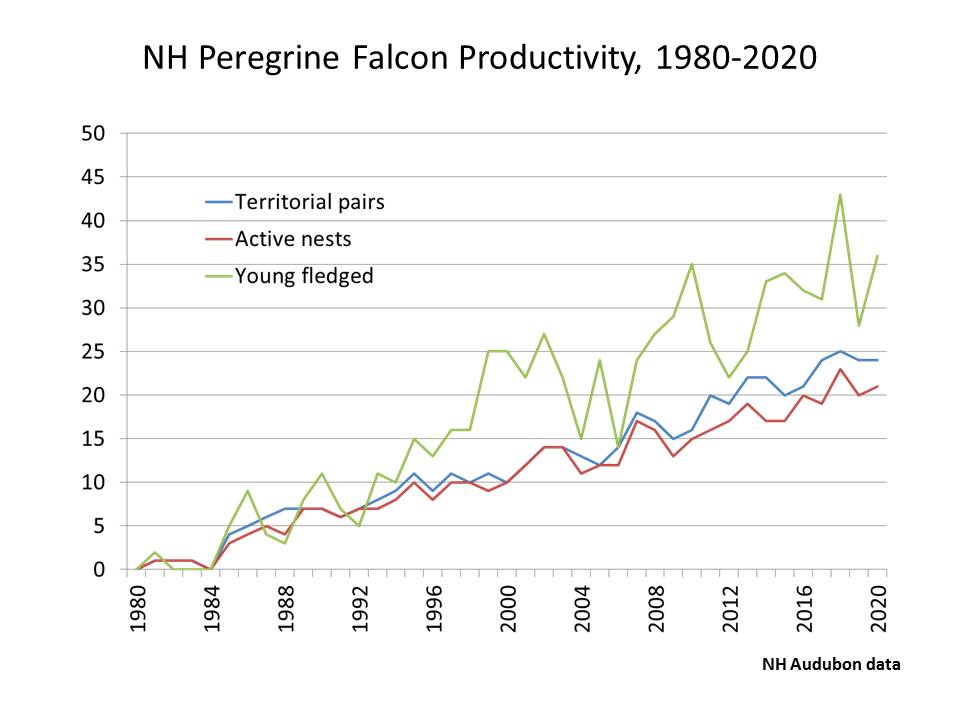 Biologists are not only able to observe the birds’ behavior in the nests virtually, they have also conducted studies that tracked them using satellite GPS. For example, one New Hampshire peregrine female was observed migrating 350 miles from her breeding nest to the same winter nest in southeastern Pennsylvania each year.

They are creatures of habit. Martin said if they ever decide to pick a new nest, that’s the exception to the rule.

Some studies are also tracking some troubling trends, such as the increase of certain industrial chemicals in the bird’s biology. Scientists are currently concerned about a type of chemical called PBDE (polybrominated diphenyl ethers), which has manifested in the form of elevated bromine levels in the tissue of unhatched fetuses, according to a 2009 study that included 60 eggs from New Hampshire.

Martin said no one is sure what the long-term effects of the chemical might be, but biologists have cause to be concerned.

In the past, chemicals like DDTs were responsible for decimating the country’s raptor population. And its prohibition has been partly credited for the rebound of many once-endangered species such as the bald eagle.