About this series: A narrative exploring the stories behind the paintings of late artist Herbert Mandel as explained in the context of the Biblical texts they’re derived from, by his son-in-law, Jim Robidoux.

READ ⇒ Part 1: Noah walked with God, built an ark and saved mankind and the animals 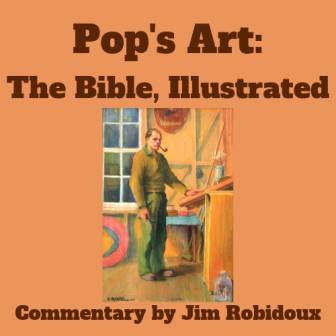 After Noah built the ark God swept away his family and all the animals on it to save them from worldwide destruction. God’s creation was wiped out completely except for those that were on Noah’s Ark. Noah’s family and the animals survived the Great Flood as God planned, after being on the ark for a year.

In the painting “Noah in the Grapes,” by Herb Mandel, another lesser-known story about Noah’s life after the ark as found in Genesis 9:21 is depicted.

After leaving the ark Noah built an altar to Yahweh and sacrificed the animals provided for the event. Noah’s family was finally free of death and destruction and able to leave the ark safely. He like his father and many in his line would be a man of the soil again. Noah planted a vineyard and enjoyed the fruits of his labor until he was found in the grapes.

Noah was the first man to have walked with God since his great-grandfather Enoch, who left the world without having to die. Righteous Enoch was translated by God and taken directly to heaven to enjoy God’s company forever. Like Enoch, righteous Noah did not have to die like everyone else but remained on the earth to restart God’s creation. As in the very beginning, God sent a wind to move and evaporate all of the excess water and create dry land once again.

Noah’s group leaving the ark behind were the lone survivors after God’s wrath and judgment. They would all be alone in the world having only each other and God’s help to restart creation. Yahweh set a beautiful rainbow in the sky and told them His justice was satisfied and His bow was set on its side never to be used again, like the flood to end earth’s creation.

Noah was likely celebrating life and probably suffering survivor’s guilt, after losing so many loved ones. Family, associates and neighbors all gone, along with the animals and so many other living things. His heart must have broken at times, such a time to be alive but also a time of great loss.

And so it was after a night of great merriment mixed of course with much remorse, that Noah was found sleeping in his tent. Drunk, naked he lay uncovered and his youngest son quickly told his brothers of Noah’s foolishness.

More from the “Pop’s Art” archives: