MANCHESTER, NH – The Palace Theatre is set to welcome the public back with the Premiere of The Uptown Boys, described as “the swagger of Jersey Boys meets the iconic songbook of Billy Joel” in one epic night of entertainment. Join The Uptown Boys for this one-of-a-kind concert experience as they tell their personal stories of life, love, and making it in New York City.

It’s a show born of the pandemic with some deep local roots. One of the show’s creator’s John DiSimini, is married to hometown starlet Kaleigh Cronin, who got her start on the Palace stage before making her way to Broadway.

Says DiSimini, “I created this experience with myself and two fellow broadway performers during the pandemic and we are thrilled to be premiering our concert at  The Palace Theatre. It holds a special place in my family’s heart as my wife Kaleigh got her start in musical theatre there,” DiSimini said. “Kaleigh and I have spent much of the pandemic with my in-laws in Manchester.  I actually did the majority of the music work on this project when I was quarantined in the basement of my in-law’s home in the North End after contracting COVID.”

With slick choreography and powerhouse vocals featuring performers from some of Broadway’s biggest hits, The Uptown Boys breathes new life into these musical staples of Americana. The debut production will feature Austin Colby (FROZEN, THE SOUND OF MUSIC), Keith White (A BRONX TALE, JERSEY BOYS), and Wes Hart (WEST SIDE STORY, ANASTASIA, JERSEY BOYS). The Boys will have audiences dancing in their seats as they enjoy Billy Joel’s music exactly as they want to hear it. 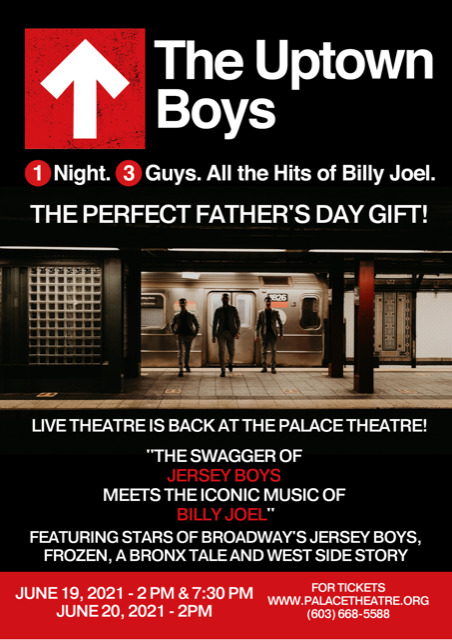