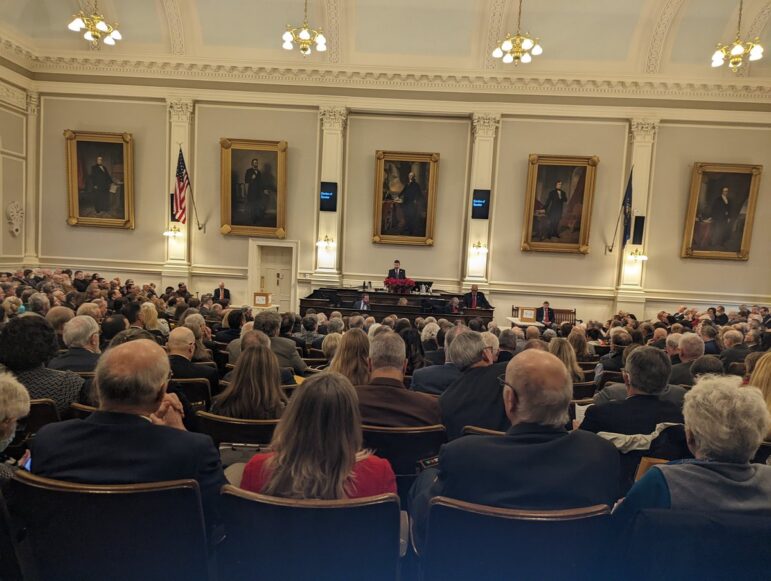 CONCORD, N.H. – The 168th session of the New Hampshire state legislature kicked off on Wednesday as legislators gathered for Organization Day proceedings.

In the race for Speaker of the House of Representatives, incumbent Sherm Packard (R-Londonderry) defeated Matt Wilhelm (D-Manchester), 205-184. Both men spoke to the importance of bipartisanship and unity in their speeches to their fellow state representatives, both on behalf of their constituents and for each other.

“Granite Staters are counting on all of us to reject trench warfare and ideological battles and instead come together and work together to deliver results for our neighbors,” said Wilhelm. “We can do better and we must do better.”

“We need to look each other in the eye and show each other respect and dignity and honor our fellow legislators and act in ways that honor our constituents and this great institution,” said Packard. “I believe with tolerance and respect, we can work together right here in this historic chamber, in our committee business, in our debates and in our interactions over the course of the term.”

Several Democratic State Representatives-elect were not in attendance, such as Mary Hakken-Phillips of Hanover, who contracted COVID-19 prior to Wednesday’s session and Stacie Laughton of Nashua, who faces stalking charges. Wilhelm and several other Democratic officials called for Laughton’s resignation on Wednesday morning.

With the House divided 200-199 however, several Democrats did defect to vote for Packard, although the vote was cast in a secret ballot.

Wilhelm did get a win later in the session however when House Resolution 6 passed by a voice vote. The resolution sought a special election in Rochester Ward 4 to determine the 400th member of the house, with November’s election between Republican David Walker and Democrat Chuck Grassie ending in a tie.

Ross Berry (R-Manchester) made a motion to table House Resolution 6, believing that Rochester voters would prefer to postpone any special election until after the holiday season. Wilhelm responded that while the House has the right to seat its own members, tradition dictates a special election in the case of a tie vote and any other action would be a direct attack on the voters of Rochester.

In the only other contested decision of the state, incumbent David Scanlan defeated former State Senator Melanie Levesque (D-Brookline) to become New Hampshire Secretary of State. In a joint vote of the New Hampshire House and Senate, Scanlan received 237 votes, with Levesque getting 175 and one legislator writing in an unknown candidate.

“I am grateful for the support I received from so many members of the New Hampshire House and Senate. I ran because I believe our Secretary of State’s office can and should do more to protect access to the ballot for New Hampshire voters, so we do not remain the hardest state to cast a ballot in the country. Even though we did not win, I will continue to use my platform to advocate for pro-voter policies,” said Levesque. “Congratulations to Secretary of State Scanlan, I’ve always respected his diligent service to this office. As he begins his first full term as Secretary of State, my hope is that he makes needed improvements to our election system that benefit all Granite Staters.”

A full thread of the day’s events can be found here.