It’s May 10, here’s the state of things right now for the New Hampshire Fisher Cats and next step on the path to the big leagues to ….wherever it is the Toronto Blue Jays are playing right now. 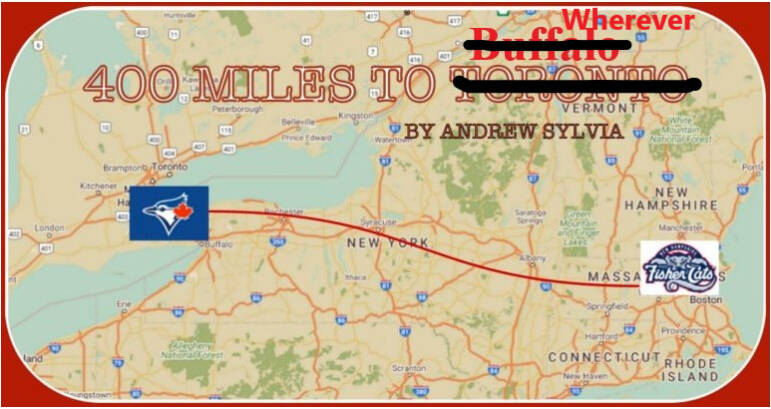 So, before going forward, perhaps it’s appropriate to provide an explanation of this column’s title “400 Miles to Toronto.” Manchester is about 500 miles away from Toronto, but about 400 miles away from Buffalo, New York; home of the Triple-A Buffalo Bisons, the next step on the road to the big leagues for Fisher Cat players.

However, last year the Blue Jays played at Sahlen Field in Buffalo, home of the Bisons, since the Canadian border with the U.S. has largely been closed due to the pandemic. And they will play there again in June, but for now the Blue Jays are playing in Dunedin, Florida at TD Ballpark, their Spring Training home and home to one of their minor league affiliates, the Dunedin Blue Jays.

And the Bisons are playing in Trenton, New Jersey…

So, bear with us until the pandemic ends and it’s clear what the geographic target is for these guys.

Every series this year will be six games, which was about five games too long of the Fisher Cats this week. New Hampshire ended the series with 10 errors (second worst in the Double-A Northeast in the season’s first week, only Harrisburg was worse), but other than that there was no real theme to the week other than the losses.

Offensively, perhaps the biggest thing to look for is to see if the Fisher Cats can improve with when there are runners in scoring position after horrible performances on Sunday (4-for-19), Friday (2-for-17) and Thursday (3-for-19 over the doubleheader).

On the mound, perhaps the lone bright spot came from presumptive staff ace Zach Logue. The five runs on Sunday came off two swings of the bat, one of those swings was from Johan Mieses, who went deep three other times over the series.

Outside of those moments, he struck out eight Sea Dogs, throwing 60 of his 87 pitches for strikes and allowing just two other hits over 4 2/3 innings. His appearance on Tuesday was the only time in the series where any Fisher Cat starter lasted a full five innings, striking out five against four hits and a walk.

Outfielder – Brock Lundquist: Returning to Manchester for another season as a Fisher Cat, the 25-year-old has New Hampshire’s only home run of the week and lead the team in slugging percentage (.636), OPS (1.103)

Bullpen – Brody Rodning: There weren’t any saves for the Fisher Cats this week, but Rodning put in quality work in middle relief. In appearances in Tuesday and Saturday he pitched a combined four innings, striking out five overall versus three hits and two walks allowed.

Nashua Pride fans will be familiar with the Fisher Cats’ next opponent from their time in the Atlantic League: the Somerset Patriots. Based in central New Jersey, the Patriots replaced the Trenton Thunder over the off-season as the New York Yankees’ new Double-A affiliate.

The first five games of the season are set to start at 6:35 p.m, with the series finale on Sunday beginning at 1:35 p.m.