Manchester Moves is grateful for the City’s pursuit of federal grant money to improve the City’s road and transportation infrastructure. This is evidenced by our letter of recommendation for the RAISE grant in June of 2021. Congratulations to you and your team for doing the hard work to win this competitive grant after two unsuccessful attempts. We are writing to you today on behalf of Manchester Moves to formally share our concerns about the initial design along with thoughtful and practical alternatives.

The plans that were presented publicly on December 7, 2022 by the City’s consultant, Fuss & O’Neill look like they will result in less traffic congestion and more fluid movement of automobiles. More vehicular traffic, moving faster, on South Elm Street isn’t good news if you get through the zone on foot or bicycle. As a result of the anticipated increases in volume and speeds of trucks, buses, and automobiles, we think it’s extremely important to safely address the needs of people of all ages and abilities who move around without the aid of an automobile.

While historically, the Queen City has been a “car city,” the City’s updated 2020 Master Plan codifies its collective desire to be more easily accessed through alternative transportation (trains, bikers, walkers, wheelchairs, and scooters). There’s agreement that if our city becomes more bike/pedestrian friendly, people can live here without owning an automobile. Rail Trails are the preferred and safest way for these populations to move around because of the physical barriers between them and vehicles.

Fortunately, the City already has eight miles of Rail Trails and is positioned to become the Rail Trail hub of Northern New England. After 15 years and over $10M in federal and city investment, our rail trails are nearly connected. However, we are concerned that the current plans inadequately address the final last-mile connections to the South Manchester Rail Trail, Piscataquog Rail Trail, and the Rockingham Rail Trail.

Starting this month, the City is breaking ground on two additional miles of the South Manchester Rail Trail (Perimeter Road to Gold Street) and includes the rehabilitation of the Cohas Brook Trestle. Another planned multi-use path will link up the nearly completed Londonderry, Derry, Windham, and Salem rail trails. The towns to our South are eager to use a nearly completed rail trail that is 100 percent removed from vehicular traffic. This is especially exciting for families with children who love riding bikes but could never safely consider riding into the City of Manchester adjacent vehicles while separated by painted lines.

The City’s consultant represents that the current plan is for everyone and has appropriately checked the “rail trail” box by committing to develop the abandoned half-mile section of trail adjacent South Willow St. and Elm Street and creating a five- or six-foot multi-use path adjacent the new auto road down Gas Street to the ballpark. The half-mile of rail trail could be completed with less than $100K in private funds. This is evidenced by the $50,000 our organization used to remove growth and trash in 2021.

Where this trail system needs investment is in its crossing of Queen City Avenue. Attached is a visual of the neighborhood where the South Manchester Rail Trail doesn’t have a way to cross Queen City Avenue along with three options that we commissioned from a Boston-based Urban design architect, Urban Lab Idea. They studied our city, our plans, and this area in-depth in the summer of 2021 and came up with three options to solve this problem. 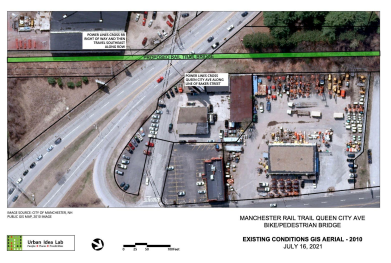 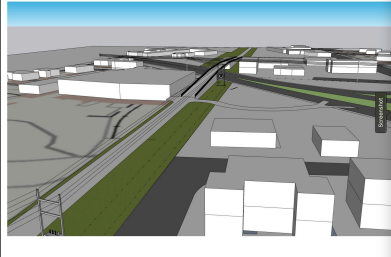 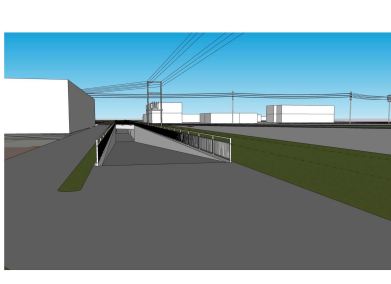 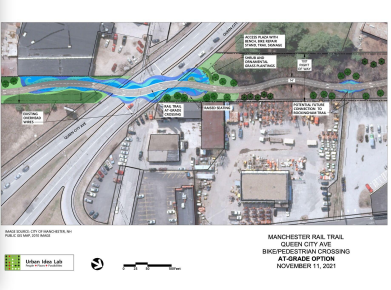 Manchester Moves has been at the forefront of developing and promoting the City’s rail network since 2008, when we commissioned the Rail Trail Master Plan that has been the guiding framework for all of the city’s rail trails. We are close to completing this ambitious project and we are excited that the RAISE grant is positioned to help finance these last-mile connections that will connect Manchester to communities to our South, West, and East.

The vehicular traffic on Queen City Avenue has divided our community for too long. This is a unique opportunity to reconnect South Manchester to downtown Manchester. We know this route intimately well as we ride it almost daily on our bicycles with up to 25 kids. It’s our route to school and it’s also known as the Bike School Bus. Despite our bright orange clothing, lights, and adult chaperones, we have had several “near misses” in the past 12 months with buses from the Manchester Transit Authority (MTA), reckless and distracted drivers, and most recently a driver who overdosed at the wheel and passed out in front of Bakersville School. (November 7, 2022, @ 2:40 p.m.). We are begging you to choose an option that gets these kids, and many others, safely across Queen City Avenue and create a solution that keeps them on the South Manchester Rail Trail as much as possible.

Lastly, we recognize that bridges are expensive and trade-offs will need to be made. One other option we looked at seriously was a path under Granite Street. In this way, it could be used by both bicycles and walkers and it would be much cheaper. [See the pdf below.]

We earnestly hope that you and the consultant will consider these options while putting together a trade-off matrix for this project. While we haven’t done so yet, we are willing to hire an external consultant to estimate the cost of the currently proposed set of projects in the RAISE grant. Because of inflation, we are certain that building 3 bridges won’t be possible with this grant. In an effort to pre-empt last-minute project cuts or last-minute tax increases, we urge you to develop and review an unbiased trade-offs matrix that incorporates the suggestions from the public now. We are excited that this project has officially entered the “design phase” and are ready and willing to coordinate outside experts to help us make Manchester the best place on Earth for all people.

“The Bike Bus” – A story of adventure in the Queen City as a young girl encourages her family and friends to ride their bikes to school, inspiring a movement of change away from the automobile and towards active transportation. 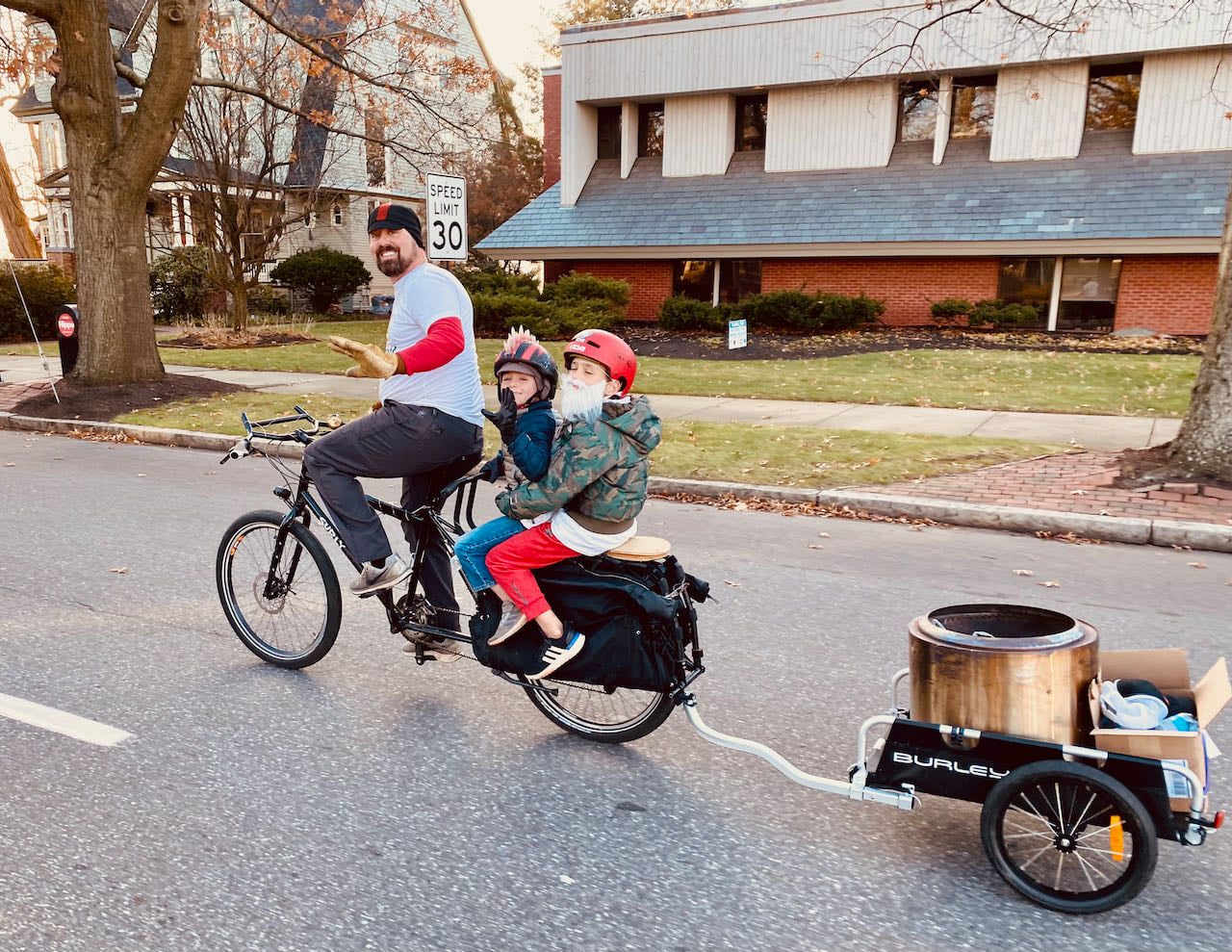 Jason Soukup lives in Manchester with his wife, Elizabeth, and outdoorsy kids. He serves as President of Manchester Moves Inc., a 501(c)(3)  neighbor-to-neighbor organization with a stated mission of connecting Manchester to all of NH through trails and greenways. Learn more here.