How do you capture the hustle and bustle, grandiosity, whimsy, and l’amour that is Paris? George Gershwin’s “American in Paris,” that’s how.

Freed, a longtime fan of Gershwin, created the film inspired by the orchestral composition of “An American in Paris.”

An ex-GI, Jerry Mulligan (Gene Kelly) remains in Paris, post-war, to satisfy his artistic ability. He falls in love with Parisian native Lise Bouvier (Leslie Caron) who unbeknownst to him, is engaged to his newly formed acquaintance of Henri Baurel (Georges Guetary).

When you contemplate the infinity of the cosmos it becomes harder to believe that we are the only intelligent life form within this universe. To imagine that there is a glimmer of possibility that somewhere out there, some other life form could be enjoying the light-hearted charm of watching Gene Kelly splashing puddles during his iconic “Singing in the Rain” number, may not be that far fetched of an idea.

Kelly, born in Pittsburgh, PA, and most famously remembered for his enduring performance in “Singing in the Rain,” is generally uncredited as a director and choreographer. In fact, Kelly directed over 10 films including, most famously, “Hello Dolly,” in 1964, starring Barbra Streisand and Walter Matthau. Kelly was a master in multiple disciplines of dance including tap, jazz, and ballet. Contrary to his counterpart, Fred Astaire, Kelly, an accomplished athlete, traded the traditional top hat and tails for slacks and T-shirts combining earthy, low-to-the-ground maneuvers, at a point and etheric balletic leaps, worthy of Balanchine at others, lending confident security to the observing every man.

Brought to Hollywood from France by Kelly for her first U.S. role of Lise, Leslie Caron, a professional ballet dancer, initially claimed she wanted nothing to do with the production, accepting the role to please her mother. However, it would not be her last film with MGM, Minnelli or Paris as the backdrop. In 1958, Caron appropriately garnered a lead role in the Academy Award-winning “Gigi.”  Introduced during the beginning of the film, Caron shows off her expertise in a series of vignettes of which censors found her dancing with a chair almost too seductive, a point of contention that Caron remains proud of. With her fluid and malleable style, it is clear to see why Kelly requested Caron as the female lead.

There is a narrative in the dance. It is impossible to discuss “An American In Paris” without referencing the 17-minute ballet, that concludes the film, a fantasy series of scenes where Kelly was able to indulge his directorial senses. It simply is a pièce de résistance.  A mostly kinetic performance, remaining true to form, dance sequences are staged within classic French artist’s paintings. However, there is one scene that supersedes all others and, after being viewed, unless informed, it is unclear if the ballet was created for Gershwin’s composition, or if Gershwin’s composition was created for the ballet. Kelly’s choreography is well thought out and purposeful.  The scene begins with Kelly and Caron’s silhouettes facing one another.

They are accompanied by the low robust brass of the orchestra. Yellow smoke billows in the background, accentuating the passion evident between the two. Kelly, offering his hand with a slight hint of trepidation while still self-assured, leans in and lifts Caron, softly enveloping her in his arms. There is desire in the wailing trumpet, emotions rise and fall as romance weaves its way through each change in the silken swirl of violins. They mirror one another, and because of the invisible ethereal chord that magnetizes them to each other, they only separate for brief instances. The artistic rendition of The Fontaines de la Concorde, the use of color and lighting, the orchestration, and of course, Kelly and Caron, it all comes together, interlocking in unreplicable seamless cohesion. Through orchestration alone, Gershwin relays an entire conversation of intimacy deeper than mere physical desire. We are listening to how true love is supposed to feel and when the orchestra swells, the composer meticulously utilizes the timpani to indicate emotion has ascended to a higher level. Gershwin’s composition, Kelly’s choreography, Minnelli’s eye and MGM’s version of Paris. The cocktail is exquisitely toxic.

If you notice a slight influx of Minnelli films covered in this series, there is a reason. They are artistically and visually superior. Known for plucking talent from Broadway, in 1940 producer Arthur Freed convinced Minnelli the then Art Director of Radio City Music Hall to join his newly formed Freed unit at MGM in California, where Minnelli would open a world of technicolor splendor. His debut film was the all-black cast 1943 musical, “Cabin in the Sky” starring, Ethel Waters, Lena Horne, Eddie Anderson, as well as a bevy of the who’s who of black Hollywood during the time.

When the character of Lise is introduced at the beginning of the film, as well as the “I’ll Build a Stairway to Paradise” number, Minnelli calls on his theatrical credentials. In presenting Lise, Minnelli uses color blocking similar to his 1953 film, “The Band Wagon” (another big-screen worthy musical). Notice the set reflecting Minnelli’s theatrical flair. There are no walls yet space is chicly defined.  During the “I’ll Build a Stairway to Paradise” performance, Minnelli utilizes what seems to be an infinite Folies Begere-esque lit stairway, with glamorous long-legged, headdress-balancing showgirls as ornamentation.

Grammy Hall of Fame inductee George Gershwin, known as one of the greatest American composers, grew up in Brooklyn, NY. Gershwin who was classically trained in the piano as a child created full-bodied complex unexpected harmonies, difficult to describe yet discerningly easy for the ear to interpret. His first song was published at the urging of belter Sophie Tucker. His body of work remains as a permanent songbook, renowned in orchestras throughout the world, including the enrapturing and aptly named,” A Rhapsody in Blue,” appropriate in its use, awakening the city of NY in the opening of Woody Allen’s Manhattan. Gershwin and his brother Ira furnished the music and lyrics based off of the DuBose Heyward novel Porgy that became the abiding all-black opera Porgy and Bess, which produced longstanding standard songs, the likes of “Summertime” and “I Love You Porgy,” sung, generationally, from Ella Fitzgerald to Christina Aguilera. In fact, when the title is entered into YouTube, scrolling may not end for some length of time. 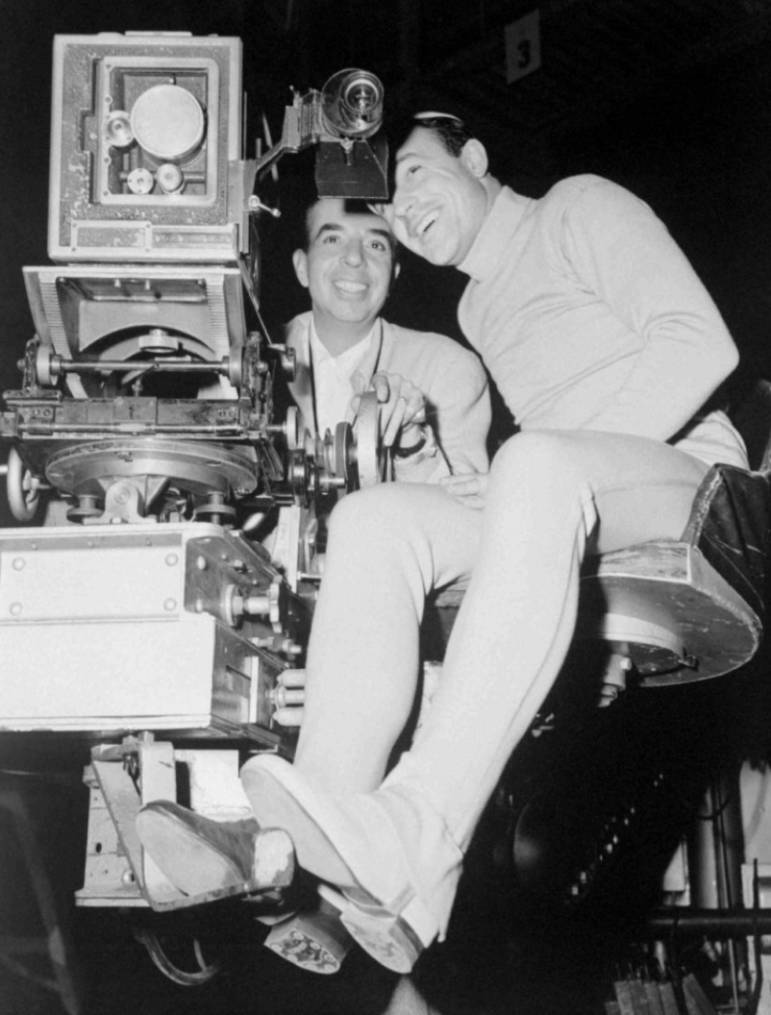 Born in Charleston, SC, lyricist, Arthur Freed joined MGM in 1928. He was an uncredited producer of “The Wizard of Oz”  convincing L.B Mayer, studio mogul to adapt the book for the film. After the achievement of “The Wizard Of Oz,” Freed began producing a successful series of “backyard” musicals directed by Busby Berkely, known for his overhead shots, starring Judy Garland and Mickey Rooney. But, it was his first technicolor film, directed by Minnelli, “Meet Me in St. Louis” that solidified his position as a credible producer. Freed, known for appreciating exceptional talent, used a simple formula. A fan of Broadway, Freed frequently coaxed artists from New York to MGM, creating the famed “Freed Unit” a self-contained cell of individuals, each exceptional of their craft, that consistently, and only worked together. According to Caron, “Arthur was somebody who insisted on quality in everything…he just went for the best,”  which solidified the Freed unit above others. His productions didn’t just work, they were almost infallible. It is this layering effect of individualized extraordinary aptitude that garnered the Freed unit three films listed on American Film Institute’s Top 100 films including, of course, “An American In Paris.” Ironically, Freed, who would produce iconic films such as “Singing In the Rain,” “Showboat” and “Royal Wedding” where Fred Astaire would defy gravity, has strong ties to the state of NH, as he graduated from Phillips Exeter Academy.

It is said that as members of the Freed unit walked into the commissary one day, Joe Pasternack, also an exceptional producer of such films as “Summer Stock,” 1950, starring Gene Kelly and Judy Garland, “Love Me or Leave Me,” 1955, starring Doris Day, and “On an Island with you,” 1948, starring Esther Williams, stated, “There goes the royal family.”

In 1951 television programming was in its infancy. The two most prominent forms of entertainment would have been the radio and motion pictures and despite their monopoly, instead of churning out dregs, MGM consistently delivered. These films were specifically created to be viewed on the big screen. It is true, many of the plots were recycled and in the end, they all met the same joyous conclusion- love wins. Still, there was a genuine reason why audiences applauded at the beginning of MGM films upon merely seeing Leo the Lion, as they came to know the caliber of expertise to expect, and to this day, these films, nonetheless, withstand.

Join TCM and Fathom Events on Jan 19 and Jan 22 for the viewing of “An American in Paris.”

You can watch the trailer below